So, it was a no-brainer decision for my cheat this week, right? I mean, duh, where the hell else would I be besides French Quarter Festival? Easily one of my favorite festivals of the season, this celebration…this daytime, suntime, springtime elation is all about the Vieux Carre. Everything you can find in this gorgeous historical district is brought out onto the streets (even more than usual), and served up at tents and open stages from the U.S. Mint over on Esplanade to Woldenburg Park next to the cool breezes of the Mississippi River. It’s like the Quarter amplified several times for four solid days and get this…this is the best part…it’s FREE!

I sound like a pamphlet.
Anyhow, I knew where I was going to eat this week ages ago, so John and I hit the streetcar and rode downtown for my 80th cheat at the 2011 French Quarter Festival. I gained 2 pounds and was feeling pretty guilty about it, but certainly not guilty enough to miss the festival. 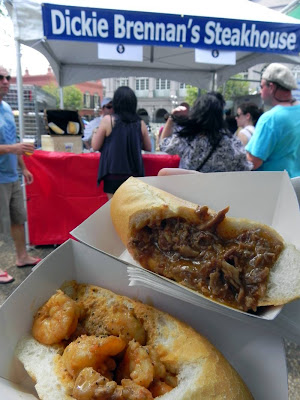 John and I were hungry before we left the house, so it didn’t take us long to dive right in. In Jackson Square under the bright mid-day sun, clutching our water bottles and bouncing to Connie Jones we spotted a menu we couldn’t avoid from Dickie Brennan’s Steakhouse. We got one of each, a Prime Beef Debris Po-Boy and Bourbon House’s BBQ Shrimp Po-Boy. Both were tasty, but I definitely preferred the juicy debris.
Inhaling the sandwiches, we strolled around the square, checking out the artists come out in droves for the fest. Every inch of wrought-iron fencing surrounding the square was adorned with artwork in a variety of mediums, but most featuring beloved, local icons from shotgun houses to a lone sax player wailing against a street lamp. I got a little distracted by some work by Sarah Jenkins, before John dragged my poor butt away from things I couldn’t have and steered me straight.
On the other side of Decatur Street, Gal Holiday was playing as we ambled slowly through the crowds. We stopped at a bench to just take in the refreshing, cool air blowing towards us from across the river and were treated to an impromptu performance as an older black man in a wife-beater t-shirt busted out his rendition of “When a Man Loves a Woman” on a microphone plugged into an old portable amp. He employed a lot of creative license with the lyrics, but he sang with such flair and intensity, it wasn’t long before a large ring of festers surrounded us, taking snapshots and dropping dollar bills in his box. Playing “for those who were listening”, he writhed around, squished up his eyes and sang his heart out…even when he messed up and started over again, people hung out and cheered him on. 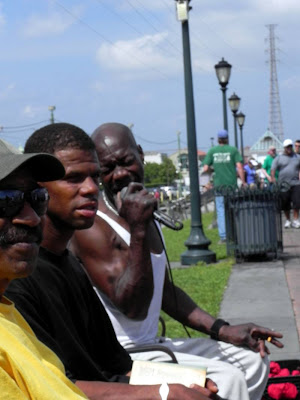 We left as he began “The Dock by the Bay”, seeking out some more grub. As we strolled along, I noticed more po-boys, crawfish bread, jambalaya, jerk chicken and crawfish pasta, but I had to stop when I reached Nola Restaurant for Miss Hay’s Stuffed Chicken Wings with homemade hoisin. Miss Hay was actually “in the house” as they say, replete with apron dishing out these decadent morsels that completely rocked my world. The chicken was fried perfectly and the extra, crispy skin was filled with sauteed veggies and it all came together so wonderfully with the salty/sweet hoisin….am I breathing heavy? Let’s just say I am still slapping myself for not ordering two.
We hit up Plum Street Snowballs, I chose Iced Coffee Cream while John slurped down a Peppermint, turning his mouth and lips a vibrant shade of green. Though pleasingly cool and sweet, I still wanted something a bit more decadent for dessert and that meant heading to the Flour Power Confectionery booth.

After watching them burn the caramel with a blow torch, I couldn’t resist getting a Praline Creme Brulee. Thick, caramel custard was ensconced in a crispy, buttery puff pastry tower and sprinkled with Praline chunks and brown sugar. It was the best part of heaven I’ve ever had the chance to eat from a paper plate and with a plastic fork. I could’ve picked the whole thing up and shoved it into my mouth, but I thought someone might recognize me and call me out.

Surprisingly full (we didn’t eat as much as I planned), we started to head out, walking back towards the streetcar, stopping at Jackson Square so I could buy a poster. Though I enjoy the work of local artist Tami Curtis-Ellis, I have a quirky little connection to Pete Fountain who is the main subject this year.  Remind me to relay that story another time…

Satiated, smiling and burnt (guess who forgot to wear sunscreen?), we rode the streetcar home under the resplendent green oaks as the sun was setting on what was yet another fabulous French Quarter Festival. Oh how I love this town…