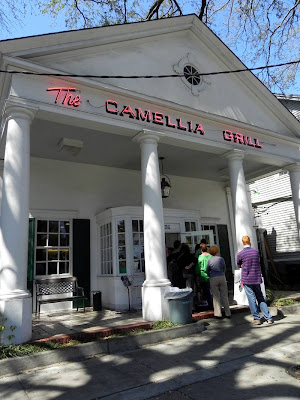 Open since 1946, The Camellia Grill has been a landmark New Orleans restaurant located near the end of the St. Charles Streetcar line in the Riverbend. Almost every time I have wandered past this ubiquitous diner, there has been a line of tourists patiently waiting to experience the food, and especially the unique brand of service, only to be found at the Camellia Grill. Though I’ve been to this restaurant many times in the past, I thought it was about time I blogged about it, so John and I visited the famous local diner on Saturday. Neither of us had been to Camellia Grill since before the flooding in ’05…apparently some things have changed.

We arrived at an odd hour, between lunch and dinner, so that we would (hopefully) get the full attention from our waiter and so that our picture-taking would annoy the least amount of people. Amazingly enough, there was no line and we walked right in and plopped ourselves down at the counter, which is the only seating at Camellia Grill for those not “in the know.”

Wanting to give the diner every opportunity to impress us, we ordered a couple specials from the modest menu and waited patiently while being entertained by the server/line cook banter that makes Camellia Grill so unique. Do understand that we weren’t expecting anything mind-blowing from our lunch, we know this is greasy diner food we are talking about here. But, we did expect or hoped for a luncheon experience similar to ones we’d experienced in the past.

I started by ordering a chocolate “freeze” seeing as I desperately needed a cocoa fix. John just got a Coke knowing I would be ordering another dessert later on. 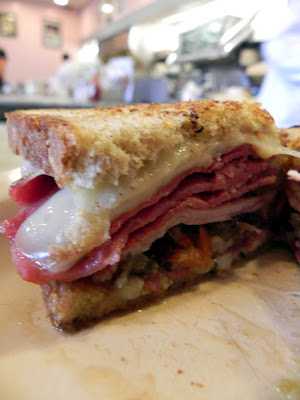 Our sandwiches came out rather quickly, John ordered the Camellia Muffaletta with corned beef, sliced ham, Swiss cheese and olive dressing on toasted rye. It was actually pretty tasty, but thought it was a tad small for the $8.50 price tag that did not include a side.

My sandwich, the Harry’s Yankee Special was roast beef, melted Swiss and grilled onions on a “special roll” and served with a mushroom sauce, the whole production being reminiscent of a French Dip. It bugged me a little that the sandwich was served on a plastic plate and the au jus was literally slopped into a plastic cup, most of which missed the cup and landed on my already highly disarrayed plate. Plus, I’m not quite sure what kind of “roast beef” they used, but it tasted strangely like the meat I found on a sandwich served to me in the Orleans Parish holding cells one misguided Lundi Gras evening years ago (another story for another time). The mushroom sauce saved it just enough for me to ingest (I was really hungry), but I later regretted doing so.

Finally, for dessert we shared a slice of Chocolate Pecan Pie which, surprisingly, was a decent pie. Much better than some Sysco versions we’ve been faced with in the past, but also not a slice of homemade happiness that never fails to wow me.

All in all, I was kind of hoping for something a little better, maybe next time I’ll just stick with the chili-cheese omelet or a burger and not set myself up for disappointment.