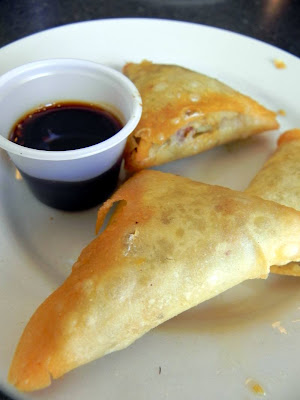 You’d think that by now I would have hit almost every restaurant in my neighborhood, but there are, in fact, a few I have had yet to patronize for no other reason than I simply had not gotten around to it yet. Last Sunday, I was able to put another notch in my belt when John and I visited Lebanon’s Cafe for lunch.

I can almost hear the anguished cries in my head and hunch my shoulders against the barrage of “What took you so long?!” Many, many, many folks have extolled the virtues of this South Carrollton Avenue eatery to me over the years, believe me, I know it’s a popular spot. But, to be perfectly honest, the plethora of “Mediterranean” restaurants in New Orleans make choosing one like looking for hay in a hay stack. In the past, my go-to for this kind of cuisine has often been Babylon over on Maple Street, not only for proximity, but because they make their own bread. It was time to try something different…

The restaurant was packed when we walked in, but seating ourselves, we managed to score a good table by the window up front. Our waitress was friendly and efficient, whipping out our drink and appetizer order in no time flat. We started with some Indian, vegetarian samosas that had a well-seasoned filling of potatoes, peas, carrots and corn wrapped in crispy phyllo. They were served with a pomegranate dipping sauce that was spicy, sweet, sour and delicious! There were only three, but they went fast. 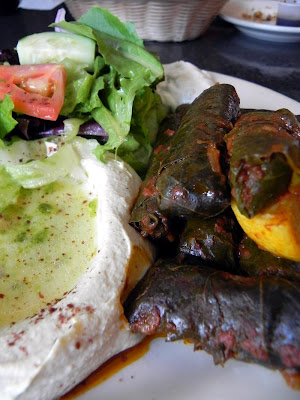 We also got a Spinach Pie which was a triangle wedge of house made dough stuffed with baby spinach, sauteed onions, sumac and lemon juice (For those who don’t know, sumac is a lemony-flavored purple spice that just happened to be a staple in the Ranjbar household.) and served with a fat dollop of labna (yogurt & mint).

Not long after the appetizers, our entrees arrived. John ordered the combination kabob with chicken, beef and lamb that came with a huge smear of hummus, the ubiquitous lemon and olive oil floating in the center, and a house salad. The best bite on John’s plate was a juicy hunk of ground lamb, that I’ll just bet was mixed with shredded onion before grilling.

I also got the hummus and salad, but for my “main meat” I opted for my absolute favorite dish growing up, stuffed grape leaves. I can’t tell you how many times I was sent out into the backyard where my father (and his green thumb) had a small grape vine grown specifically for the purpose of having fresh grape leaves. The dolma at Lebanon’s were a wetter version stuffed with ground beef and rice and then simmered in a light, tomato-based broth. Although they were quite different from what I grew up on, the dolma were still tasty, especially with another creamy helping of labna. 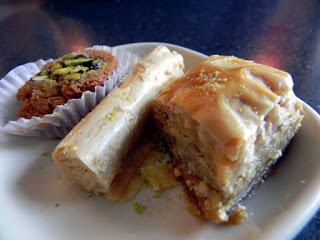 You know I couldn’t leave without trying dessert. Even though Lebanon’s do not make their sweets in-house, I thought they were all wonderful…you just can’t deny good baklava. I was craving a cup of (berry-licious) Persian tea to accompany the dessert, but it didn’t stop me from gobbling down those crispy phyllo and pistachio concoctions drenched in rose water syrup.