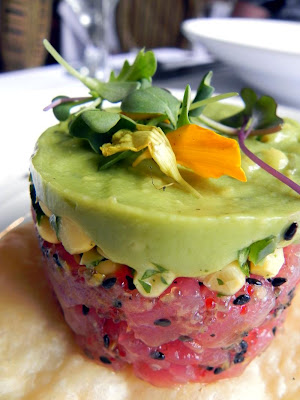 About a month ago, I got a press release announcing “Start Your Dinner at Noon” promotion at Le Meritage and I screamed aloud in ecstasy. John turned away from his computer to ask what the hell was wrong with me and when he spotted the new lunch prix fixe menu open on my desktop, he smiled at me and asked “So, when are we going?”

The first time we visited Le Meritage, which seems oh so very long ago, was one of those perfect dining experiences that remain permanently etched in our memory, something we continue to measure future meals against. The only difficulty that I could not overcome with this particular restaurant, was that of price. Now I’m not complaining really, I believe that the whole concept is a worthwhile experience, especially for the “wine noobs” like myself. Only, it’s something I simply cannot afford to indulge in on a daily basis, or even weekly…monthly? Then I see this new menu offering three courses for $21! Naturally, the wine pairings aren’t included in the cost, but still!

Last Friday John and I arrived for lunch rather late, around 2PM, right as a heavy summer rain started to fall.  We sat off to one corner next to the window and it was very private, though there were only two other tables occupied at this late hour. I got so excited about the prix fixe, I asked if I could add another course (cuz I’m a little piggy) and the server was totally accommodating. 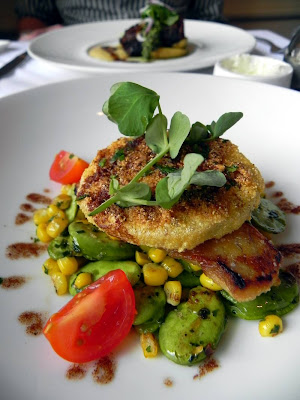 Just before John took way too many pictures of the cutlery laying in different patterns on the linen tablecloth, our first courses arrived. John had the Tuna Tartare Napoleon served in a neat cylindrical shape with bright green guacamole on top, a second layer of crisp kernels of corn and finally, a thick layer of seasoned and citrusy raw tuna all balanced on a crispy fried tortilla square. It was paired with a Santa Barbara Chardonnay. I greedily eyed his plate while quickly slurping my own, velvet vichyssoise with a tasty little heap of sweet crab meat in the center. Our server suggested I have California sparkling wine or “blanc de blancs,” which was tasty, but bubbly always goes straight to my head.

Good thing my next course was a bit heavier. Along with my soup, it was one of the day’s specials and my most favorite crab cake…in the world. Seriously. It’s a small tower constructed entirely of jumbo lump crab meat and big, luscious crawfish tails topped with a fresh wedge of avocado. The whole creation is held together by some mysterious force of nature because it is almost entirely devoid of breadcrumbs. You know that ingredient that seems to overwhelm most other crab cakes, thereby making them almost inedible? To me at least… 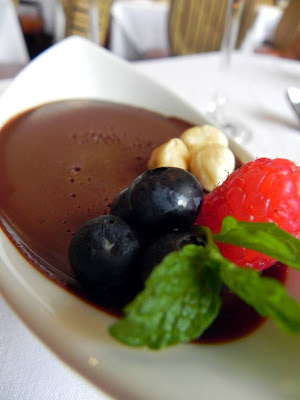 Being a bit obsessed with salads lately, John’s second course was a baby cabbage salad with golden raisins, Parmesan, sliced almonds and truffle vinaigrette. It reminded me of coleslaw, but with a stronger bite and not as much “juice,” but still delicious.

For our next course, I actually chose a Malbec, all by myself. The funny thing was, John got the same wine, but when they brought both glasses to the table, one tasted distinctly deeper and more layered than the other. According to the server, they were from the same bottle…was I trippin’? I may never know. Regardless, the good glass was wonderful and paired nicely with our dishes. John had the braised beef short rib and kept mumbling something about sauce as he licked his plate clean and I enjoyed the sauteed puppy drum with a fried green tomato balanced on top. There was also a citrus-laced lima bean succotash that I think I might have enjoyed more than the fish.

At last, it was time for dessert. John had a thick, chocolate “pot de creme” and I had Georgia peaches & cream. As basic as that dessert is, I had never actually eaten it before and I was amazed at it’s simplistic fabulousness (yes, that’s a word…just go with it). Paired with a rich, syrupy Moscato and a light, fruity Sauternes, they practically felt like two desserts for each of us!

Was it a coincidence that the rain stopped just as we stepped outside after yet another memorable meal at Le Meritage? I don’t think so…