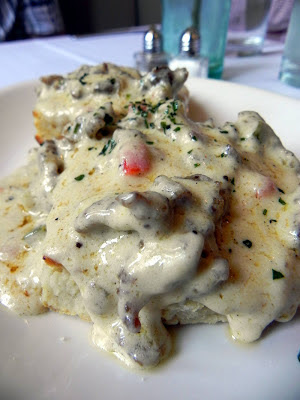 Okay, well maybe I am exaggerating somewhat, but they sure do offer a brunch deserving of a little exaltation. Craving breakfast, as we often do, John and I visited Apolline a few weeks ago for the very first time and while we didn’t start dancing naked in the street, wreathing onlookers with flowers, we certainly enjoyed ourselves.

We arrived at the beautiful Victorian house-turned-restaurant right on time for our reservation at noon. The simple, yet elegant, dining room was about half full with diners laughing over linen-covered tables and servers in long, white aprons crossing the hardwood floors. We were seated at a two-top next to closed French doors that let in soft, spring sunlight. After placing our order, we whiled away the time watching a group of laughing diners who were eating out front on the patio and admired the gorgeous peach roses in a vase on our table.

Before long, our appetizer arrived, a couple of fluffy buttermilk biscuits smothered in a rich, white gravy with crumbled sausage. Since we were both hungry and both big fans of biscuits and gravy, we devoured the dish in no time, carefully scraping up the last morsels with our forks and (when we thought people weren’t looking) our fingers. 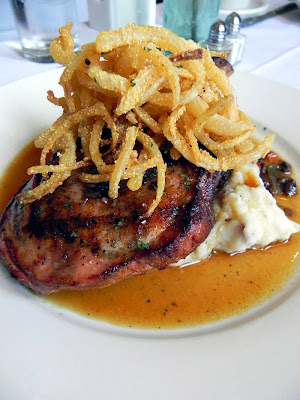 Our server whisked away our plate before bringing out our entrees in a flash. John ordered a juicy, Double-Thick Pork Chop with creamy mashed potatoes and crispy, fried onions and though it was moist, rich and decadent, he had difficulty finishing since he also ordered a side of Andouille & Potato Hash. Perhaps his eyes were a bit bigger than his stomach? Thankfully I, and my bottomless-pit of a belly, was there!

I chose the Eggs Apolline which featured a cornbread Belgian waffle, Jacob’s andouille sausage, peeled crawfish and two poached eggs smothered in a decadent hollandaise. I inhaled this oh-so-Cajun and delicious version of Eggs Benedict, scarfed a side of Beeler’s thick-cut bacon AND I helped John finish his breakfast. Yes, I was in heaven…well, I would have been if there were no calories in that feast…but we can’t have everything!