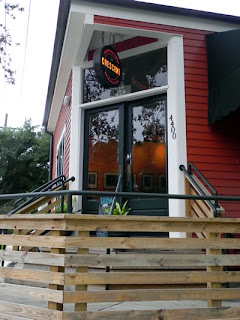 On Thursday, I decided that my self-inflicted punishment of no cheating was at an end.  I knew if I didn’t indulge this week, the proverbial dam would break. John would wake in the morning to find me sitting on the living room floor, covered in a sticky layer of Crunchy Cheetos cheese dust, surrounded by Hubig’s Apple Pie wrappers and bottles of strawberry soda. Suffering from a severe food coma, I wouldn’t even be aware that my shih-tzu, Pippin, was foraging for large crumbs of Pepperidge Farm Brussels in my hair while I drooled on myself incoherently. Like I’m saying, it would get ugly.

So in an effort to avoid a complete loss of self-control, John kindly agreed to treat me to dinner at Crescent Pie & Sausage located at 4400 Banks Street.  This is my 41st cheat, that is if you count my time in California as only one big cheat (a cheat vacation?) and miraculously, I am only two pounds heavier than my 39th cheat at Cafe Rani, putting me at a grand total loss of 58 pounds. 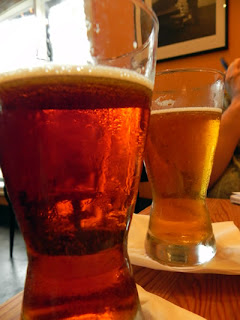 Even if Crescent Pie & Sausage wasn’t located near two distinctive landmarks — the Banks Street Bar and Banks Street Service Station (how cool is that building?) — the Crescent Pie would easily stand out on its own.  The long red building sports a huge, heavy wooden patio that gives it that lodge/smokehouse feel. I assumed they had seating outside, but I wanted to sit inside so I could get a glimpse of the chefs working in their cool, open kitchen.

We were only the second party in the restaurant when we arrived, but during the course of our meal, people filled in the small space rather quickly and there easily could have been more customers outside.  Our server kindly took our order and immediately brought our drinks, John got a NOLA Blonde and I chose Lazy Magnolia Southern Pecan. Both were delicious and a perfect start to our sausage feast. 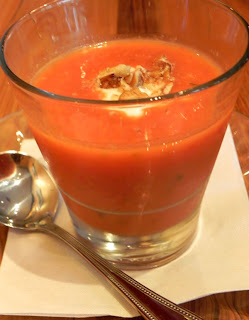 When we had placed our order, the server mentioned a special Watermelon Gazpacho and I convinced John that I just had to try a cup.  It was so cool and refreshing, chunky watermelon with tomato, garlic, onion, cucumber…all the fresh ingredients for a great gazpacho….plus a thick vein of sour cream running up the middle of the bowl so you tasted it in every bite. We both thought it was excellent and finished it to the last spoonful.

Our appetizer came out at the same time as our entrees, but a Duck Confit Meat Pie doesn’t come across my table everyday and I couldn’t help breaking it apart almost immediately.  The duck was moist and the crust was dense and crispy, it makes my mouth water writing about it.  A sweet tomato chutney served alongside the pie was so tasty that John and I ate the rest after the pie was gone.  I guess we were supposed to put the chutney on the pie? Ha!  Either way, it was delicious. 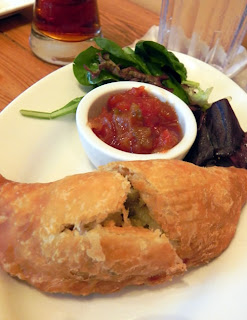 At last, we were able to focus our attention on our entrees, the likes of which were no easy feat to ignore.  I went “whole hog” (can’t I at least say that once?) with a Mixed Grill offering three house made Lil’ Smokey’s smothered in house made BBQ sauce, a large house made link of boudin and a thickly sliced link of house made andouille sausage.  Did I mention it was house made?

All kidding aside, they were fantastic and it was heartily evident that Breaux Bridge born Bart Bell (say that three times fast) was the culprit behind the luscious links. I especially enjoyed the boudin, but all of them were so good, I had no difficulty devouring everything on the plate…well, what I managed to eat before John started in on it.  Don’t think I didn’t wrestle a hunk of his Sausage Burger (*cough house made) and a few of his dill potato chips…that were…well…made in house. 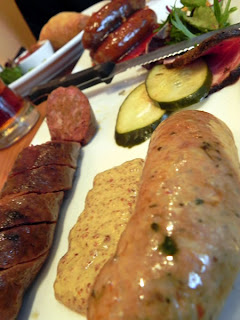 There was no way I was leaving the lodge without having dessert and I took it as a sign when our server literally gushed about (…say it with me) house made Donut Bread Pudding with white and dark chocolate sauce.  Strangely enough, when the dessert arrived it almost looked like a bubbling slice of cheesy lasagna, but it most definitely didn’t taste that way.  It was awesome!  Gobs of dark and white chocolate, doughnuts, cinnamon, butter…I had died and gone to fat-girl heaven. Although I still ended up in a semi-food coma, I was coherent enough and able to keep my dignity intact

When I came home later that night, I saw Crescent Pie & Sausage on Facebook offering “Free Sausage Thursday” where they give you a free link of sausage for every $25 you spend.  You guys owe me two links!  Don’t worry gentleman…I will most definitely be back.  By the way, I’ve been looking for another breakfast spot and Huevos, which is right next door to Crescent Pie & Sausage, has been in my sights for some time now.  Can I trade the sausages for a Blue Jay Special?