A couple of months ago, John and I were invited to a Speakeasy Dinner at Arnaud’s. Neither of us were sure about going, I mean, would we have to learn a secret knock? Would we have to dress in 20’s attire? Do we have to stay “in-character,” like a prohibition-esque LARP game? Do I have to learn the Charleston? To our relief, the only requirement listed was knowing the knock…so, we practiced. 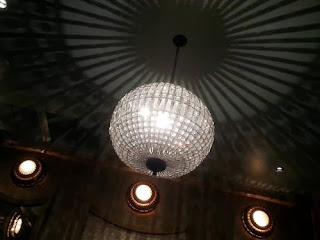 Instead of heading to the century-old restaurant on Bienville Street in the French Quarter, we were instructed to enter at few doors down at The Creole Cottage, a dining room I’d never been in before. Arnaud’s took an early 19th century cottage and transformed it into an elegant, yet intimate dining room, perfect for parties…just like this one. We stepped out of the cab and approached the French doors, a doorman with a clipboard asked for my name and after checking us off of his list, opened the door.

“Don’t we have to knock?” I asked. “We practiced!” He chuckled and told us we could if we wanted to, but by that time we were being greeted by another server inside. We were drawn into the elegant room, smiling faces were reflected in gilded mirrors and elaborate patterns of light and shadow rained overhead from the gorgeous glass (or crystal?) chandeliers. Although it was a “speakeasy” dinner, the only cocktail we had that night was a deliciously strong concoction served in ceramic coffee cup and then wine pairings during the of the meal. 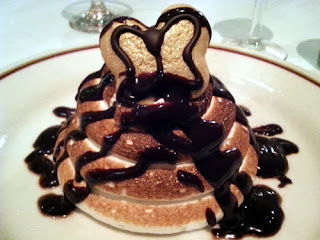 The dinner was five courses of classic Creole dishes, my absolute favorites were at the beginning and the very end.  I politely inhaled the first course, a creamy, Crabmeat Ravigote with fresh, local lump crabmeat tossed in a house Creole mustard, mayo and capers. After all the wine (they refilled our glasses if we drank faster than we ate), I am pretty sure I recall clapping my hands in glee when they set the dessert before us, a personal Baked Alaska with peppermint and French vanilla ice cream served with chocolate sauce and a golden, meringue butterfly on top. But, and no offense meant towards the chefs, this dinner really wasn’t about the food…

Likely one of the most singular, most recognizable characteristics of this town is its ability to party. People in New Orleans really do love to “go all out” and they aren’t the ones you see reeling in a stupor on Bourbon Street. Well, to be fair, most of the drunks on Bourbon aren’t local. The really great parties in this city are the ones where folks spend hours and hours, lounging in a dining room, crossing tables to chat to friends, drinking and eating to your heart’s content. A New Orleans party, a great one, always seem evoke a 20’s-style feeling where people really talk and get to know one another and conversations have their own rhythms that float with the music and the cuisine and the wine, and time doesn’t seem to be moving or standing still, it just is…that’s what this night was about. Plus, the people at our table were so cool, everyone laughed and talked to everyone… all evening…all eight of us. It was a blast. My only complaint was that we all had to finally get up and go home…oh…and I didn’t get to do the secret knock.