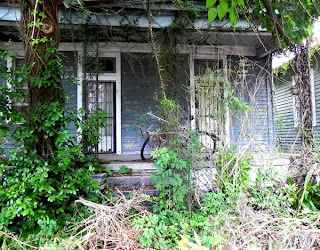 I’ve always been fascinated by the supernatural.  Ghosts, spirits, and poltergeists became a small obsession of mine, especially when I was younger.  Books relating “true” ghost stories and haunted houses littered my shelves and captured my imagination.  Quite often, these stories would take place in a small rural neighborhood, completely unlike my own but quaint and romantic, where everyone knew everyone else.  There would always be one house or building in the neighborhood that was abandoned and neglected, a target for vandalism and a source for urban legend…not to mention ghosts.

When I would put down the books and explore my own hometown, I would frequently be disappointed.  There really are no abandoned properties in the Bay Area.  Every bit of space that can be used is used.  No property ever stands empty for long, especially houses. 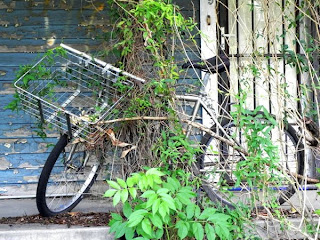 In New Orleans this is simply not true.  There are abandoned properties just about everywhere you look like old warehouses, abandoned homes, half demolished buildings and weed-infested lots. This is not a recent phenomenon either, these abandoned properties were around well before the flooding in 2005 and still exist today.

There is one home in particular that I can’t stop thinking about.  Right on the corner of Magazine Street and Audubon, there is a double shotgun that is so overgrown with ivy and brambles that I point it out every time my boyfriend and I drive by.  Nearly every single time we pass it, hundreds of questions roll through my brain and fantasies arise about the owners…or lack thereof. 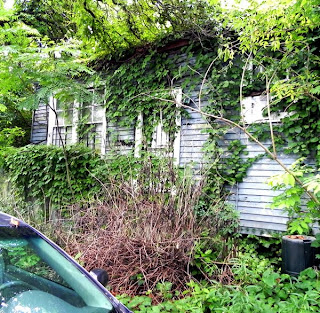 Where are the owners?  Are they still inside the house?  Do they still haunt the empty rooms?  What do the neighbors say about this property?  What are the rumors? Did a murder take place behind the ivy draped walls? More than one?

There is a nice bike with a basket leaning upright on the front porch that has ivy growing through it, but is bereft of a chain or lock.  I know this is a terrible question, but why hasn’t it been stolen?  Are thieves even afraid to approach this house?  Perhaps the hip-high brambles are enough of a deterrent…or perhaps something else entirely frightens them away.