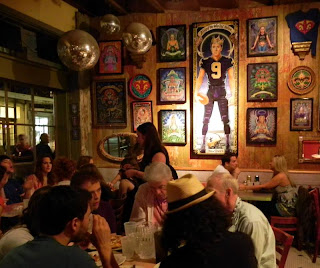 On the day of Krewe du Vieux, John and I had the notion of getting to the Quarter well before the parade to enjoy an early dinner, but we didn’t count on several different factors. First, the streetcar had mobs of people at every stop from Burthe on Carrollton Avenue all the way to Canal Street. I am pretty sure the drivers are instructed to cram as many folks as possible onto each car because most of our hour-long ride was spent squished between eager tourists heading downtown and locals who were just trying to get to work on time.

When we finally arrived, we stepped off of the streetcar only to see that the Quarter was overflowing with people! I don’t know why I expected it to be any different, but needless to say the time it took to hike through the crowds to reach the other side was certainly not factored into our equation — not to mention a little backtracking when we realized we had forgotten to pick up some cash from the bank. By the time we neared Aunt Tiki’s Bar, every restaurant we had passed was chock-full except for one, Angeli on Decatur. This was my 74th cheat and I am still treading water at a loss of 80 pounds.

I’m not saying that Angeli was empty by any means. The only space available in this late-night eatery were a few stools at the bar, but since both John and I were getting a little bitchy from a lack of nourishment, we decided to cut our losses and grab a seat. 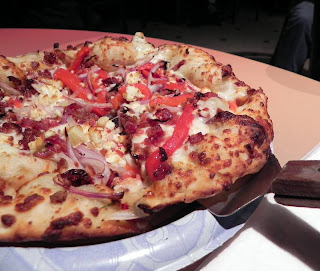 The servers were running around like chickens with their heads cut off, trying desperately to attend to a packed house, so it didn’t bother me that it took a little while to get noticed. At last, we were offered menus and brought a couple of Abita Ambers…in go-cups, of course. It wasn’t hard to choose dishes from the simple menu, ravenous hunger being our guide, though I was disappointed by the lack of a particular chicken appetizer (*Divine Portabella) I had once enjoyed there long ago.

While waiting for our food, we managed to snag a vacated table as my ass was far too big for the precarious stools at the bar. Angeli, in case you’ve never been, sits on the corner of Decatur and Governor Nichols with huge floor to ceiling, paned-glass windows offering a wide view of passersby. This aspect was especially interesting due to the impending parade, but when are there ever dull denizens roaming the Quarter? While admiring the art on their wall, especially a rather reverent image of Drew Brees, our pizza arrived.

We ordered a small Mystical Pizza (why does Julia Roberts pop into my head?) created with a garlic-herb sauce, mozzarella and feta cheeses, sun dried tomatoes, red onions, roasted red peppers and bacon. Overall, I thought the pizza was quite delicious with a crispy, cheesy crust and a healthy amount of ingredients. The only thing that bothered me was the presence of canned, stewed tomatoes that weren’t listed in the menu description. 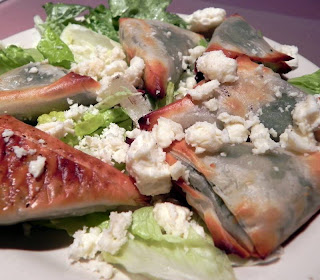 Since they were super-duper busy and people were coming in off the street in droves to either use the restroom or grab a drink at the bar, I wasn’t too bothered when our server unexpectedly arrived with our check. Not only did she fail to ask if we desired anything else before ringing us up, she completely forgot the appetizer I ordered.

Eager to please, she apologized with a sincere smile and rushed off to the kitchen to put in the order. We still had at least a half-hour before the parade made it’s way to that end of Decatur, so we relaxed and ordered a couple more beers.

When the appetizer arrived, I was a bit turned off by the appearance. They were Spinach & Feta Triangles, basically Spanikopita, which I have made myself hundreds of times. The flavor was quite good, but the folded, phyllo triangles didn’t have enough time to cook, leaving us with partially browned, partially pasty-white dough.

Though it seems I am coming off too harsh for a quick bite at a late-night eatery that was literally slammed for the Krewe du Vieux parade, I am really not taking it that seriously. It was a convenient, tasty and highly affordable cheat that I do not regret indulging upon and I most definitely wouldn’t hesitate to visit Angeli again…but perhaps next time I’ll come on a less bustling occasion.

*Apparently, the Divine Portabella appetizer is taken off the menu during Mardi Gras parades. Thank goodness it’s not gone! It’s one of the best dishes they offer in my opinion…