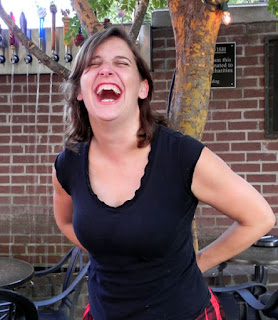 Inching ever forward in my “crawfish boil” quest, I met with Anne Baker several days ago to enjoy a few beers and get the “dirt” on the woman who has her hands in the soil of the city.  You see, Anne is quite possibly the foremost local authority on sustainable/organic farming in New Orleans.

Born in Lake Charles, approximately three hours west of New Orleans, Anne lived in many different cities like Ormond Beach, Florida; Jefferson City, Missouri; Evansville, Indiana and all over Dallas, Texas; but she always knew that she wanted to live in the Crescent City.

“We would come here on vacation and when I was five years old, I remember seeing a brass band for the first time and feeling that trombone…you know those low notes that shake your breath…” Anne said. “I remember going to Jackson Square and seeing the pigeons…Cafe Du Monde…and I just knew that when I saw that brass band, I was like ‘I’m movin’ here when I grow up.’  That was it.”

Even more amazing, Anne vividly remembers seeing world famous jazz trumpeter “Dizzy” Gillespie perform at Preservation Hall when she was just a little girl. “I distinctly remember because I said ‘Ma, who is that guy with the big, puffy face?’ He looked like a bullfrog and he had that bent horn and I remember him calling me up and I was dancing by his horn, and he kept playing with me…”

The rhythm of New Orleans had firmly embedded itself into her soul, but it wasn’t until 1992 that she finally came here to live.

If you’ve ever met Anne, you’ll agree that one of her most distinctive features is a radiant smile.  It was with this infectious grin that she recalled her first digs in New Orleans.  For only $200 a month, she and her boyfriend (at the time) were living in a double shotgun, camel back house on 8th Street in the Garden District.  At first, they tried to renovate the old building with some minor repairs, but it all got to be too much when the plumbing and electricity began to fail and when they started to see the sky through the ceiling on the left side of the house!

When I finally stopped laughing, I asked Anne about the origins of her interests in organic farming. Apparently, Anne spent a lot of time with her Cajun grandmother who lived in the rural town of Sulfur, Louisiana.  While they weren’t exactly farmers, they had a few cows and a flourishing vegetable and flower garden.  When comparing the fresh ingredients she ate at her grandmother’s house to produce she found in the grocery store, Anne was always disappointed.  She realized that if she wanted fresh produce, she would have to grow it herself.

After working in a Garden Center, Anne knew that organic was the “way to go” because using conventional products (pesticides) always induced some sort of ecological “backlash.”  For example, if you used a pesticide that killed all bugs, it wasn’t long before the “bad” bugs would come back even stronger and spread disease.

It wasn’t long before she was offered a job to run a certified organic farm and nursery at Arc of Greater New Orleans, the local chapter of a non-profit organization dedicated to serving people with developmental disabilities.  At the time, it was the only organic farm in the entire Gulf Coast. Anne also opened another organic nursery in Metairie for Arc and supplied the landscape department.  They would sell the potted plants from the nursery in a retail store front and in garden shows.  But all of the plants Anne grew in the ground, she would sell to local chefs.

After the floods in 2005, Arc scaled down their businesses, including the gardens and nurseries.  Luckily, Anne was hired by the Food & Farm Network, making sure low income families had access to fresh produce and also worked on local and national food justice issues. Later, she opened a farm in Gentilly in the 7th Ward as part of Parkway Partners‘ effort to help folks open community gardens by obtaining permission from the city to grow on empty lots, installing water meters, etc.

Today, Anne works for Mat & Naddie’s in several different capacities including public relations, bartending and waitressing.  She also successfully convinced chef and owner Steve Schwartz to start a garden specifically to grow fresh produce for the restaurant. They even hold sustainable gardening workshops from time to time at the homelike, riverside eatery.

When I finally asked Anne about her first crawfish boil, she replied “I can’t really recall the first time. But I do remember that we would always go to my grandma’s house, and I’d go play in the ditch and bring little crawfish out and say ‘can we eat these?’ And she’d say ‘No…they’re only an inch long, we better wait for them to grow.'”

She said that she often went with her grandfather in his boat or pirogue and would go “oyster dredging, shrimpin’, fishin’ and bullfrog giggin’.”  Never having heard the phrase “bullfrog gigging” before, I asked Anne what she meant.

“You take a trident-like spear and a flashlight and you shine the light into the water and the bullfrog’s eyes will reflect back.  Then you take the trident (this is pretty brutal now) and you stab the bullfrog…and then you have frog legs.  Alligators eyes reflect back too, but they are a different color and you definitely, do not want to stab an alligator in the head.  It ain’t nice…nothin’ pretty”

When Anne attended her first boil in New Orleans, it had been many years since she’d eaten crawfish, but I suppose old habits die hard because the knack for peeling them came back to her in a matter of moments. “I out-peeled everyone at the table. I find myself again and again eating crawfish or crab and I start to feel kind of guilty because I fly through them, I can do it in my sleep.”
Then she smiled and said “I definitely suck the heads early on in the boil, but then I quit because a lot of times it gets too salty or spicy by the 2nd or 3rd batch.”
Posted on September 2, 2010 by admin 0