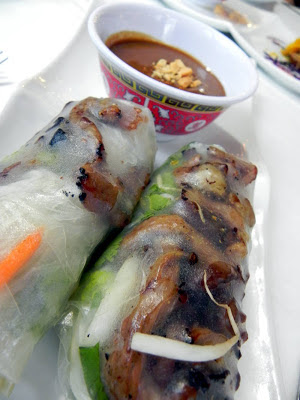 I’ve raved about how awesome my neighborhood is many times, but I can’t stop heaping on the praise when new shops and restaurants keep opening within mere blocks of my apartment. For example, a few weeks ago, my friends Anne and Candy accompanied me for a late afternoon lunch/dinner at Ba Chi Canteen.

For a long time, good Vietnamese cuisine could only be found on the Westbank, but in the last few years, the East Bank has seen an explosion of Vietnamese restaurants, much to the delight of people like me who can’t easily take a trip (no car) across the Crescent City Connection to indulge in a little pho therapy.

Just recently Ba Chi Canteen opened on Maple Street, a mere six blocks away from my apartment and I was dying to go try it out. The new restaurant opened in the building that housed Figaro’s Italian Restaurant & Pizzeria, right across the street from another delightful newcomer Satsuma Cafe. The skies were dumping rain when Anne, Candy and I scrambled into the half-empty restaurant, but we were not deterred and ready to eat! We had a tough time narrowing our choices, so we let go and ordered a lot of food. 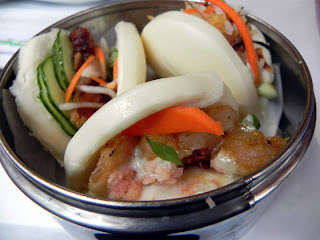 We started with two different rolls, an order of shrimp spring rolls and their crispy pork egg rolls. The spring rolls were fresh and hearty, stuffed with lots of herbs, vegetables, rice noodles and large, delicious shrimp. But, the star of the show had made itself known when we took our first bite of those incredible egg rolls. Now, folks who have been to Tan Dinh have experienced these mind-altering rolls before, but for me, Anne and Candy, this was a brand new experience. The rolls were crispy and browned on the outside and filled with incredibly well-seasoned pork on the inside and we simply couldn’t get enough. They were the best egg rolls I’d ever eaten…hands down. 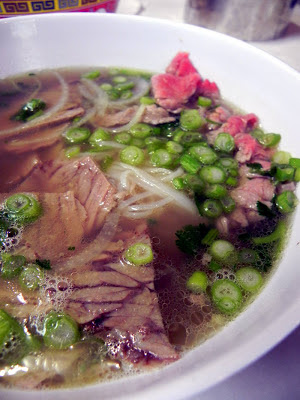 The rest of the dishes all came out in a flurry. We ordered three of their so-named “baco’s,” or Vietnamese tacos. There were three different flavors; ba chi or pork belly, honey ponzu shrimp and coconut curry shrimp. While all of the “bacos” were delicious, the price shocked me. It was $3.25 for ONE of the shrimp “tacos.” I thought there would at least be two or that they would be larger than I imagined. Hopefully they’ll consider changing that price in the future.

We all got different entrees. Anne and Candy both ordered pho, Anne the combination with rare flank, brisket and beef ball while Candy stuck with the rare flank only. Both soups smelled wonderful and I got a few tastes, but Anne complained that the broth didn’t “hold up” well, as the flavor strangely diminished in complexity as she was closer to finishing, something she’d never experienced before. I’m going to have to go back for my own bowl of pho to find out for myself. 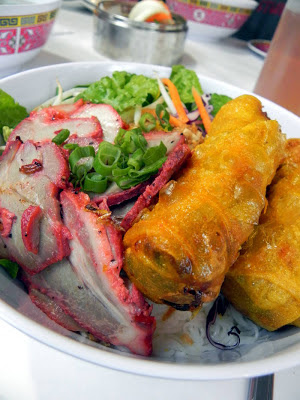 I chose to have a vermicelli salad bowl with egg rolls (I had to have MORE!) and charbroiled pork. I enjoyed it thoroughly and freely doused it in fish sauce and sriracha, something I always add to this type of dish. We also received the traditional plates of fresh vegetables and herbs (basil, bean sprouts, jalapeno, etc.) to add to our entrees at will. I was the only one who couldn’t finish my food, but I brought it home to John (along with a pork belly bahn mi). We will definitely be back, especially since it’s so close by. I love how my neighborhood just keep getting better!