“Coffee is the best thing to douse the sunrise with.” ~Drew Sirtors

A perfect cappuccino with truffles and raw sugar at Bayona… 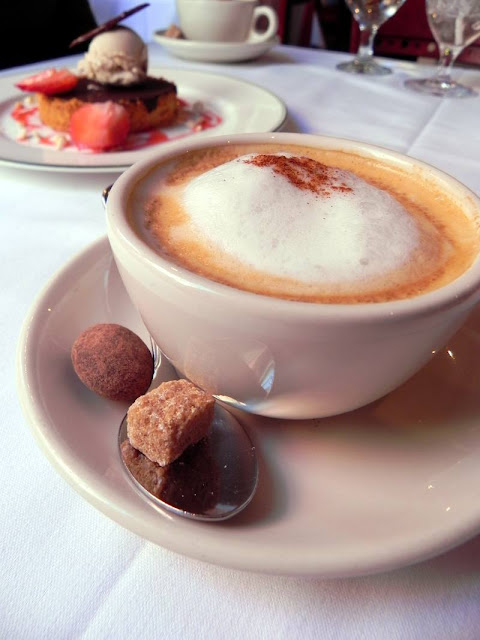 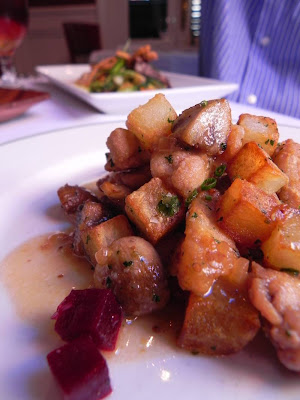 When going out to eat in New Orleans, there is one topic that never fails to come up, as a matter of fact, it usually dominates the conversation. That topic is food. Yes, while forking a decadent dinner into our maws, we’ll be gabbing about another meal we are planning to eat in the future or raving about what we ate for breakfast that morning. Now John endures my endless chatter about food all of the time, but last Friday at Bayona, we met a sweet couple from Monroe who might as well have been sitting at the same table.

Thanks to our reservations, we were seated straight away and it was John who noticed the little plaque on the window sill stating that we were sitting at “Uncle Hank’s Table.” As we discovered it, an older gentleman at the next table said “Yeah, and did you know they say he’s never used it?” Laughing, we struck up a conversation about food, restaurants and cooking that lasted almost the whole meal! Well, except while we were eating, then it got real quiet… 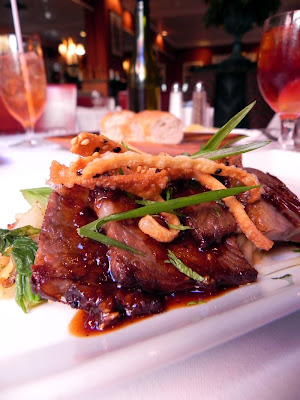 While selecting our appetizers, I took a huge leap of faith and ordered Pan-Fried Sweetbreads. If you recall, the first time I ate sweetbreads, I was pretty nervous and though I said I would eat it again, I have never ordered it since, even though I have had plenty of opportunities to do so. But as I perused the menu, I heard the waiter talking about the dish, saying it was an immensely popular, signature Susan Spicer recipe and I just couldn’t resist. The crispy, pan-sauteed sweetbreads with tiny cubes of potato and juicy mushrooms were drizzled in a sherry-mustard butter sauce and topped by even smaller cubes of beet. As it turns out, the sweetbreads were likely the highlight of our entire lunch!

John greedily eyed my dish while trying to appreciate his own, a Grilled Kobe Beef Brisket. The moist and tender, hoisin-soy glazed beef was sliced and served with peanut noodle salad and a few sauteed veggies. Though I appreciate the attempt, the dish tasted kind of amateur, like the person who cooked it had never prepared Asian cuisine before. C’est la vie! The dish was by no means terrible, just kind of sloppy for an environment like Bayona. 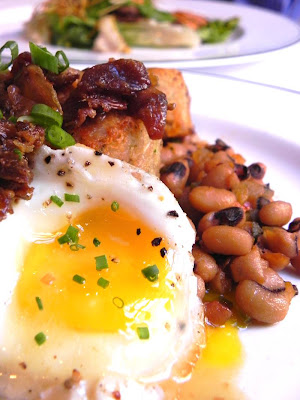 Waiting for our entrees, we eyed our neighbor’s plates that had just arrived and one of them looked so good, I almost changed my order. It was a mixed grill with half a stuffed quail, andouille sausage and crusted lamb loin. It made me drool a bit and I covered by taking a big swig of my ginger beer before anyone noticed. At least our entrees arrived in good time to distract me.

I chose Fried Eggs with Pheasant Rillette Cakes that came with smothered collard greens and black-eyed peas. There were also thick, crispy, smoky hunks of pheasant sprinkled on top that were so good, it was like pheasant-bacon. What can I say? It was wonderful and I had no difficulty gobbling it all down. John enjoyed a few well-composed bites smeared into the gooey yolk and declared it good, but he thought it was a bit salty. Though, I didn’t see that stopping him when I offered another bite. John opted for the Grilled Wild Salmon with a sundried tomato orzo, wilted escarole and sweet pea sauce. The perfectly-cooked salmon tasted bright and fresh, emphasized by the green taste of the pea sauce and this dish, too, quickly disappeared.

At last it was time for dessert and instead of waving the thought away, John quickly agreed with my choice of the Chocolate Caramel Hazelnut Tart with Earl Gray ice cream and fresh strawberries. I felt like a stuffed hobbit, “filling in the corners” while we slowly dug into our decadent dessert that was thick with rich chocolate and caramel and all I could think about was “Where am I going to eat next?”