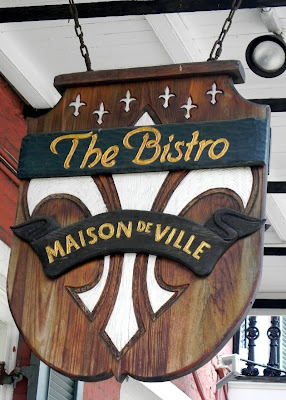 Everyone knows by now that I am not one for fancy dress. I will make a sincere effort at not looking slovenly, but I do not own any high-heeled shoes and, since I have not worn it for over a decade, I am pretty sure I have completely forgotten how to put on make-up. It is for this reason that I choose to dine at the more casual lunch hour when I can don a pair of jeans and a slightly sexy blouse, and yet still be admitted to some of the nicest restaurants in town.

But this past Friday, I almost thought they were going to turn us away when we stepped inside The Bistro at Maison de Ville.

A feeling of fear and self-loathing began to permeate my usual confident facade when the maitre’d asked us, his nose in the air, if we had made a reservation while he proceeded to evaluate us head to toe. We barely passed muster, though, and were seated at a table right in front of the door. You’d think if we didn’t look appropriate enough to dine there that they would have wanted to hide us in the back, but what do I know about hosting strategy? 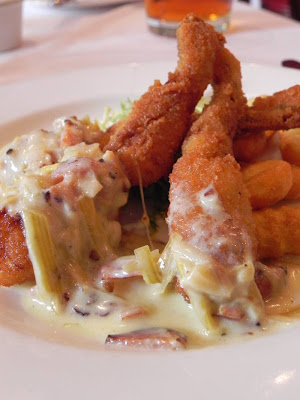 We did our best to ignore the “better than thou” attitude, sat down and decided a drink was in order. John got a Sazerac, Anne tried their version of a Pomegranate Mimosa and I chose the Dreamsicle with orange-infused vodka and peach schnapps. Much tension was released after that first sip. We were relieved by the alcohol and the server was eased in the knowledge we were there to enjoy.

We started out with two appetizers to share and the first to arrive was their Flash Fried Calamari tossed in a spicy orange and Maytag blue cheese glaze. Unfortunately, the calamari was room temperature and a bit soggy. The glaze, though it sounding delicious in theory, didn’t really mesh well on my tongue and the whole dish was bittersweet…pun intended.

Our second appetizer was really quite delicious, Fried Frog Legs in a bacon-leek cream with crispy gnocchi. How can anyone go wrong with bacon and cream in the same dish? My only wish was that there was more of it! Only three frog legs for $13? Oh well… 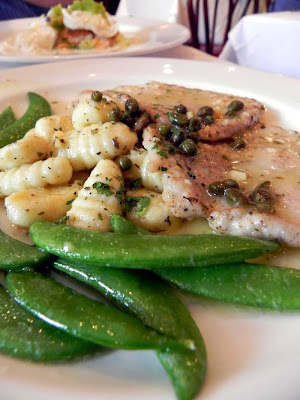 Between courses, we watched other diners file into the restaurant and it seemed that they were all well-known by the staff. Not only was almost everyone in there a “regular”, but it seemed that we were the youngest table in the restaurant by at least 20 years. We were a little grossed out observing the maitre’d sweat right through his thick jacket in less than an hour, but thankfully he didn’t come near us again until it was time to clear our plates from the table.

Our entrees came out of the kitchen all at once as we sat pondering whether the matire’d had a change of clothes ready behind the bar. Anne’s Duck Breast “P.B.J.” sandwich was probably the most interesting dish, wheat toast piled high with juicy duck, spicy peanut butter and melted Fontina, but they smeared a pepper jelly on top that made for sticky handling. John’s dish of Smoked Salmon was sadly a complete disappointment for him (and for us tasters). Though we imagined the smoked salmon to be raw, like lox, it came out overcooked and dry. The “Creamy Tobikka Remoulade” and yolk from the poached eggs helped a bit, but the flavor was decidedly lacking. Not to mention, the dish was completely devoid of the crispy bacon mentioned in the menu description.

As it turns out, I was most pleased by my dish, the Pork Scaloppini. Three delicately thin slices of pork were swimming in a delicious sauce of white wine, lemon, butter and capers and served with gnocchi and still slightly crisp (just like I like em!) sugar snap peas. I even asked for extra bread so we could all soak up the lemony, buttery goodness that was left on my plate. Maybe I am becoming a bit of a food snob, but I was still a bit irked by the gnocchi, which was too chewy and obviously not house made.

Maybe it’ll be better next time if I dress up in my best outfit and slap on a little lipstick?