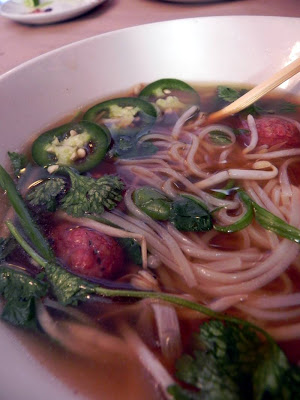 We’re barely into 2012 and I am already lagging on posts, but I promise I won’t make it a habit! I don’t usually make resolutions as it only provides me the opportunity to break them, but I intend on making a sincere effort to post more this year. That being said…

For the past several weeks, I’ve nursed a serious yen for some pho, but since I simply can’t condone a a $30 cab ride for a $8 bowl of soup from Pho Tau Bay (as fabulous as it might be), I’ve shoved my cravings into a corner. Last week, in an effort to save money, stay closer to home and still have a fantastic meal, John and I decided to walk over to Boucherie and have lunch. Though the pho itch was still floating in the back of my mind, it was the last thing I expected to see on the menu in the cute, lilac house on Jeannette Street.

It may come as a shock, but I actually made reservations this time and I must admit, it felt incredibly good when the waitress pushed past the crowd of snooty patrons at the door (this one woman wouldn’t even deign to look at me after I held the door open for her) and ask “Are you Miss Kim? Your table is right this way…” That pretentious lady looked at me then, oh yes indeed. 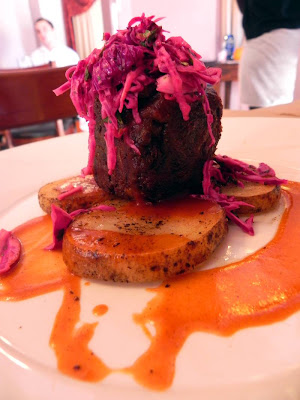 We sat down and were looking over the menu noticing all the little changes when lo and behold, I spotted pho as a “small plate” and I had no choice but to give it a try. We placed our order and watched while the pompous woman ogled our spot with obvious jealousy and irritation…much to our pleasure.

To start, John chose the Grilled Romaine Caesar Salad that came topped with thick shavings of Parmesan and bright green, basil croutons. It’s been on the menu at Boucherie for a while and I had tasted it before, simple and delicious. My dish was, of course, the Pho with Smoked Lap Chong (dried pork sausage) meatballs and rice noodles. Along with the bowl of steaming soup, they served a plate with fresh basil, mint, sliced jalapeno, bean sprouts and a couple of squirts of what was unmistakably Sriracha and hoisin. While I loved the presentation, the ever-present aromatics like cinnamon and star anise, and what I am sure was a very trying recipe (making the broth for pho is more than arduous), the flavor fell a bit short of what I was hoping for, lacking the many-layered, meaty depth that is so often found in a typical Vietnamese pho. I certainly applaud the chef on his effort. 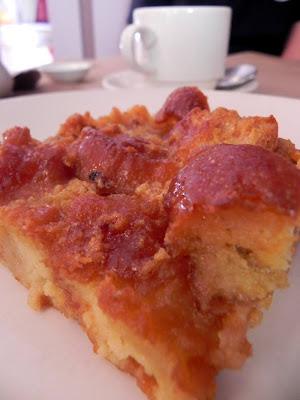 The dining room was packed, with more people waiting at the door, but our dishes kept coming out in a very timely fashion. Before we knew it, our server was swooping in to pick up our empty plates and bringing us new ones. For his entree, John selected the Pulled Pork Cake with Potato Confit and topped off with a bright, Purple Cabbage Cole Slaw. Like any of the “BBQ” items at Boucherie, this was wonderfully juicy pile of smoky pulled pork that practically melted in your mouth with each bite. Strangely enough, I chose something similar, the Cuban Sandwich. Thick, saucy hunks of roasted pork dressed with red wine mustard, pickled roasted poblano peppers, ancho aioli and house made, fresh mozzarella were pressed between two, cripsy slices of buttered and toasted bread. The cheese was slowly oozing out of the sides and as one man passed by my table, he pointed and said “I’m getting that next time!”

At last, it was time for dessert and since John had never tasted it before, we chose the Thai Chili Chocolate Chess Pie. I guess our server was getting a bit frazzled by the crowds though, because what came to our table was their Krispy Kreme Bread Pudding. Laughing, I informed her of the mistake and she said, “No worries, I’ll bring you a slice of that too…” Needless to say, we ate the bread pudding, which is sinfully decadent, moist and lighter in texture than you’d imagine, and then took the chocolate pie home. Later that night we devoured that chocolaty, spicy sweetness resting in a buttery, flaky crust and it was just as fabulous as we thought it would be. 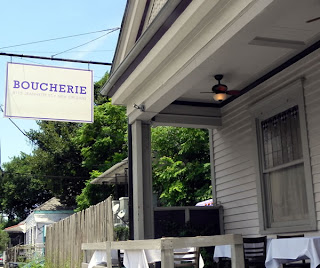 Not to start any inter-city rivalry, but I think I live in one of the best neighborhoods in New Orleans, especially when it comes to food.  It’s only four blocks to Spoon Bread at Dante’s Kitchen, three to a pork tenderloin & Gouda cheese Canoe at Barcelona Tapas Cafe or the best burgers in town at GB’s Grill and only two blocks to a Rainbow Roll at Ninja.  While doing laundry on Maple Street (only six blocks away), I can devour some fried Kibby at Babylon Cafe or indulge in a strawberry turnover at Maple Street Patisserie. The close proximity of so much incredible food is dizzying and I have only skimmed the surface.

Just the other day I visited yet another exceptional restaurant in my ‘hood that I’ve been anxious to visit for some time.  Ever since tasting fried boudin balls from the bright purple Que Crawl truck parked out in front of Tipitina’s almost a year ago, I’ve been dreaming about visiting Boucherie.  This is my 43rd cheat and I am down 61 pounds. 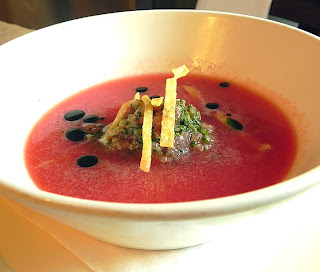 You’ll find Boucherie on Jeanette Street (only five blocks away) in the old Iris location.  John and I arrived on the steps of the quaint, unassuming house featuring a black stencil of a pig at about 15 minutes to noon.  There were only two other tables taken when we arrived, but the small restaurant quickly filled while we dined.

Since we couldn’t decide between two drool-inducing appetizers, we got both; Watermelon & Creole Tomato Gazpacho with Kafir Lime Tuna Ceviche plus the Blackened Shrimp & Grit Cake with warm house made bacon vinaigrette.  The chilled gazpacho was deliciously refreshing, especially with the tangy ceviche center.  I loved the presentation featuring small drops of balsamic vinegar making the whole dish look like a slice of fresh watermelon. 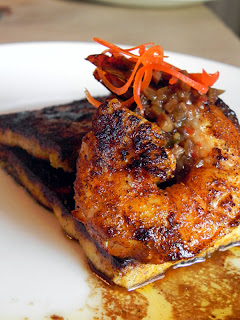 As wonderful as the gazpacho was, I couldn’t help but be deterred by the rich, heavy aroma of the Blackened Shrimp that was served at the same time.  The shrimp and grit cakes were fantastic, spicy and crisp…John and I made sure we split the third shrimp evenly in half as neither one of us wanted less than our fair share.  Conspiracy theory or no, I believe restaurants purposely serve their juiciest tidbits in threes, certain that the uneven number might entice a call for another order.  I was almost bamboozled by their shifty devices, but then I saw my entree.

Roast beef po’boys, when executed well, are a beautiful thing.  The beef should be tender and juicy, drowning in a rich brown gravy, that soaks into the soft, white belly of the French bread. There should be lots of finger-licking and napkin-using and small, leftover puddles of gravy on your plate. My 12 Hour Roast Beef Po’boy did all that and more.  The pickled red onions and spicy horseradish cream contrasted perfectly with the rich, heady beef that practically melted in my mouth.  I think I’ve found my new favorite… 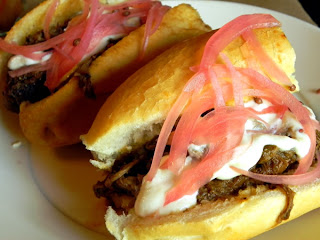 John’s entree was equally wonderful, a Smoked Wagyu Beef Brisket.  Apparently, Wagyu beef from Australia is supposed to be among the most tender and tasty in the world and after a bite of John’s brisket, I can easily see why.  The meat was tender and juicy, falling apart at the touch of a fork and slathered in a sweet house made BBQ sauce.  I managed to snag some tasty garlicky Parmesan fries from his plate too.

After such a decadent meal, we really should have been finished, but not without dessert! I wasn’t leaving until I tried the house made Fudge Farms Bacon Brownie.  Could you? 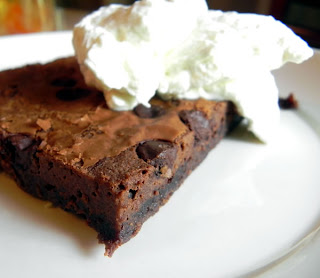 The brownie arrived shortly after we ordered it, warmed through with a couple large dollops of freshly whipped cream speckled with vanilla bean. The rich chocolate flavor burst into my mouth in my first chewy bite with a distinct aftertaste of smoky bacon.  Although I enjoyed the whipped cream, I would have loved a scoop of their homemade ice cream on top instead.

When at last we received our check, I was completely stunned! After all that food, our tab only came to $54 before tip. On their website, Boucherie describes their passion/mission of bringing “fine dining to the people.”  I’d say they succeeded wonderfully!

I know there are other neighborhoods in New Orleans that have awesome restaurants to choose from just like in the Riverbend, but I couldn’t be happier knowing that Boucherie is in mine.