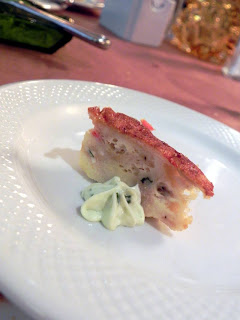 Since most of my family lives over 2000 miles away in California, I decided last year to begin my own Thanksgiving tradition. Instead of making a ton of food, a large portion of which would become leftovers that I wouldn’t be able to eat because of my diet, I chose to dine out.

Last year, John and I enjoyed our Thanksgiving at Muriel’s Jackson Square and had a fabulous dinner on top of a beautiful day spent in an unusually quiet French Quarter. This year, we invited another couple and their darling daughter to join us for dinner at Café Adelaide. This is my 62nd cheat and I am down 76 pounds, having lost one of the pounds I gained last week.

John and I appeared for our 4 p.m. reservations to find Dani, Saeed and Posie patiently awaiting our arrival in the lobby of the Loews New Orleans Hotel, which is where Café Adelaide and the Swizzle Stick Bar are housed. We were escorted to our table in their comfortable dining room whose decor (intentionally) echoed the elegance of the 1950’s. 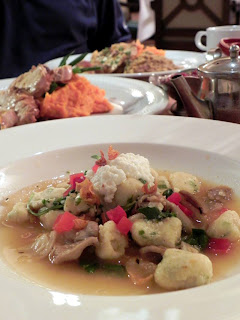 Not long after we placed our order, we were pleasantly surprised by a delightful amuse-bouche, a Creole Tomato Bread Pudding with a tiny dollop of herbed butter. It was a tasty insight into the unique dishes created by Chef Chris Lusk, a kitchen magician who braves unusual flavor/texture combinations that I was anxious to experience.

Before long, our appetizers arrived accompanied by warm, fresh French bread. Though it might seem difficult, all five of us managed to share two very different dishes; Hudson Valley Foie Gras Grillades & Grits and Blue Crab Pound Cake. The “pound cake” turned out to be a dense, sweet cornbread draped in a Port-Salut cheese “icing” with truffled crab claws on top. It was delectable and rich with the flavor of crab. My only complaint would be the quantity…I wanted more!

Posie, our 11-month-old dining companion was delighted by the foie gras and considering my general dislike of liver, so was I! The meat simply melted in my mouth and meshed well with the creamy grits doused in a port wine sauce. That little girl is eating far better than I was at her age. Posie’s mother Dani informed me that it was my responsibility to see that Posie learned how to eat well.  Mission accepted! 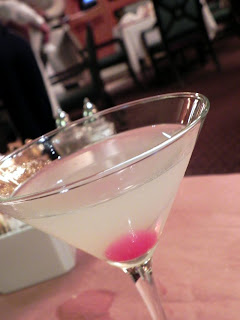 We wouldn’t let our servers take the plates away till they were completely cleaned, much to their amusement. In the interim, John and I decided to order a couple of cocktails, both of which were created by one of Swizzle Stick’s most talented bartenders, Shawn Phipps. What’s Thanksgiving without a little libation after all? I chose a “Santeria” with Stoli Vanil Vodka, Nocello (walnut liqueur), Licor 43 (a Spanish citrus liqueur), allspice and a cinnamon-sugared rim. It smelled like Christmas and tasted even better. John’s “Cary Grant” was definitely more of a man’s drink featuring Knob Creek bourbon, vanilla, cognac and orange bitters.

We had just begun sipping when our entrées arrived, served all at once by three different servers. I love this kind of extra-special care when dining, to me it’s one of many signs the restaurant really does have your best interests at heart and good service (along with fabulous cuisine) is a top priority. 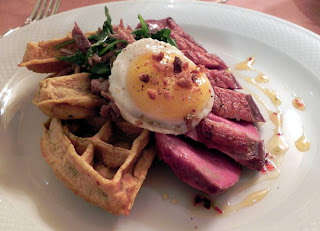 Posie and her dad Saeed stayed traditional with a plate of Herb Roasted Ashley Farms Turkey served with shrimp & mirliton dressing, P&J oyster dressing, rye whiskey-Steen’s syrup sweet potatoes and giblet gravy. Posie offered me a taste of her turkey and it was juicy and delicious, just like she said it was…well, not in so many words, but I knew what she meant.

Dani’s Creole Cream Cheese Gnudis were fluffy and cheesy with wild mushrooms and a light, grilled tomato consommé, a delightful dish even though I had expected her to order something a bit heavier. John’s Pecan Smoked Redfish-Soybean Cassoulet was “off the hook” with a house-made andouille encased shrimp that he was reluctant to share, but strangely enough, I thought the white beans stole the show. 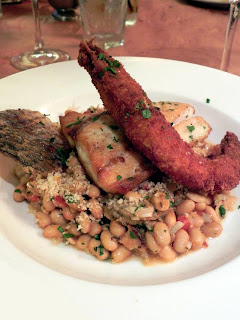 Although I was intending to get off my duck “kick”, I simply couldn’t resist the Muscovy Duck & Pumpkin Waffles. Thick slices of moist duck breast rested atop two savory pumpkin waffles and a sunny-side up egg sat quivering on top until I broke it with my fork and let the heady yolk cover everything. It was a fantastic dish in both flavor and creativity and I couldn’t help but inhale it…most vigorously.

We finished off our meal with two lovely desserts, a “Hot Chocolate” Pound Cake and Praline Pot de Creme. Both were wonderful, but for the first time ever I preferred the thick, creamy custard over the dense, rich chocolate. Hey, it had to happen sooner or later! Posie just happened to agreed wholeheartedly…