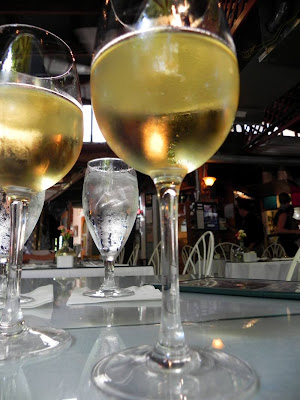 In case you weren’t aware, there is a gorgeous, yet quaint B&B on Esplanade Avenue called the Degas House. Apparently, back in 1872, the famous Impressionist painter Edgar Degas spent almost half a year in this very house visiting his American side of the family. Just a few blocks away lies a sweet little French-inspired restaurant called Café Degas, a spot I have been curious about for quite some time. Maybe it was the change in the weather or maybe it was because I had a hankering for French cuisine — whatever the reason, John and I headed down to Esplanade Ridge to enjoy a leisurely lunch at Café Degas.

If you’ve never been, the restaurant is a small affair with most of the seating located on a covered, outdoor patio surrounded by lush greenery that somewhat screens diners from the busy traffic going by on Esplanade Avenue. You’ll even find a small tree whose trunk grows up in the front of the dining area and right through the wooden roof that only increases the alfresco experience to be had at Café Degas. 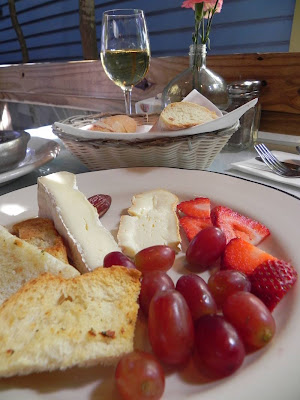 After being seated by our genteel hostess (who sported a strong French accent), we made our choices from the menu over a glass of white wine suggested by our server. I think it was a Pinot Gris that was a bit dry, but very crisp and floral. Luckily, we both thought it worked perfectly with our appetizers that appeared more quickly than we anticipated.

We shared a cheese plate that featured two delicious cheeses, one creamy like a brie and the other very dense. Both were buttery in flavor and we gobbled them down with fresh strawberries, grapes and a fresh, sliced baguette. There was also a lone date on the plate that John and I split in half. I practically grew up on dates, they are a delicacy common in Persian households, but John had never eaten one before.

Have I mentioned how much I appreciate John’s adventurous nature? You’d think someone who grew up with a fairly limited choice of foods would be skeptical of trying something new (like his father), but not John. He will try anything once, even two or three times to give it a fair shot. It was as easy as pie to get him to try our next appetizer, a dish of escargot. Even I was wary the first time eating snails, but John had no difficulty scooping the dark meat into his mouth with a shrug and a smile, saying “It’s just like garlic and butter!” after his first taste. 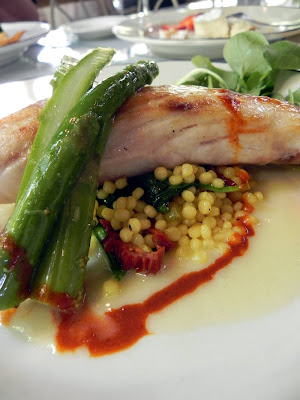 For my entree, I chose “L’Onglet de Boeuf” or a medium rare, juicy seared hanger steak with crispy, garlic pomme frites (french fries) and fresh broccoli in a wonderful garlic bordelaise. The sauce was so good that I swirled the fries and florets until they were quite sodden and gleefully delivered the tasty combination to my mouth via fork. John’s dish, a pan seared lemon fish, was served with saffron pearl couscous, sun dried tomatoes and sauteed asparagus in a pool of brandy shellfish sauce. His filet was rather thick, but he had no difficulty gulping down his entire dish and coming back to polish off mine as well.

There were quite a few choices on the “dessert wipe board,” most featuring cute, spooky names for Halloween, but John and I both settled on the Raspberry Chambord Cake with a nice, hot cup of café au lait. The cake was light and delicious with a thick layer of custard and a thin lining of raspberry between each layer of cake and frosting. I’m sure I could have easily enjoyed my own slice. After enjoying such a lovely lunch at Café Degas, I could easily see returning again for dinner…is next week too soon?