In the 900 block of S. Carrollton Avenue, among some of the finer mansions on the street, sits the Carrollton United Methodist Church. It’s a gorgeous brick and stucco structure with a round, stained glass window hovering above a pillared entryway, and to be perfectly honest, I would have never known it was a church if not for the sign out front. It reminds me of Spanish-style missions that are so very commonplace in California and I wondered, was this originally a house or has it always been a church?

Minimal online research on the history afforded me nothing aside from the fact that the reverend is named Jon Lord who had previously worked at missions in South Africa and the church is open to all believers regardless of age, race, sexual orientation, etc. I also discovered that the church used to house a Tellers-Sommerhof Opus 93 organ , which is (apparently) pretty darn cool. 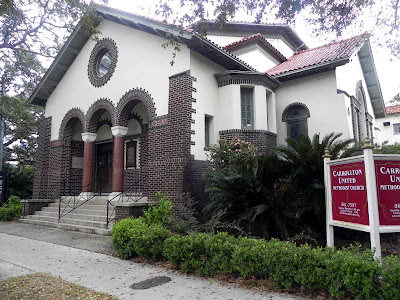