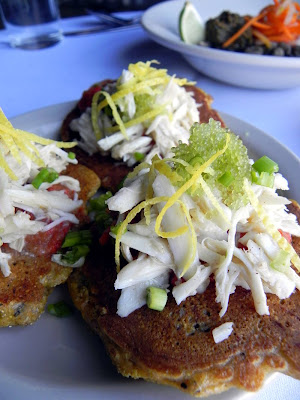 It’s not a case of accidental fortune that I follow Chef Chris DeBarr wherever he may roam. From his days at The Delachaise on St. Charles Avenue to his highly successful venture with Chef Paul Artigues at Green Goddess in the French Quarter, DeBarr has earned my respect and devotion for his delightfully eclectic dishes and willingness to take a chance on something completely different. These qualities remain at his latest restaurant Serendipity, located in the American Can Company building on Orleans Avenue.

Several weeks ago, John and I decided to try Serendipity when they finally opened for lunch. Not only does a lunchtime menu offer us a more affordable option, the light is perfect for picture-taking.

When we walked into the restaurant, there was only one other table filled, so we got to choose where we wanted to sit. We chose a high table near the window and scanned the brand new lunch menu to see what tickled our fancy. While we waited for our food, John and I indulged in a couple of cocktails that were created by the geniuses at Bar Tonique in the French Quarter.  I had the “Serendipity Punch” featuring Quinta Infantado Port, house-made sherbet syrup, fresh lemon juice and Bittermen’s Amere Sauvage. John chose a “Fancy Brandy Cocktail” with Pierre Ferand Cognac, Lucardo Maraschino, strawberry and Angostura Orange Bitters. Both drinks literally danced on our tongues and we didn’t regret the happy little buzz one bit. 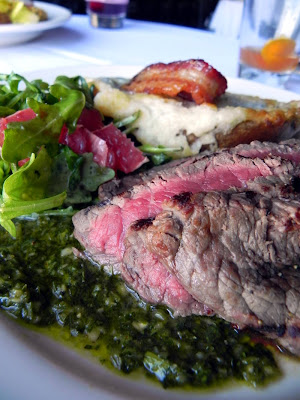 We decided to try two, very different appetizers, the first being 3 Sisters Stew made with black beans, hominy and winter squash that was finished with pumpkin seed and jalapeno molé. I thought it was hearty, warm and filling, but some flavor threw John off and after one bite, he wouldn’t take another. More for me! Our second dish was Crab & Corn Johnnycakes, basically cornmeal “blinis” topped with jumbo lump crab meat, roasted red pepper and eggplant puree and a sprinkling of wasabi caviar. While I enjoyed the flavors, I think the dish could have used a touch more of the puree because the thick cakes tended to make even the crab feel dry.

Before we could even gobble everything down, our entrees arrived. I chose a Bacon-Wrapped Grilled Shrimp & Oyster Salad with Romaine lettuce, radish, cucumber, yellow squash and Remoulade dressing. I inhaled the salad and John had to work fast to get a hunk of the shrimp that was wrapped in a slice of thick, smokey bacon. John chose the Two Run Farm Sirloin Steak with chimichurri sauce and a twice-baked potato and suffice it to say, there were no leftovers. 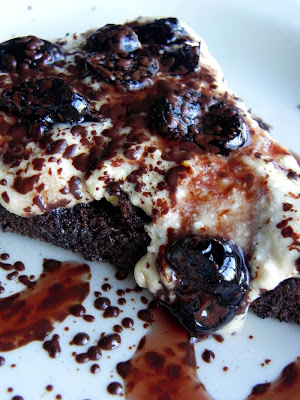 Finally, for dessert we decided to try the Chocolate & Almond Cake ‘Bruschetta.’  The cake was actually grilled (char marks and all) and topped with a honey-whipped ricotta and rich, dark cherries. Although I think it was a brave effort at the first-ever dessert bruschetta I’d ever encountered and the flavors sang well together, I couldn’t help being just a tiny bit thrown by the warm, grainy texture of the ricotta. To each his own! It certainly doesn’t mean I won’t be back to try his Tequila Shrimp Po-Boy or Homage to Hubig’s Pie.