It was love at first sniff for Chiquita and Cosmo, two Applehead Chihuahuas whose owners are none other than local social celebrities Margarita Bergen and Cheryl Lemoine.  It was only natural that the two tie the knot…or the leash, as the case may be, and their nuptial celebration took place on Thursday night at Twist, a chic CBD bar in the Lafayette Hotel.

Twist is a part of Mike’s on the Avenue, a hip, Asian-Cajun fusion type restaurant, but the night was not about food.  The wedding was not only a sweet moment of doggy-I-do’s, it was the culmination of several events benefiting the Southern Animal Foundation. In fact, there were “Top Dog” awards given to the winning celebrity bartenders who raised the most money at their turns behind the bar.  One of the winners happened to be my good friend and local “Food Goddess” Lorin Gaudin…congratulations Lorin! 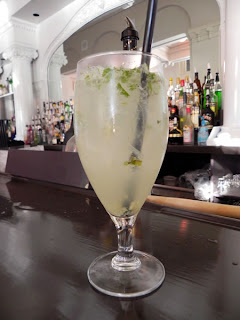 While mingling, taking pictures and shaking paws with some of the most darling dogs in town, I also enjoyed a few of Twist’s signature cocktails and proffered my tips to the “doggy” bank on the bar.  The first cocktail was brand spanking new and called the YLC.  This heady drink featured vodka, rum, gin and tequila with freshly squeezed lemon and lime plus a little simple syrup. Not only was it tasty, $1 of the proceeds benefited who else, but the Young Leadership Council.  Who knew someone as financially challenged as I am could feel so philanthropic in such a short period of time?

The second libation was not so generous, but quite delicious, a little concoction they dub The St. Mojo.  Obviously spinning off of the favorite summertime cocktail, the Mojito, this rendition added St. Germain Elderflower Liqueur (yep, there it is again!) and fresh, muddled ginger along with the usual suspects.

At last, the moment arrived when the four-legged lovers were ready to exchange bow-wows and everyone in the bar huddled around Bonnie Broel, who not only designed Chiquita’s gorgeous gown, but who was also conducting the ceremony. All the guests were capturing the event on cell phone cameras and it was difficult to get a peek, but the canine couple bonded for life without further ado much to the delight of the crowd of friends and supporters.  Raise your glasses high in honor of the happy, hairy couple…may their days together be filled with joy, chew toys and plenty of treats!