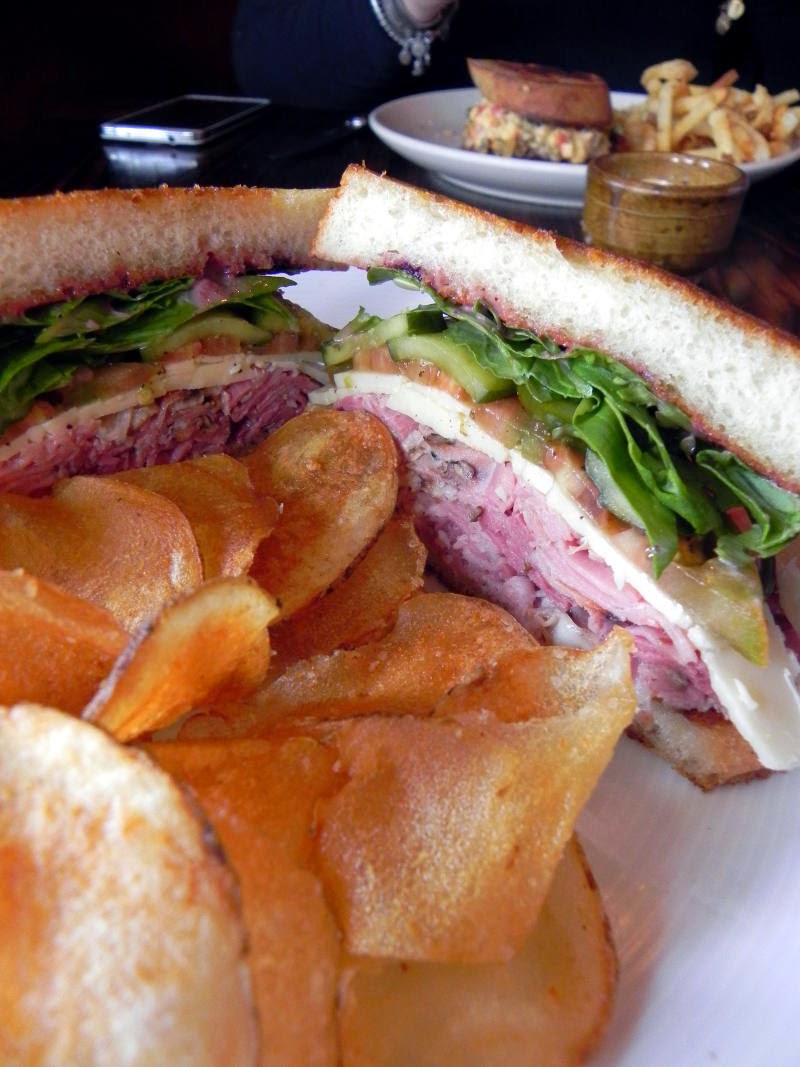 If you didn’t already know, Coquette is easily one of the best restaurants in New Orleans … and in a city where incredible restaurants are a dime a dozen, that’s saying a whole hell of a lot. Like Patois and Boucherie, I try to visit Coquette as often as I can, but the last meal I had was over four months ago with one of my best friends, Lorin Gaudin.

In case you haven’t noticed, I am playing some serious catch-up. I’ve dined at more restaurants than I can write about (or have time to write about) and it’s well past time to get these places all in the hopper. I’m working on it! And yes, I have written about Coquette before, but can a place this stupendous ever get old?

On Lorin’s advice, we started with an appetizer called Buffalo Apples where crisp, green apples were sectioned and deep fried in a tempura batter and then drizzled with hot sauce, blue cheese, celery and walnuts. I’ve probably said this before, but I am not a big fan of Buffalo Wings, but I could eat those apples all day long … and then some. 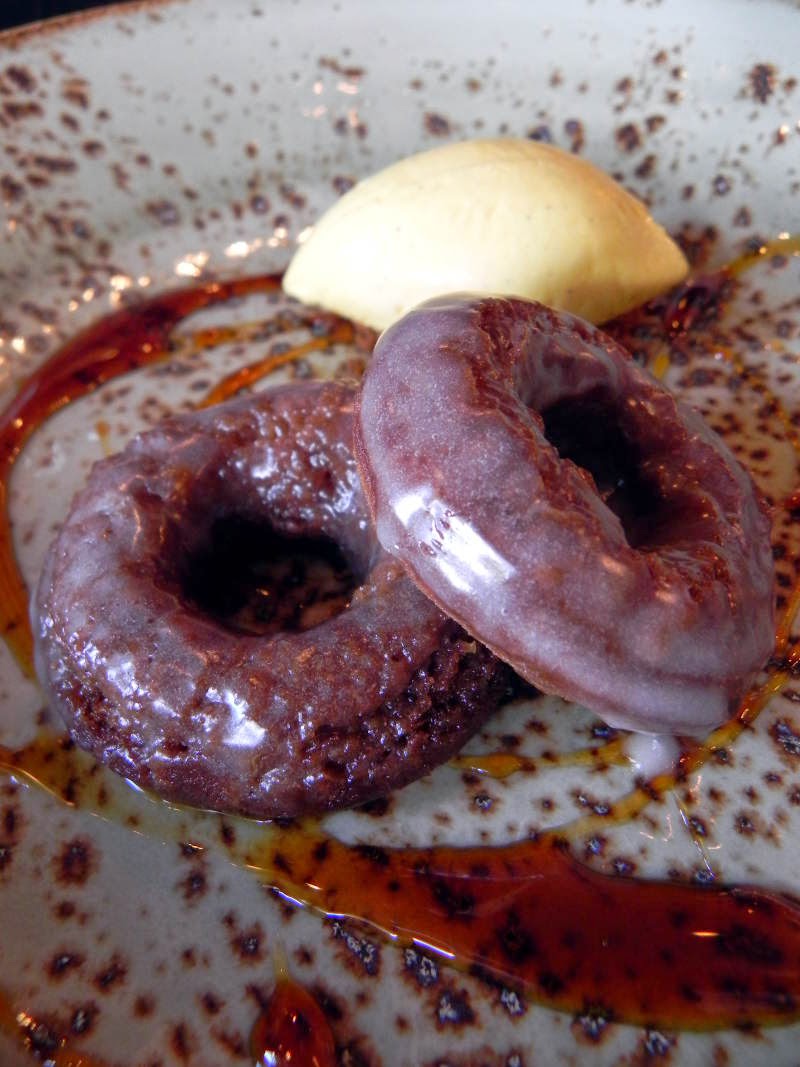 We also shared a bowl of rich, Smoked Pork Gumbo with mustard greens that was garnished with a soft-boiled egg and crispy, fried pig’s ear. Although not traditional, Coquette’s trumped up version had me swooning and to be perfectly honest, one bowl was simply not big enough for the two of us.

For our entrees, we both opted for sandwiches. Lorin chose the Pastrami with apples and braised slaw on house rye served with French fries. I got Ham Sandwich with huckleberry, cheddar and heirloom tomato.  We shared both sandwiches and both were just fantastic what with house-made pastrami and tasso, how could they possibly be otherwise? I also couldn’t stop stealing French fries from Lorin’s plate. Thankfully, she didn’t seem to mind.

Finally, for dessert (oh yes!), we shared a plate of gingerbread donuts with pumpkin ice cream, house made of course. Is there anything this restaurant can’t do? I’ll most assuredly be back soon … 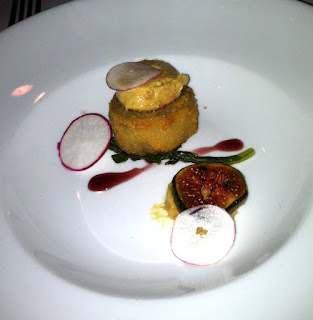 Due to throwing my back out and some feminine issues you definitely don’t want to hear about, I was not able to attend almost all of Tales of the Cocktail this year.  Strangely enough, it was going to be my very first year because I finally scored the media credentials to attend. Typical, right?

All whining aside, I was fortunate enough to spend one fabulous evening “living high on the hog” at my very first Spirited Dinner inside Coquette that was appropriately titled “Swigs & Pigs.” 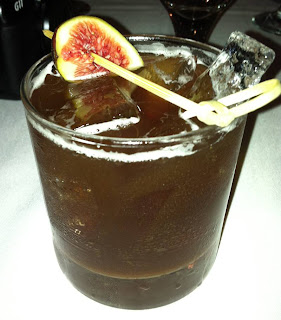 From crispy pig ear to cracklins, I wasn’t much worried about testing my offal limits until I read “pied au cochon” on the menu. I don’t know about you, but pigs feet never appealed to me, especially when the only way I’ve seen them is packed into huge pickling jars…cloven hooves and all. As it turns out, my worries were completely unfounded and turned upside down. Chef Stoltzfus’ interpretation was a decadent, yet delicate fried patty containing all the edible tastiness on a pig’s foot, minus the hoof. Plus, to make you swoon a bit more, he served it with creamy medallions of foie gras torchon, pickled radish and a sweet slice of fig. It was easily my favorite course of the evening, although keep in mind, this was still only the best of the best.

As far as cocktails go, the one that delighted me the most was served with a different course. A plump sea scallop, blood sausage and Chanterelle mushrooms in a sweet corn sauce was accompanied by what I could easily dub my new “poison.” Dewar’s 12 Whiskey, Cocchi Vermouth, bitters and sherry vinegar were combined with a simple syrup made with an incredible ale that possibly has the longest name for beer I have ever heard. Created by Evil Twin Brewing in Denmark, Monk Suffers Serious Sugar Rush On Barbados certainly is a mouthful. I would drink this sweet, malty dark ale on it’s own, but the cocktail that Newton created from it, dubbed “Rob Base,” was spectacular.

Maybe Murphy will cut me a break for Tales 2013. 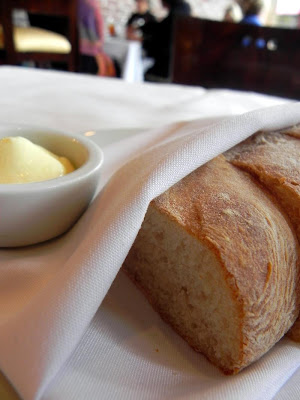 It was just like me not to make reservations, but though the corner restaurant was packed (people were even dining at the bar), it didn’t take more than 15-20 minutes before we scored a table. We ordered quickly after perusing the menu during our wait, and it wasn’t long before our food came flooding out of the kitchen.

First and foremost, I have to talk about the bread. Anytime you go out to dinner, quite often a basket of bread will be brought to the table and though filling, it isn’t always something you remember fondly about the meal. At Coquette, they serve a warm loaf of their own, house-made ciabatta that is so tasty, it will literally knock your socks off. This divine loaf is sliced and served with a sea-salt enhanced, creamy butter that John and I gobbled without reservation or concern about having enough room left over to eat what we had actually ordered. 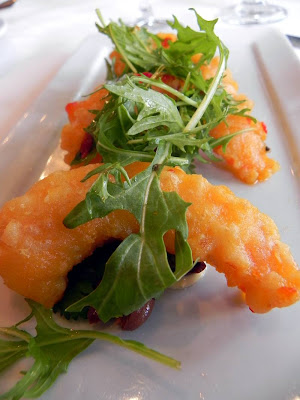 Our appetizers arrived in soon thereafter. John chose the Market Vegetable Salad that was supposed to have included a cashew puree and navel oranges, but they served him the salad from the prix fixe lunch menu which was local greens, candied pecans, goat cheese and Dijon vinaigrette. We didn’t actually realize their mistake until John had already scarfed down more than half of the salad. We chalked it up to a happy accident since John really enjoyed what he got anyhow.

I selected the Tempura Shrimp with a garnish of sambal (chili sauce), grapefruit, nicoise olives and cilantro. The large pieces of shrimp were fried perfectly with a crispy, tasty batter. Both of us commented on the odd combination of grapefruit slices and pitted olives, but I thought it was a nice shock of contrasting flavors.

For his entree, John picked the Steak Frites, sliced pieces of rare hangar steak piled high with French fries and drizzled with a shallot vinaigrette (for the steak) and malt aioli (for the fries). His dish was so tasty that I continuously poked my fork into his plate stealing flavor-drenched fries and, on occasion, a nice hunk of steak. But, in all fairness, John was doing the same thing to me. 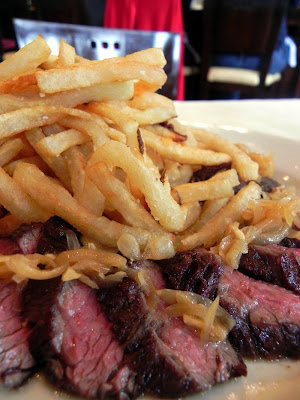 I ordered the Cochon de Lait, which is slow-roasted suckling pig that has been injected with Cajun seasonings and butter. The dish I had was also served with sauteed Brussels sprouts, pureed sweet potato and topped with apple marmalade. Though the meat was a tad dry, the whole dish sang when each bite was carefully composed of everything on the plate and I devoured it in no time.

Finally, we had what was likely one of the most unusual desserts I have ever eaten, Butterscotch Pudding with broken snicker doodles, bourbon and bacon ice cream. I am a huge sucker for anything Butterscotch, so it was not difficult to make my choice, but I have to admit that the bacon ice cream really struck me as being particularly delicious. Rich with a smoky flavor, it is an ice cream that, though delicious, I would not be able to eat in large quantities. Only one thing would deter me from ordering it again and that was the foam garnish on top. Maybe I will never be one to appreciate the latest fads in haute cuisine, but I will never understand foam. It recalls to mind the wickedness of my youth when salting snails in my backyard could keep me entertained for hours on end. C’est la vie!