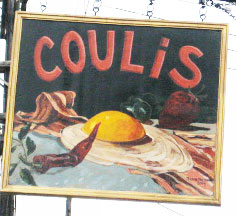 I don’t think there is anything more comforting, delicious and satisfying than breakfast. I’m not talking about a bowl of cereal or a simple bagel. I mean a full-fledged breakfast that would include items like eggs (every way), sausage, bacon, pancakes, waffles, hash browns, omelets, grits, country potatoes, French toast, fresh fruits, cheeses, juices and gallons of steaming, hot coffee. I’m sure there are lots of other goodies to add to that list, but you get the general idea.

Unfortunately, because of the way I have scheduled my cheats, I have not had the opportunity to enjoy a full breakfast meal in all its glory. I have also been seriously irritating my co-workers and boyfriend lately due to my audible (and incessant) breakfast sausage daydreams. In order to satisfy my craving, relieve my friends and finally sample Chef James Leeming’s cuisine, for this week’s cheat I chose to have breakfast for lunch at Coulis. This is my 19th cheat and I am down 49 pounds. 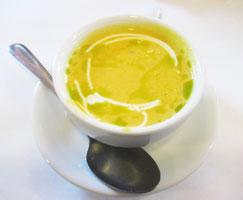 Coulis (3625 Prytania Street) is housed in what once was the Bluebird Café. I had always meant to try out the Bluebird, but never got around to it. I hope I didn’t miss too much, but that train has passed. Coulis is a cute little establishment, cozy and casual with pumpkin-orange walls and various décor featuring photographs of streetcars, paintings of the Three Little Pigs and more. At a signal from a friendly waitress, we seated ourselves and began browsing the menu.

I quickly decided to order one of my favorites, Eggs Benedict, and a side of sausage patties and a croissant. John and Anne (my faithful dining companions) were drawn to the specials chalkboard on the wall behind me and chose to mix it up a bit. Anne ordered a cup of Pumpkin Ginger soup, the Huevos Rancheros and a side of sausage. 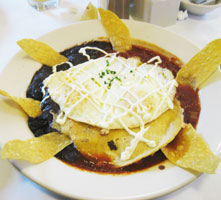 The chalkboard items also seduced John, but he selected a cup of the Shrimp & Chorizo Gumbo, a Grilled Bagel with Norwegian Smoked Salmon and a side of bacon. I think the waitress thought we were overdoing it from the skeptical look she gave us, but I forgive her. She didn’t realize we have huge appetites!

The soups arrived almost immediately and I had my spoon in hand so I could grab a taste! John’s gumbo was dark, rich and spicy, and simply loaded with shrimp and chorizo. Anne’s Pumpkin Ginger soup was drizzled with crème fraiche that cooled the spiciness of the ginger just enough so you could also taste the smattering of chive oil to balance the sweetness of the pumpkin. 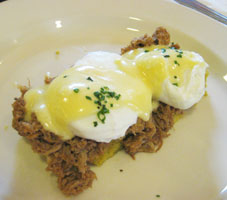 Before the soup cups could be whisked away, our plates arrived. Two perfectly poached eggs were balanced atop a thick, jalapeno corn cake and pulled pork debris and covered with Hollandaise sauce. I loved the flavor of the jalapeno corn cake combined with the pork debris, my only complaint was that there wasn’t quite enough sauce for me…the Hollandaise was so delicious and perfectly made, why not bring it on? The side order of patties was perfect and completely sated my craving for sausage…for now, and the flaky, buttery croissant melted in my mouth.

Anne and John both graciously allowed me to taste their plates. I might be odd, but I love sharing food at the table. It reminds me of family and home. I had been tempted to order Anne’s Huevos Rancheros and was delighted to find it was as tasty as I had hoped. Two over easy eggs were served on black beans, Creole sauce, corn tortillas, pepper jack cheese and sour cream. I enjoyed the Creole flavors combined in this classic Mexican breakfast and wasn’t surprised a bit at how well they worked together. 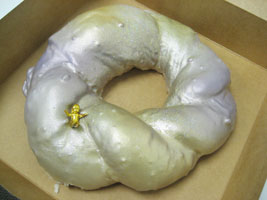 John’s dish was fresh and flavorful. — a grilled bagel with Norwegian smoked salmon, cream cheese, red onions, tomato, avocado, capers and a beet garnish. The flavor recalled to me an awesome little bagel shop I used to visit in California who served delicious shmears and fresh vegetables on huge bagels that I craved on a regular basis.

After sighing contentedly and finishing the last scraps on our plates, Anne reminded me that we didn’t have any dessert. She put forth a brilliant plan, so fitting for the season, of picking up our first king cake of the year at Sucré. When we arrived at the pastel candy shop, it seemed that a lot of people had the same idea we did, but because of the excellent service, we picked up a king cake and were out the door in less than 5 minutes.

When we got back to the office, we greedily snatched slices of the brilliantly glittered pastry and enjoyed a truly incredible treat. I’m at a loss to decide between Cake Café & Bakery and Sucré when it comes to who has the better king cake. They both are fantastic!

Although I was stuffed, I couldn’t help thinking about where I wanted to go eat next week. Does anyone have any suggestions? If not, I am sure to discover another incredible cheat!