Regardless of my work schedule or what I do on the weekend, I always need an extra, afternoon dose of coffee on Mondays. If I could magic myself there in an instant, today I would choose this gorgeous cappuccino I slurped down several months ago at Domenica… 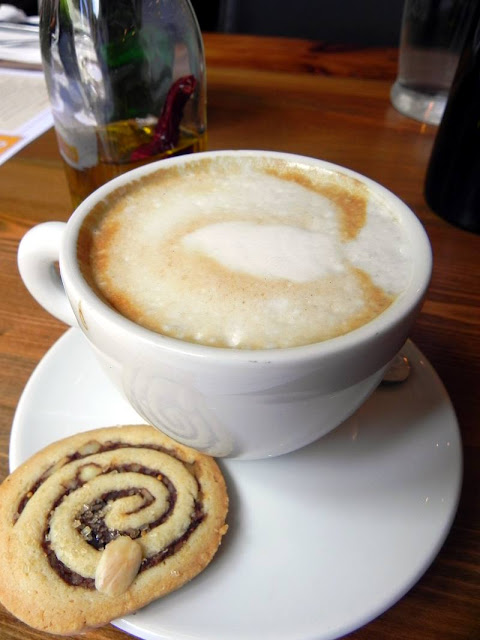 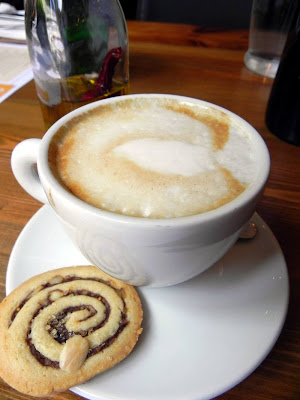 Besh, Besh, Besh, Besh, Besh … and more Besh. Everyone wants to talk about John Besh. His restaurants are all over town and so is his face. You see his boyish, mischievous grin plastered on every available advertising venue (though I haven’t seen him at a bus stop yet) and every publication in the Greater New Orleans Area, not to mention his recent launch of a national cooking show airing for the first time this Saturday on WYES.

The fact that his persona has saturated the market is the sole reason I haven’t done a cheat at any of the Besh restaurants. I mean, the last thing this big, super chef needs right now is a review from a small blogger like myself, right? My purpose in writing down my cheats was not only to record my weight loss (and gain) in the hopes that sharing my embarrassment would goad me to keep losing, but to reveal to all and sundry that there’s a plethora of restaurant gems out there in this great city of ours… restaurants and chefs that don’t have their own television show.

For example, yesterday on the streetcar I met a couple of tourists who were talking about the dinner they had the night before and pondering where their next food adventure might be. They were rattling off names we’ve all heard before like Arnaud’s Mr. B’s and Restaurant August.  But I’m sitting there thinking, it’s almost 6 PM, they on their way to the Riverbend, so I opened my big ol’ mouth, butted in on their conversation and recommended Boucherie. 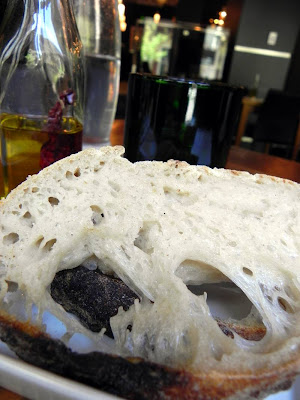 They had never heard of it before and kept asking me to repeat the name and talk about the menu. I spelled it out as they typed in into their iPhones – a light of discovery shining in their eyes. I would be surprised if they didn’t go.

My tediously long point is that Mr. Besh has enough attention…

So why did I go to Domenica for my 79th cheat (still only down 79 pounds)? I guess my curiosity finally got the better of me and I thought it was time to see what the “Besh Experience” was all about.

We arrived at Domenica, located in The Roosevelt at 123 Baronne Street, late in the lunch hour at almost 2PM. There were hardly any other diners in the humongous restaurant whose decor reminded me of an art gallery with dark walls, tons of track lighting and tall, sheer curtains reaching up to a cavernous ceiling. We were seated immediately and greeted by our most gracious waitress who proffered “help” with menu seeing as John and I are complete rubes. 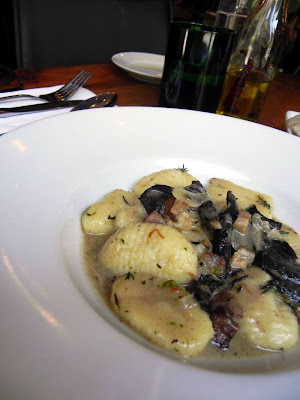 We did our best to simply focus on the food that quickly flowed out of the kitchen shortly after we placed our order. I started with the Gulf Tuna Crudo. Bright squares of fresh, raw tuna were dressed with lemon, olive oil, thinly sliced jalapeno and radish, plus a sprinkling of hazelnuts. It was so light and refreshing, I think John was a little jealous, but you know I shared.

His small plate choice was the Gnocchi in a creamy, buttery sauce with wild mushrooms and thick pieces of smoked pancetta. We both loved the sauce and scooped up the remnants with torn pieces of ciabatta, but the gnocchi themselves were a little heavy and doughy.

Though we were ready for the next course, unfortunately my camera was not and the battery promptly died after a few shots of the tuna. C’est la vie!

I couldn’t help eying John’s dish as it came out, even more so than my own. He ordered the Paneed Louisiana Grassfed Veal at my urging – beautifully thin layers of tender veal, pan fried and accented with just a little lemon and arugula. I ordered the Porchetta Panino with provolone, rapini (a kind of broccoli) and garlic mayonnaise. The sandwich was served with house made Parmesan potato chips that were amazingly thin and crispy. 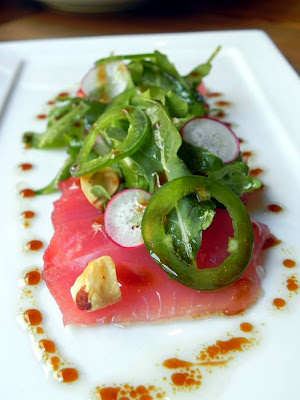 With plenty of room for dessert, we agreed upon the “Banana Zuppa Inglese,” since I am a sucker for anything banana and John just likes to make me happy. This Italian version of trifle was served in a chilled, sealed glass canister and opened at our table. After the first bite, I knew I could eat at least two of these all to myself, John could get his own! It was a thick layer of a moist custardy, banana-rich cake topped with butterscotch mouse and broken shards of peanut brittle. John enjoyed it just as much as I did and we fought for the last spoonful, scraping the sides of the jar for any lingering morsels we might have missed.

Despite small portions (we actually were able to eat a few hours later) and steep prices ($90 for lunch!?!), I really enjoyed the food. That is what it comes down to, after all…was the food good? You’re damned skippy!