Last week, I drove too far past Cafe Degas on Esplanade and had to find a place to turn around. Things can get kind of hinky street-wise around the bayou, so I hurriedly took a right on Verna Street, made the block and came back around on Leda.  I suddenly slowed my car to a crawl. Rising up on the left-hand side of the street was the most peculiar mansion, one whose architecture stood out drastically from the shotguns and craftsman-style homes that had obviously been built up around it.

Pulling over, I grabbed my camera and got out of the car. As I neared the large, wrought-iron fence surrounding the house, I spotted an ornate iron sign naming the structure as the Luling Mansion. 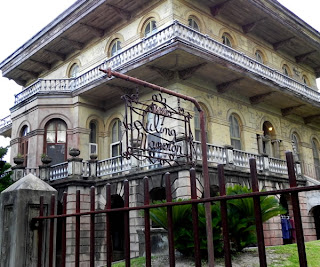 There was one particular feature of the house that had me confused…it had a back. It’s this grand mansion with balconies, balustrades and tall arched windows but only on three sides!  Was the rear of the mansion facing some kind of wall?  A line of trees perhaps?  It just looks so bizarre because when you approach the building by car, the first part you see of it is the back, this large flat, stone wall with a small wrought iron balcony on the second floor with stairs leading to the ground.  Perhaps I’m showing my ignorance (it certainly wouldn’t be the first time), but is this a common feature of Italianate architecture? 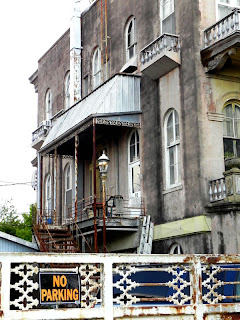 Regardless of this oddity, I still think the mansion is stunning and perhaps just a wee bit creepy, which totally works for me.  After all, Florence Luling spent a small fortune in 1865 (approximately $25,000) hiring the top architectural firm Gallier & Esterbrook to design and build his family home only to lose his two sons shortly after the house was finished.  His boys drowned in the nearby Bayou St. John.

One historian waxed romantic, calling the mansion “one of the most beautiful places in the country.”  He praised the grounds, vistas and landscape…not to mention the lavish parties held by the Louisiana Jockey Club featuring hundreds of Chinese lanterns.  I could imagine how grand this house was in its heyday with grounds fronting Esplanade Avenue and two smaller buildings adjacent to the main house.

In the Bay Area there is a house called The Carolands that reminds me of the Luling Mansion, creepy history and all.  Only to get to it, you have to navigate narrow winding roads through the hills.  I can’t tell you how many times I got lost just trying to find it.

Maybe here in New Orleans, getting lost is the key. 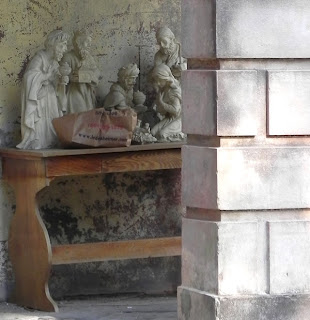