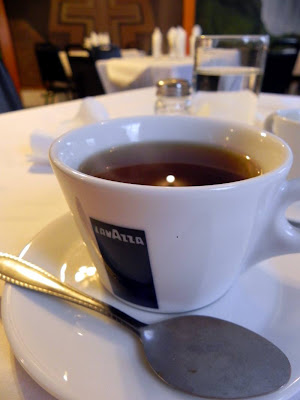 Unusual ethnic cuisines aside, dining in a new restaurant every week is always an adventure. Even if you are just going out for burgers, you never can be sure what kind of experience you may encounter. This week, in an effort to try something completely different, John and I decided to dine at the only Ethiopian restaurant in town, Café Abyssinia. This is my 72nd cheat and I am down 80 pounds.

Located Uptown on Magazine Street between Foucher and Aline, you could easily pass Café Abyssinia by if it were not for the huge sign out in front. “Unassuming” might be an understatement at this small cafe where the walls are decorated in hand-painted, simplistic murals and the water glasses feature your mama’s square paper napkins, but it’s all about the food, right?

We were both curious about the beverages, so John opted for the Ethiopian tea, while I tried the coffee. The tea, as it turns out, is simply a black tea spiced with such earthiness as cloves, cardamom, rose hips and cinnamon and was quite delicious. I was hoping for something similar to Turkish coffee heavy with grounds, my coffee was just that…coffee, though brewed quite strong and served in a tiny cup. 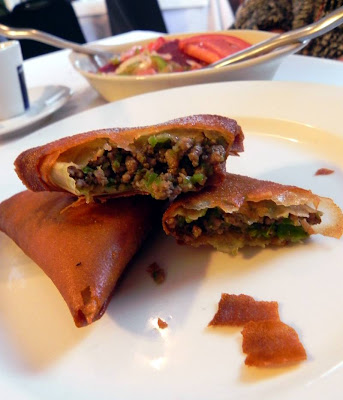 It was when our server (an obvious student with a Tulane tee showing through his billowy white tunic/uniform) finally started bringing out the food, that I started to get excited. First, we shared a beet salad with fresh sliced tomatoes, onions, green peppers and (of course) cooked beets with a dressing of olive oil and lemon juice that was a light, refreshing start.

When the minced meat Sambussa arrived, they looked much liked I expected, deep fried, triangle-shaped packages of a thin dough (like phyllo) filled with spiced meat and vegetables, but the flavor was a different story. The finely chopped, green vegetables mingling with the beef turned out to be raw peppers that, at first, were completely innocuous, but gradually built our mouth up to a boil.  Though they were quite delicious, the heat had both John and I sniffling and tearing up in no time!

The food surprised us once again when our entrees arrived, served all together on one huge, silver platter with no silverware in sight. Three, neat pools of food and one ramekin of meaty lamb bones swimming in a thin, aromatic sauce were served directly on top of a huge piece of flat bread called injera, that looked suspiciously like a large, wheat pancake and had a similar, fluffy texture. The server plopped down a basket filled with more of the injera alongside the huge platter as he pointed out and described each “pile.” 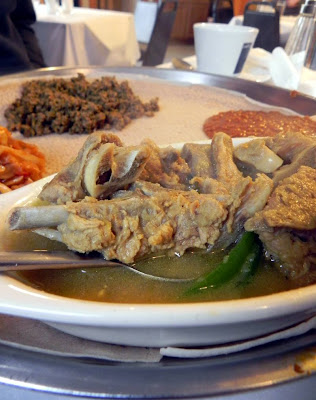 One of the piles was my order, Kifto Begomen or finely ground beef seasoned with butter, chili pepper and other earthy spices like cinnamon and cardamom. It was supposed to be mixed with collard greens, but I think my server forgot and I ignored the lack until we had already eaten more than half. The other two mounds were Tikel Gomen (cabbage and carrots in a mild curry) and Yemisr Wot (red lentils and onions in a spicy, house-made sauce). The bone-in lamb chunks resting in the ramekin (Yebeg Alicha) were simmering in a mild curry, ginger and garlic sauce.

Thankful that we had recently washed our hands, John and I only hesitated a moment before ripping off a piece of bread and scooping up whatever was nearest. It was wonderful! Not only was the food warming, spicy and just delicious, we couldn’t help having fun eating everything with our hands. We grinned mischievously at each other while gnawing the tender, headily spiced lamb from the bones and sucking the delectable juices from our fingertips. How many restaurants do you know of in New Orleans where it’s expected to eat stews with your fingers? One! Café Abyssinia…