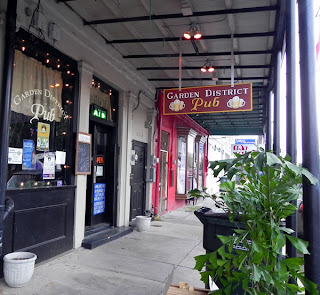 In the 1900 block of Magazine Street lies a quaint, unpretentious neighborhood bar called the Garden District Pub.  Although I have visited quite a few little-known and under-appreciated watering holes in this town (The Saint and the pre-flood Hi-Ho Lounge comes to mind), this was one of those precious local gems I was never introduced to.  I walked into the small, but very comfortable bar the other afternoon during happy hour and reveled in the laid-back atmosphere along with only a few other patrons who were loading up the digital jukebox with an excellent choice of music (three songs for a buck!).

When I asked my usual “signature cocktail” question of Mallory, the bartender on duty, she smiled and said her favorite preparation was a “shot of Jameson and a bottle of PBR.” Laughing yet determined to drag a mixed drink out of her, she finally offered a popular classic New Orleans cocktail, an Old Fashioned. It was a bit heavy on the Bourbon, but I still enjoyed it all the way down to the macerated cherries at the bottom of the glass. 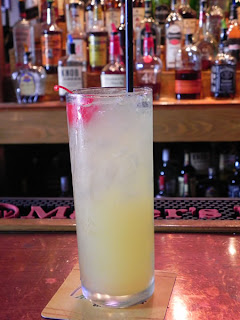 Thinking about another drink before I even finished the first, Mallory must have read my mind because she asked what I wanted next.  Since I was undecided, she finally opened up to me…”There is a drink I made up with a drunken customer one night, want to try it?”  I immediately said yes, willing to brave whatever strange concoction she put in front of me.  Hilariously dubbed the “Sophie B. Yeah You Right”, this inebriated invention called for Vodka, Gin, Malibu Rum and pineapple juice and was surprisingly tasty.  It reminded me of a Hurricane where you combine all kinds of booze and successfully cover the burn with the sweet-tart flavor of pineapple.  I still enjoyed it, even more so that I wasn’t on Bourbon Street. 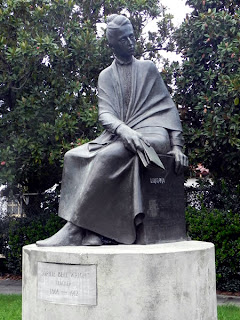 While gaining a respectable buzz, I asked Mallory about the small park across the street with the statue of Sophie B. Wright.  Apparently, out of respect to Miss Wright and for her own personal amusement, Mallory had been telling tourists that it was a local “tradition” to offer libations and notes of appreciation to Sophie’s statue.  This convention took hold so strongly, that on a daily basis she would see chalk-written praises, flowers and even gifts laid at the famous educator’s feet.  Mallory expressed her irritation at seeing bums, trash and dog poop littering Miss Wright’s memorial and it was about time folks paid some respect to this remarkable female role model.  Regardless of her methods, I heartily agreed.

If ever you find yourself turned around at the triangle or roaming Magazine after a meal at Jackson or Juan’s Flying Burrito, stop into the Garden District Pub for an excellent happy hour (my two cocktails totaled $8!), enjoy the amenable atmosphere and employees and select a few songs on the jukebox. Also, it certainly wouldn’t hurt if you offered a gift to Miss Wright on your way out.