A while back, I posted a picture that was supposed to contain a giraffe and I get the feeling y’all might think I was pulling your collective legs….either that or I simply needed to be committed.

This afternoon the fates were on my side because not only did my friend appear at the end of Tchoupitoulas Street (like he does most of the time), but I also had my camera with me. So, without further ado, here is Mr. (or possibly Mrs.) Giraffe that greets me almost every afternoon. Digital proof my sanity is intact! 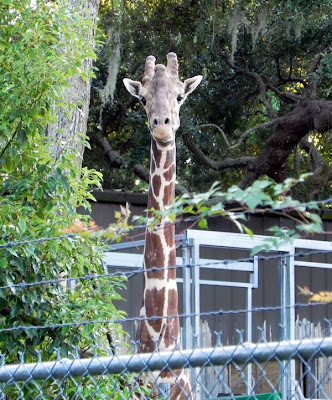 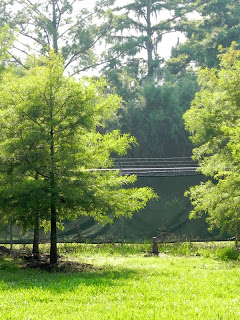 Whether it be due to divergent cultural influences, the sticky swamp air or too much cayenne pepper, you can expect the unexpected when you live in New Orleans.  I’ve had some of the most intense, most vividly colorful experiences of my entire life in this city, from getting hit on by a transvestite in fishnets and a bustier to being stuck at a traffic light for over an hour while an unscheduled (or at least unexpected) Mardi Gras Indian parade rolled by.  Once, I followed a black and yellow butterfly as big as my face on a walk through the Garden District only to see it alight on a bright, tropical flower nearly three times its size.  I’ve been caught in random rain storms that soak to the skin in seconds, tongue-kissed by an over-enthusiastic girlfriend during Krewe du Vieux and I’ve even been arrested for disturbing the peace during Lundi Gras.

At last, I finally realized that the surreal and unusual are exactly what to expect when living in New Orleans, a city where the extraordinary becomes commonplace and, strangely enough, quite normal.

For example, almost every day after dropping my boyfriend off at work, I drive back Uptown on Tchoupitoulas Street and I follow it all the way until it bottoms out at Audubon Zoo.  Almost every time I take this route, I inevitably spot a giraffe hanging out really close to the fence.  Naturally, the first time I remember to bring my camera along, the giraffe isn’t there.

Anyhow, that’s a picture of where he (or she) usually shows up.  Maybe next time…