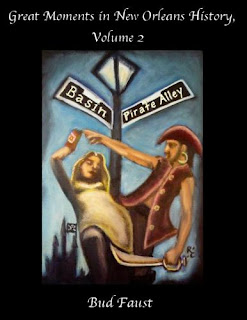 As if the first collection of hilarious historic New Orleans events was not enough, local playwright Bud Faust has done it again with Great Moments in New Orleans History, Volume II. If you’ve ever read The New Orleans Levee, you’ll be familiar with Faust’s unusually hilarious glimpses into local history each month, if not…well, you need to go pick one up.

Like last time, I chuckled, snickered and even guffawed my way through the book, much to my boyfriend’s annoyance (I often read in bed while he’s sleeping). It was hard not to laugh out loud while reading “On the Waterfront” where 1970’s Mayor Morial tries desperately to sell Oglethorpe on riverfront development or “The End of an Error” chronicling the close of the failed 1984 Louisiana World’s Fair, an article that was “stolen from the archives of the New Orleans States-Item, which are located in the second-floor men’s room of The Times Picayune.”

I especially enjoyed the letter from Irvin Pluck written to the secretary at the Vatican in preparation for Pope John Paul II’s visit to New Orleans in September of 1987. In his outline, Pluck asks if “His Holiness [would] be willing to throw ‘communion wafers’ doubloons during his parade through the French Quarter”, if he knows how to Second Line or if he would be amendable to distributing shrimp po-boys during communion…”Pre-blessed, of course.”

You can get your copy of Great Moments in New Orleans History, Volume II at local bookshops all over town, but if you want to see the man himself, you can catch him this Saturday! From 12:30 to 2:30 p.m. at the Jefferson Parish East Bank Regional Library, Bud Faust will be signing copies of his book for all those lucky enough to attend!