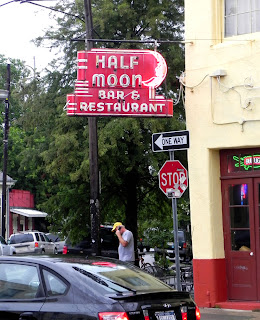 Like the Circle Bar, the Half Moon Bar & Restaurant on the corner of St. Mary Street is a local watering hole that I used to frequent quite often.  It was at the Half Moon that I heard about a shooting that happened on St. Charles Avenue during Mardi Gras ’03…a mere block from where I was standing while screaming for beads and downing beers from a backpack. At the Half Moon, my friend and I played pool with a man named “Sweat” (our first mistake) who relayed to us his recent release from Angola before he and his perky girlfriend stole my purse. Finally, it was at the Half Moon where I sat out in their (previously) dingy courtyard, drinking pitchers of Guinness with my friends around an old rusty table, accompanied only by the cockroaches and the rain till the break of dawn.

I loved that place… 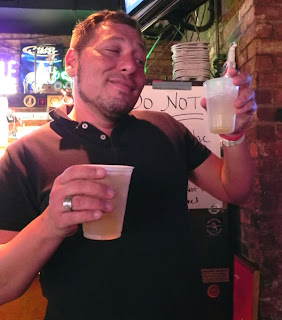 For the first time in several years, I visited the Half Moon this Tuesday night with Ryan Tramonte, his BFF Dore and of course, John.  I had arrived on the scene early and asked Tammy, the bartender on duty, if they had a special cocktail.  She suggested a bar shot called the “Kitten Whisper” with watermelon vodka, sour mix, a splash of cranberry juice and a spritz of 7UP.  As she mixed the drink, I couldn’t help but notice the changes.

Several large tables now stood where two pool tables used to be and a large chunk of the back wall was missing revealing a) one of the missing pool tables, b) an air hockey table and c) a kitchen!  Yep, the Half Moon Bar & Restaurant had become a restaurant again!  When I used to hang there we’d order from Cafe Roma across the street.  I’m so glad they took advantage of their kitchen once again. 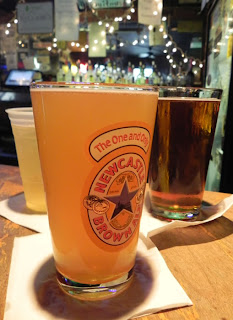 Everyone arrived just as the last shot was being poured and we started the happy hour bottoms up.  The “Kitten Whispers” were cool and refreshing…not too sweet and played nicely into a round of beers.  On a goofy suggestion from me, Ryan decided to try a “Pineaboo“, Malibu Rum and pineapple juice, but also ordered a backup beer, and two-fisted his way over to a table.

While discussing the changes in the bar, Dore mentioned the renovation of their patio and I was up and running before she finished her sentence.  Pushing through some strips of heavy plastic, I made my way outside to a Half Moon wonderland!  A gorgeous tiled floor with brightly painted murals on the walls and fences enveloped the new dining patio filled with tables and benches a go-go!  The rain was all that prevented me from dragging everyone else outside. 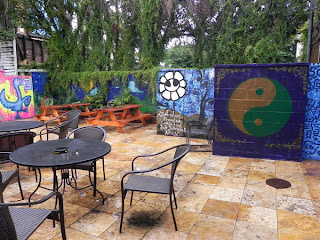 While I was away, Dore and John decided to order some food from the kitchen.  Dore ordered a Philly Cheesesteak sandwich wrap and John got a cheeseburger.  I nibbled on some of their steak fries and took a few bites of Dore’s sandwich which was tasty, as well as excellent sustenance for a long night of drinking in New Orleans.

Enjoying the relaxed atmosphere in the dark, spacious bar, we chatted easily while finishing our drinks.  Someone played The Cure on the jukebox, one I recall funnelling a lot of money into, and it made me feel so very comfortable. It was with much reluctance and shuffling of feet that we finally decided to go our separate ways home. 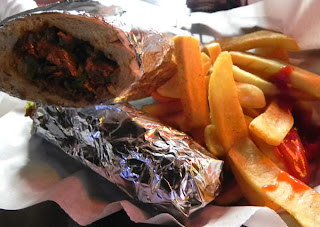 Although we didn’t meet any ex-convicts or hear any shocking news, we still enjoyed a great happy hour at the Half Moon, a comfortable neighborhood bar that I will always recommend and frequent as often as I am able.  After all, I don’t expect my adventures in New Orleans will ever end…and that’s just how I like it.