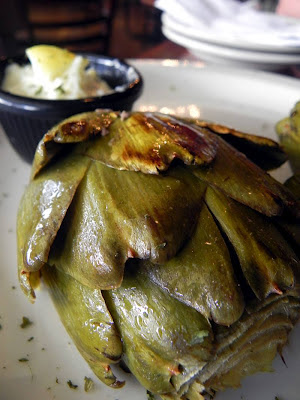 More than Twain’s well-beloved urchin, whenever I think of the word “Huckleberry” I can’t help but be reminded of the movie Tombstone. Val Kilmer played the sexiest, gun-slinging “lunger” I’d ever seen and it’s hard to erase something like that from a young woman’s memory. All fantasies aside, I just couldn’t get Doc Holiday out of my head as my friend Dani and I headed for HuckleBerry’s Restaurant in Harahan.

We were running errands together, enjoying a girl’s day out, and we happened to be in the area when I suggested we try the new Hickory Avenue restaurant recently opened by Henry Guste (the Guste family has owned/managed Antoine’s since 1924). HuckleBerry’s was intended to be a more casual eatery featuring classic New Orleans dishes at an affordable price. I believe they have succeeded…
Dani, who is an avid artichoke lover, implored that we start with the Artichoke Aioli appetizer, which turned out to be pretty much what it sounds like. A simple steamed artichoke was split, grilled and served with a garlicky aioli. It was tasty and between the two of us, we had no difficulty gobbling it up. 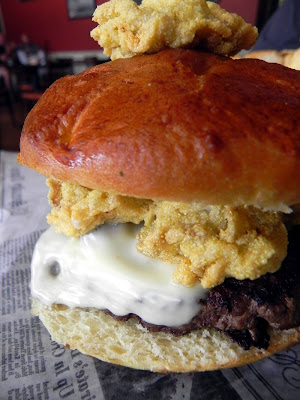 We had a rough time trying to decide on which entrees to try, but we finally settled on a choice and without too long a wait, they arrived. Dani chose the Hot Roast Beef French Fry Po-Boy, a super-sloppy 9 inches of beefy bliss on a soft Leidenheimer roll. I often find roast beef po-boys to be somewhat bland (except for a few choice favorites), but this was definitely not one of them. The meat was juicy, slathered in a rich, dark brown gravy and so tasty that I have to admit, I was a little jealous.

I ordered what is touted on their site as a signature dish, the Oyster Burger. Plump oysters battered in cornmeal and deep fried topped a ground beef patty smothered in melted Swiss, all of which was sandwiched between a delightfully glossy brioche bun (Leidenheimer again, of course).  My sole, minor complaint is that the burger was too well-done for my taste, though I asked for it medium, making the beef a bit dry. Otherwise, a very tasty burger.
We both were stuffed, but I couldn’t leave without trying dessert. We agreed to share a slice of Huck’s Chilled Choco Cake and were not disappointed. Dense, moist and decadently rich, the cake was everything we hoped for drizzled with raspberry sauce. If anyone decides to lunch here soon and needs a sidekick, don’t fret…I’ll be your Huckleberry.