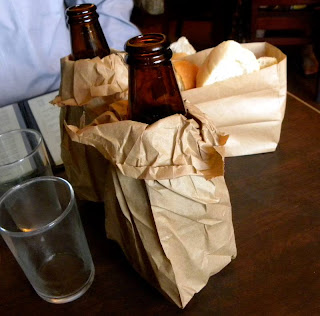 “…When my brain begins to reel from my literary labors, I make an occasional cheese dip.”  -John Kennedy Toole (A Confederacy of Dunces)

Toole’s beloved character never invoked in me the desire to eat.  In fact, his crazy antics and foul lack of self-sanitization would actually induce quite the opposite.  Nonetheless, I can understand why a proprietor would choose to name their establishment after Ignatius considering his creator’s fame and association with New Orleans.  Although they didn’t offer any kind of cheese dip, John and I had the pleasure of dining at Ignatius Eatery (4200 Magazine Street) last night for my 29th cheat.  I have held steady to last week’s weigh-in and I am still only down 53 pounds. I seem to be at a standstill lately, but I just have to keep my chin up, continue pressing onward and I know I will eventually reach my goal. 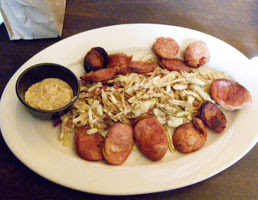 We stepped into the small restaurant and easily found a table at around 6:30 p.m.  The tiny eatery was only half-full and we took a little time to enjoy the décor.  Ignatius has styled itself an eatery and grocery offering local food items like several flavors of Zapp’s Potato Chips, cans of Tony’s, and huge jars of Zataran’s Creole Mustard among others, the only glaring omission being Hubig Pies.  We ordered a couple of Abita’s, which were served to us in brown paper bags to catch the condensation and although the idea was cute, I kind of felt like an alcoholic who had to hide his habit. My personal paranoia’s aside, I still enjoyed the local theme of the décor. 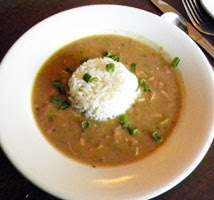 After leisurely perusing the menu, John and I narrowed down our selections, none of which were a po-boy.  I realize Ignatius is mainly a sandwich shop, but since we were there for dinner, we thought it appropriate to try out their more formal entrees.  After a short wait, our server brought out some sliced French bread (also served in a brown paper bag) and a carafe of warm water with two small glasses.  I thought it was odd that there was no ice, but someone mentioned that the beverages were served “Camp Street Style.”  I am not sure what that means so feel free to comment and teach me a thing or two!  Does it just mean no ice?

While we munched on some bread, our server came out with our appetizers: a bowl of Plantation Chicken & Sausage Gumbo and some Grilled Alligator Sausage.  Aside from the temperature (lukewarm), I thought the gumbo was quite tasty.  I had never tried a gumbo made with a golden roux and found it pleasantly nutty and creamy.  The alligator sausage, cut into slices and grilled up till almost crispy, was served with vinaigrette coleslaw and a small dish of Creole mustard for dipping.  The sausage was delightful and I am sure I would come back to order the po-boy version of this appetizer. 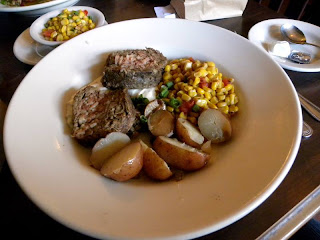 For our entrees, John selected the Boudin Stuffed Meatloaf and I chose their Fish Magnolia.  Now, I have never been a fan of meatloaf, but John’s dish was delicious!  It was a house made meatloaf stuffed with Poche’s pork and jalapeno boudin served atop a creamy horseradish sauce.  My dish was tilapia pan sauteed in buerre-blanc and topped with crawfish tails, bell pepper, and tomatoes.  Unfortunately, I found the flavor of the dish to be frightfully bland.  Perhaps the chef was experiencing an “off-day” but the buerre-blanc (literally translated as “white butter”) was completely devoid of butter!  The sauce was the both the flavor and consistency of water.  I hope this isn’t the customary preparation for their most expensive entrée ringing in at $17.95. 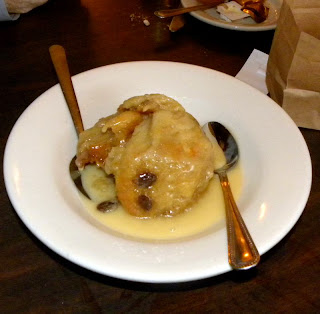 At last it was time for dessert and since our server was gushing about the bread pudding, we ordered it.  It came out steaming hot and in a shape I’d never seen before, kind of like a large softball.  Although it tasted nice and had good texture, the sauce was again missing butter.  Perhaps the restaurant mysteriously ran out?  I just can’t comprehend any restaurant “Celebrating Everything NOLA” lacking sauces heavy with butter.  It just seems blasphemous.

I am willing to return and try their po-boys, since every restaurant has its strengths and weaknesses. Ignatius has already been praised as the best lunch place and it is quite possible their po-boys will simply blow me away.  Finally, in keeping with their theme, I think it would be hilarious if they served cheese dip, Lucky Dogs, bologna sandwiches and Hubig Pies on occasion in honor of their namesake.  I’m sure Ignatius would get quite a kick out of it…especially if it was comped.