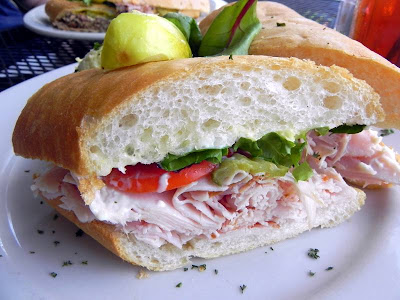 When you work from home, it’s real easy to become something of a recluse. You wake up, scratch yourself, roll out of bed, grab some coffee as you stumble through the kitchen, and then plant your ever-widening backside at your desk. After that point you rarely rise from your chair, aside from bathroom and replenishment breaks, until rather late at night when you stumble back into the bedroom and pass out.

Things that other people do everyday fall by the wayside because they are no longer required in your routine…things like getting dressed, brushing your hair and, as nasty as it sounds, taking a shower. What do I need to take a shower for? I have spent several days in the exact same, lazy-day outfit — something an old co-worker of mine dubbed her “housecoat” — and relished every minute I didn’t have to “dress my best” for a thankless job requiring me to be “on the same page” and “brain dump” on demand at some ungodly hour in the morning. 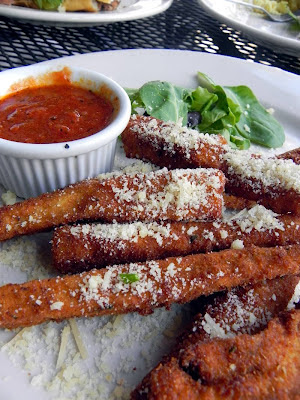 But…I must admit that after a while, I desperately need to get out of the frigging house.

Last week I did just that. I showered, donned clean clothes and left the house with John to have lunch at Katie’s Restaurant in Mid City. We decided it would be a good idea to sit outside and soak up some Vitamin D and breathe fresh air for a while. Our server quickly took our order and we sipped iced tea and tried to figure out what the graffiti on the side of the house facing us used to say before it was painted over.

We had ordered an appetizer of “Jenny’s Garlic-Feta Fries,” but our entrees arrived first. A bit confused, I queried our waiter.

Then, out of the blue, he took off running down the block. 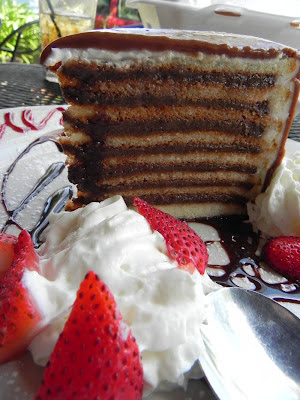 We didn’t know if or when he’d be back, so we just started eating our entrees and hoped for the best. John chose Katherine’s Cajun Cuban with smoked cochon de lait, grilled ham, Swiss cheese, mustard, and pickles pressed in between two thick slices of French bread. The cochon de lait was moist and the sandwich tasted pretty good, but it had been brushed in garlicky butter on the outside that made for messy handling.

I just wasn’t in the mood for anything fried or greasy, so I ordered an “oven roasted” turkey sandwich fully dressed on French. From the name, I was hoping that this was a real turkey sandwich, you know, thick slices of juicy turkey from a house-cooked bird, but it wasn’t like that at all. It was like a plain, old turkey sandwich from a grocery store deli…I’m guessing Boars Head? It wasn’t a total loss, the potato salad I had on the side was almost perfect.

Anyhow, as we were munching away, our server pops up behind us magically (I guess he made the block?) and placed the eggplant fries on our table. They turned out to be just so, so. Sprinkled with canned Parmesan and kind of bitter, the only part about the eggplant I really enjoyed was the marinara dipping sauce. *Soapbox* Don’t ever underestimate the value of “sweating” sliced eggplant before cooking!

As we boxed up half our sandwiches to take home, the waiter popped up behind us once again and asked whether we’d like dessert. After being offered the usual bread pudding (is it mandatory that every restaurant in New Orleans serve bread pudding?), we opted for a slice of Thin Mint Doberge (dough-bash) Cake made by that fabulous baking beauty, Debbie Does Doberge. It tasted like a big, many-layered, creamy, decadent slice of an Andes Mint minus the metallic green wrapper.

After lunch, we went back home, I changed back into my housecoat and plopped down in front of the computer once again. Work, work, work… 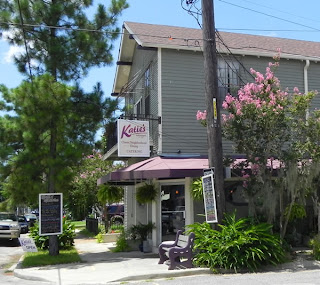 Ever since I read about the recently re-opened Katie’s in Mid-City, I became anxious to give it a try.  After all, Katie’s has been around since 1984 and though it’s not as old as Mandina’s or College Inn,  staying in business for over twenty years is nothing to sneeze at.  On Thursday, John and I chose to have lunch at Katie’s Restaurant & Bar.  This is my 42nd cheat and I am down 59 pounds.  Slowly but surely…

The lunchtime rush was just starting to fade when we wandered towards the cute, neighborhood cafe on the corner of Iberville and S. Telemachus Streets.  We stopped to read from the specials chalkboard and saw an older woman just inside the door waiting to greet us.  From what I read on their site, I assumed our gracious hostess was Mary a.k.a. the “Hostess with the Mostess” and the mother of owner Scott Craig.  She gave us menus, but I think by that time, we had already mentally selected an item from the specials board. 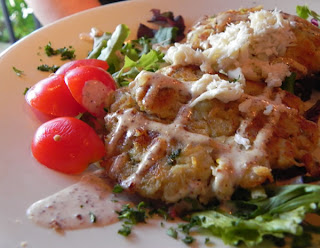 Our server came and took our order, swiftly returning with our drinks while we eyed the food at neighboring tables.  We were really hungry so the wait seemed longer than it really was, but our forks were clutched in our greedy hands by the time the appetizer finally arrived.  We didn’t even bother with the little plates the server brought us and dove right into Katie’s Homemade Crab Cakes.  The menu elaborated a bit when it touted that they were “over-stuffed with Louisiana crab meat”, but they weren’t the usual disappointment, i.e. crab flavored bread crumbs.  I am pleased to say they offered more crab than I expected and to make it even better, the remoulade was tart, a tad spicy and generally delicious.  In fact, I wouldn’t have minded a bit more sauce. 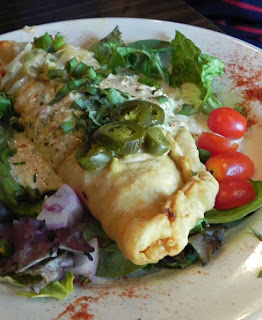 When my Crawfish Beignet with jalapeno aioli arrived, I almost thought I had received the wrong order.  It kind of looked like a large omelet surrounded by lettuce and cherry tomatoes.  I cut into the “beignet” to find large crawfish tails, tons of cheddar and jack cheese and thick slices of pickled jalapeno.  It was almost like a quesadilla served inside puff pastry with a spicy aioli sauce poured over the top.  I ate it (who doesn’t love cheese and jalapenos?) but it was strange nonetheless.

John’s order, also from the specials menu, was Tuna on “Ciabiatia” a.k.a Ciabatta with Bleu cheese crumbles and mixed greens.  They served the sandwich in a large basket with thin, crispy French fries which I thought was a cute presentation technique.  Unfortunately, although John ordered his tuna rare it arrived done and was rather dry.  The manager offered John something else, but his dining mood was ruined (this had happened to him several times in the past) and he declined.  With no more ado, she removed the cost of his sandwich from the bill. 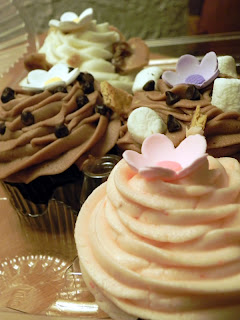 We considered dessert, but all they were only offering White Chocolate Bread Pudding.  As delicious as it may have been, John and I have been a bit burned out on bread pudding.  I understand it’s a classic New Orleans dessert, but so are pralines and banana’s foster…

Anyhow, on my suggestion and with a big hearty sigh from John, we drove across town to visit Bee Sweet Cupcakes on Magazine Street (is it “Bee” or “Be”? Sign and site disagree with each other), a couple of doors down from Whole Foods.  As soon as you walk in, tiers of fabulously decorated cupcakes greet your eyes and it is difficult to choose only one…so we got four.

We walked out of the quaint cupcake shop drooling over four fabulous flavors; Gimme S’More, Pralines & Cream, Strawberry Tart and a Chocolate Manic Attack.  All four were really wonderful (and incredibly sweet), but my favorite was the Strawberry Tart…both the icing and the moist cake tasted like they were laden with fresh strawberries…absolutely scrumptious and a wonderful finish for my cheat.

I’ve learned quite a few important lessons on this cheat like the importance of proper spelling, that the shape of a beignet is in the eye of its creator and if I want tuna cooked rare, I have to visit a Japanese restaurant.  Most significantly, I’ve learned that even though they don’t always turn out perfectly, each new eatery I visit presents an element of risk and I will never know what culinary surprises await me.  All I have to do is summon the bravery to take the next leap…