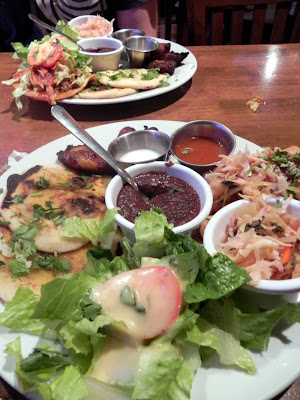 John and I actually went out to eat at two different restaurants this past weekend, but since the first experience was a real disappointment, I thought it would be nice to write about a good experience instead. After all, the bad ones are such downers…aren’t they?

So, in an effort to stay positive, we stayed in our own ‘hood and walked over to La Macarena Pupuseria & Latin Cafe on Hampson Street only a few blocks away. We got there a bit early for dinner, but we were trying to catch the light for good pictures. Though we felt a bit like old-timers catching the early bird special, we tried to be nonchalant as we seated ourselves to a table by the window in the small, brightly painted restaurant. We placed an order with our friendly server and then crossed our fingers. We both had heard great things about La Macarena, but we were also afraid of yet another not-so-great experience.

We started the adventure with a “Salvadorean” shrimp ceviche and after our first bite, we both heaved a sigh of relief. It was fantastic! The shrimp was plentiful and the perfect consistency, not too rubbery or too soft and everything tasted so fresh and bright from the finely chopped tomatoes and onions to the leafy cilantro. It was served with four toasted rounds of French bread, but I think I would have preferred tortilla chips instead as the bread disappeared way too fast and we found ourselves scooping out bites straight from the spoon. It just wasn’t the easiest way to share an appetizer. Thank goodness John and I aren’t afraid of sharing each other’s cooties! 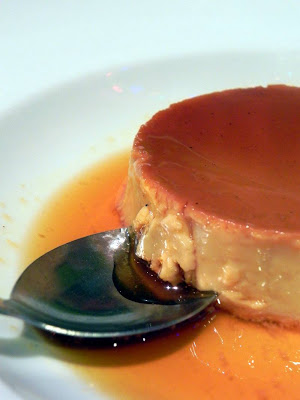 Shortly after we wolfed down the ceviche, our very similar entrees arrived. We both ordered their “traditional plates” of pupusas, but mine had the addition of three chicken flautas and John got the beef tostada. Anyhow, we both agreed that the pupusas were definitely the star of the whole show; tender, fluffy corn tortilla pillows layered on the inside with ground pork or chicharrón. Both of our dishes were also served with house-made, refried black beans and sweet, plump, fried plantains. I really enjoyed the beans and unsuccessfully tried to sneak a spoonful from John’s plate after I had licked my own little bowl clean.

I simply couldn’t resist when our server touted their house flan, even though both of us were stuffed full. John waved the idea of dessert away, patting his tummy and groaning with every move, but after I convinced him to take a bite, the competition was on. It had a dense, almost cheesecake-like feel and tasted of a heavenly, buttery toffee. It was awesome to find yet another great restaurant within walking distance of our apartment and you know what’s even cooler than that? They deliver…