Before I moved to New Orleans, the only way I’d ever seen a band perform live was at a huge venue like when Pink Floyd played the Oakland Coliseum for their Momentary Lapse of Reason Tour or when Jimmy Page & Robert Plant played the San Jose Arena.  I had no conception of what it was like to watch musicians work so close to the audience that we could just reach out and touch them, not to mention buy them a drink after the show.  So you can imagine how awestruck I was when I witnessed, for the very first time, a live band in a small New Orleans venue.

Shalom and I had dropped into the Circle Bar for a few beers one afternoon when our bartender, a handsome, red-headed man named Luke, handed us a flyer.  “Just a little shameless self-promotion,” he mumbled with a grin.  We looked down at the flyer advertising the Happy Talk Band, with Luke Spurr Allen singing lead, playing at the Dragon’s Den the following night.  It was only a $5 cover and due to our current state of employment (we didn’t have jobs yet), we had foreseen nothing in our busy schedules that would prevent us from attending.

So that following evening, Shalom and I drove just past the French Quarter and miraculously found a parking space on Esplanade Avenue only a couple of blocks from the Dragon’s Den.  Although the flyer said the music would start at 10 p.m., we climbed the seemingly unstable staircase only to find the band was still setting up.  We would soon learn that when going to a show in New Orleans, 10:00 really meant 10:30 or 10:45…

We wandered around the darkened bar, checked out the balcony overlooking the street, bought a couple of beers at the bar and sat down.  Before long, more people came in and got their hand stamped and milled around with a casual air, waiting for the band to begin.  Suddenly the lights were lowered and Luke said a few words introducing himself…then the music began.  Through the acoustic guitar and upright bass, Luke Allen, the man we knew simply as our bartender, began belting out the first few stanzas of  “Ash Wednesday”:

From that moment on, I was entranced. Shalom had experienced seeing live bands before when she lived in Austin, but for me…I was completely stunned.  The part that fascinated me the most was that after the show was over, we could go and say “Hi!”   We could tell them all how much we enjoyed the show, face-to-face!  Hell, we could even discuss it with Luke (and the rest of the band for that matter) the next time we were at the Circle Bar.

Seeing Happy Talk perform became an obsession with us.  We became regulars, followed their act all over town and I found myself distraught every time I was forced to miss one of their performances. Friends back home in California were forced to listen to my constant raving about this new passion…my mania.  When they had their CD release party at One Eyed Jacks, I was there with friggin’ bells on and $20 clutched in my hand to buy their first album, Total Death Benefit.

When I look back on those days now, I realize I had become a Happy Talk Band groupie and I am kind of embarrassed to admit it.  Not because Happy Talk isn’t an incredible band, but because I was 33 years old!  Who becomes a groupie at that age?  I thought I had left that kind of idolatry behind me when I turned 18.

It was only after several months that my fixation began to pass and I found other bands and other venues that I enjoyed all over New Orleans, from Gal Holiday and her Honky Tonk Revue at the Banks Street Bar to Big Sam’s Funky Nation at Tipitina’s. Over time, I have been exposed to some of the finest musicians in the world (in my opinion) and I have been able to tell them, face-to-face, how wonderful I think they are.  I get to show my appreciation by dropping fives and tens into their tip jars and by dancing my heart out to the incredible rhythms they create.

Believe it or not, I attribute all of these moments to that first infatuation…that first love I had with the Happy Talk Band and I will never forget it.

Just in case you’ve never heard them, you can catch the Happy Talk Band this Wednesday, April 28th at Chazfest along with a bunch of other fantastic local musicians like the Hot 8 Brass Band, The Geraniums, My Graveyard Jaw and more.  You might just see me there, swooning to the sounds of the Happy Talk Band once again and who knows?  You might just fall in love too… 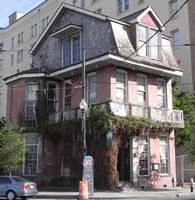 It’s really hard to miss, but a lot of people don’t notice it.  It appears as if it’s ready to collapse, but has unbelievably withstood Katrina, Rita and Gustav and that’s only since I’ve lived here.To Mardi Gras revelers, it might just be forgettable (that tiny club on Lee Circle where we stopped for a drink after Bacchus?), but I just can’t stop myself from remembering.

My very best friend Shalom and I were cruising down St. Charles Avenue late in the afternoon almost seven years ago and as we made the turn into Lee Circle, we spied the ramshackle building on the corner with a large sign bearing the word “bar”.  I distinctly remember Shalom saying, “We gotta check that place out.”  Shalom had an uncanny itch to explore every dive bar in the city and I knew it was only a matter of time.

As it turns out, the Circle Bar became our “bar of choice” and most of our drunken adventures would begin, and even end there.  In the time that I spent there, I enjoyed incredible local music from the Happy Talk Band, Clockwork Elvis, Big Blue Marble, Alex McMurray, Gal Holiday & her Honky Tonk Revue and so much more.  Because of our frequent appearances and blatant love, DC (lead singer of Clockwork Elvis) serenaded Shalom and I a Capella not once, but twice while standing on top of the bar…singing our all-time favorite Elvis tune, “Suspicious Minds.”

There is just something so comforting about sitting at the bar, sipping on a cold glass of Guinness, whiling away the hours chatting to the bartender or listening to your favorite selections on their most excellent jukebox.  I have never come across another jukebox with such an awesome selection of oldies from artists like Patsy Cline, Ottis Redding and The Animals.  You could even lounge under the glowing K&B clock mounted on the ceiling, relaxing on thrift store chairs while watching the traffic flow around Lee Circle.

I’ve munched on grilled peanut butter, banana and bacon sandwiches in honor of Elvis Presley’s Birthday, enjoyed Caroline’s (an excellent bartender) fabulous spicy Gazpacho that she always makes during the summer months and it was the first place I tried some fantastic beef jerky brought all the way from Lafayette for their signature Bloody Marys.

Things have changed a lot since the Circle Bar was my preferred hangout. But from what I hear on Facebook, things have just been getting better. They are featuring live shows from The Geraniums, White Colla Crimes, Shannon McNally, Glasgow…and like in the “good ole days” most of their shows have no cover charge!  Also, I am pretty sure Caroline still works behind the bar, offering good advice, a warm smile and if your really nice, she might even make you her signature drink, the “F**k me up.” I can tell you from experience that is not a misnomer.

So, even though you must have driven past it hundreds of times, tonight might just be the night you pull over, stroll into the darkened bar, order a cold drink and just let the atmosphere wash over you.  This is the neighborhood bar you’ve been looking for even though its been here, all along, right underneath your nose.