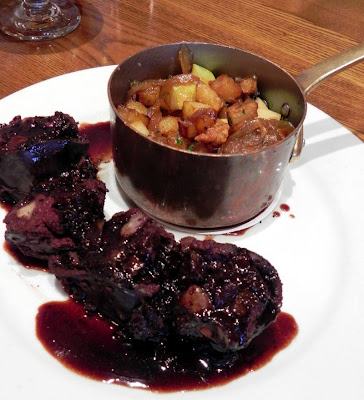 If you’ve ever enjoyed a hearty lunch at Lüke, you know that it’s not exactly vegan-friendly, nor is it for the faint of heart. A few weeks ago, John and I braved the meaty wilds at 333 St. Charles Avenue and lived…just barely.

We decided to start our adventure with the Boudin Noir appetizer served with a saute of potatoes, apples and onions on the side. This foray into blood sausage turned out better than either John or I could anticipate, and while the texture took some getting used to, the flavor was wondrous, especially balanced with bites of the apple and onion mixture.

Although they served the appetizer with small, warm loaves of French bread, John and I restrained ourselves for the more than bountiful entrees. John decided to go “whole hog” and order the Choucroute Garnie Maison with smoked pork shank, Mangalitsa belly, bratwurst, and house-made sauerkraut. This huge pile of pig meat is utterly delicious and could easily feed two, but because we’re both little piggies ourselves, I ordered my own entree instead of sharing John’s and we ended up with a large, heavy bag of leftovers. 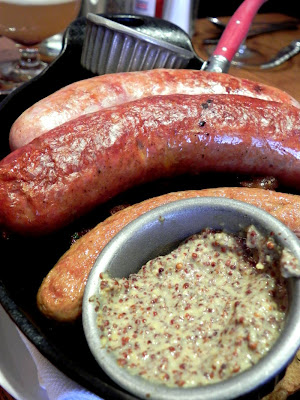 I chose the Plat Lyonnaise featuring three different handmade sausages served with pommes lyonnaise and house mustard. Yes…more pig meat and yes, it was delicious. Plus, the potatoes (a..k.a. pommes lyonnnaise) that were hiding underneath the sausage were buttery blobs of heaven and I couldn’t really be sure which I gobbled more aggressively, the potatoes or the sausages. By the way, the server informed us about what kinds of sausage were served, but at the time, I was too busy drooling over the “pork-ucopia” in front of me to pay much attention. What can I say? I was hungry.

Although were were literally stuffed “up to here” (I lack a visual representation of my hand held level with my throat), I had to order dessert. Didn’t I? I chose the Dark Chocolate Bavarois with Devil’s Food Cake, rich cherries and coconut ice cream. Unfortunately, this was the sad point of our meal instead of the delectable send-off it should have been. The ice cream was delicious, as were the cherries, but the “baravois” or Bavarian Cream was the texture of dried paste and the cake was also rather moist-less, the only saving grace being that the ice cream topped it. I believe it was one of the very few desserts we’ve ever neglected to finish.

The dessert was a bummer…so what? We made up for it later that evening when we feasted on our pork-laden leftovers. 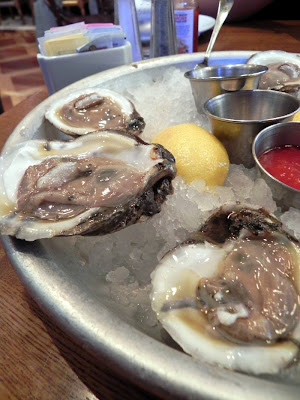 I met someone and I think I’m in love. He’s sweet, accommodating, relaxed yet stylish and extremely tasty as I was fortunate enough to discover last Friday afternoon. My friend Anne was there, too and we both enjoyed what he had to offer…I’m pretty sure anyone would.  His name is Lüke.

Now I could keep going with this and assuredly suffer from gales of mischievous and unabashed laughter while writing, not to mention possible castigation from my peers after publishing (suck the heads would take on a whole new meaning). So, instead I’m going to lace it up and talk about the food. I promise, if I start writing that kind of blog, y’all will be the first to know…
Nevertheless, it was still quite a sexy lunch. Anne and I got to the restaurant just after noon, luckily scoring a choice parking spot only a half block away. For those who don’t know, Lüke is located on St. Charles Avenue only blocks from Poydras Street and right, smack downtown. Like any city, finding parking is nigh impossible and it seemed like fate when we slipped into a spot that opened up right in front of us. 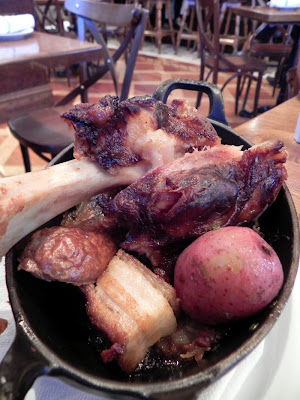 We were seated right away, without a reservation, and ordered a couple of cocktails while perusing the menu. Both of us ravenous, we got a little carried away with our order. Thankfully, our server steered us onto the right path, when he could have just as easily let us order way too much food like a couple of boobs. (really, I’m not even trying…) Anne had a “St. Charles Streetcar” with St. Germain, pear vodka and champagne, which was tasty, but I liked mine better and not only because of its name.  Dubbed “The Riverbend,” my cocktail was of the refreshing, summery type with Ultimat vodka, lemon, basil syrup, blueberries, cucumbers and ginger ale

Almost right away our first dish arrived, a half dozen raw Gulf oysters on the half shell. When Anne saw them on the menu, she just couldn’t resist and I don’t blame her. They were large, ice cold, salty and perfect. I think both of us were a little sad when we slurped down the last one, but we didn’t have time to consider ordering more because our next appetizer showed up just in time. Called “flamenküche,” it was an onion tarte with thick hunks of fatty bacon and a creamy Emmenthaler or Swiss cheese. It was quite possibly the best thin-crust “pizza” I have ever eaten. 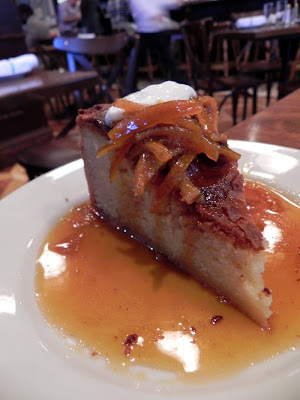 For our entree, we both wanted the “Choucroute Garnie Maison” and thanks to our server, we wisely decided to split it. I had to look this up, but apparently this is a famous Alsacian dish of sauerkraut topped with salted meats, sausage and other charcuterie. Conveniently split in half, our dish at Lüke featured a smoked pork shank, a hunk of Mangalista pork belly and a huge link of bratwurst. Basically, it was a unadulterated pot of meat that while feasting upon it, made me feel a bit carnal…not that I’m complaining.

While perusing mandatory desserts, Anne was quite adamant about not sharing (dessert can do that to people), so we each ordered our own. Anne chose a “Gateau Basque” or vanilla cake with crème fraîche and local satsuma marmalade and I got a “Belle Ecorce Chevre Tart” – basically a goat cheese “cheesecake” topped with braised celeste figs and honey. Since I shared some of mine, Anne was willing to give up a few tastes of hers and, all kidding aside, both were quite delicious.
In all honesty, I may not be in love with Lüke, but I am undoubtedly in lust.