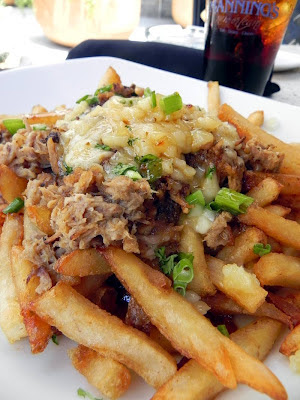 Admitting you’re not a sports fan in New Orleans is akin to blasphemy, but there’s really nothing I can do about it. Maybe it was the years growing up with my father who, firmly ensconced on the couch, would command silence when the game was on or the grating voices of the announcers rattling off plays every Saturday afternoon, drilling painfully into my brain even when faintly heard in my bedroom.

Regardless of the underlying traumatic cause, I just don’t dig watching sports, so any place touting tons of flat-screened TVs (unless they’re planning a Disney marathon) would likely only turn me off. Such was the case with recently opened Manning’s.

When I first heard about it, all that really interested me was the knowledge that Chef Anthony Spizale was taking over the helm. After all, to me, it’s really about the food.

Last week, John and I caught a cab downtown to the brand new, Fulton Street restaurant for lunch. It was later in the day, so there weren’t a lot of people, but maybe it only seemed that way in relation to the gigantic dining room. It almost felt like Disney World or some mammoth Las Vegas resort and everything still had that “new car” smell. Unfortunately for John, I veered away from all the TVs and other distractions (I become invisible when there’s a TV in the room) and chose a table on the patio. 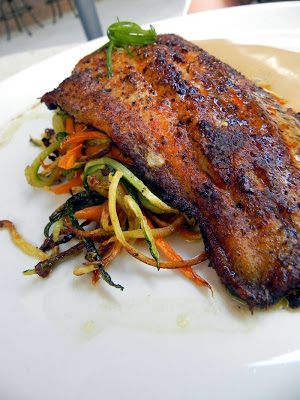 We sat outside on that almost uncomfortably warm day, praising the umbrella’s shade and sucking down ice cold drinks while we waited. First up, Cochon de Lait “Poutine” and a small, tasty bowl of Brisket Pulled Pork and Red Bean Chili. The mountainous pile of fries, pulled pork and cheese curds drizzled with pepper jelly sounded like an interesting twist on the original and, in all truth, I enjoyed the salty/sweet contrast in the first bite, but it didn’t quite work for me on the second. The pork was delicious, as were the hand-cut fries and cheese, but I dreamt of it being smothered in a thick, white gravy made from pan drippings (excuse me while I drool on myself).

For his entree, John kept it simple with one of the lunch specials, an overstuffed fried shrimp po-boy, but I wanted something a little different. I opted for the Cast Iron Catfish, a huge, heavily seasoned filet lying atop a small pile of fried julienned vegetables in a pool of meunière. Although it was a touch salty, I still inhaled the whole dish, swabbing every last bite through the sauce.

For dessert, we slapped down a whopping $6.50 for the most expensive Hubig’s Pie I’d ever eaten. A scoop of Kleinpeter vanilla ice cream topped a warm, apple Hubig’s and was served with caramel sauce. Though the overall experience was pleasant, I couldn’t help feeling like I was on vacation eating overpriced, local dishes in resort designed to mimic the feel of New Orleans…in New Orleans.