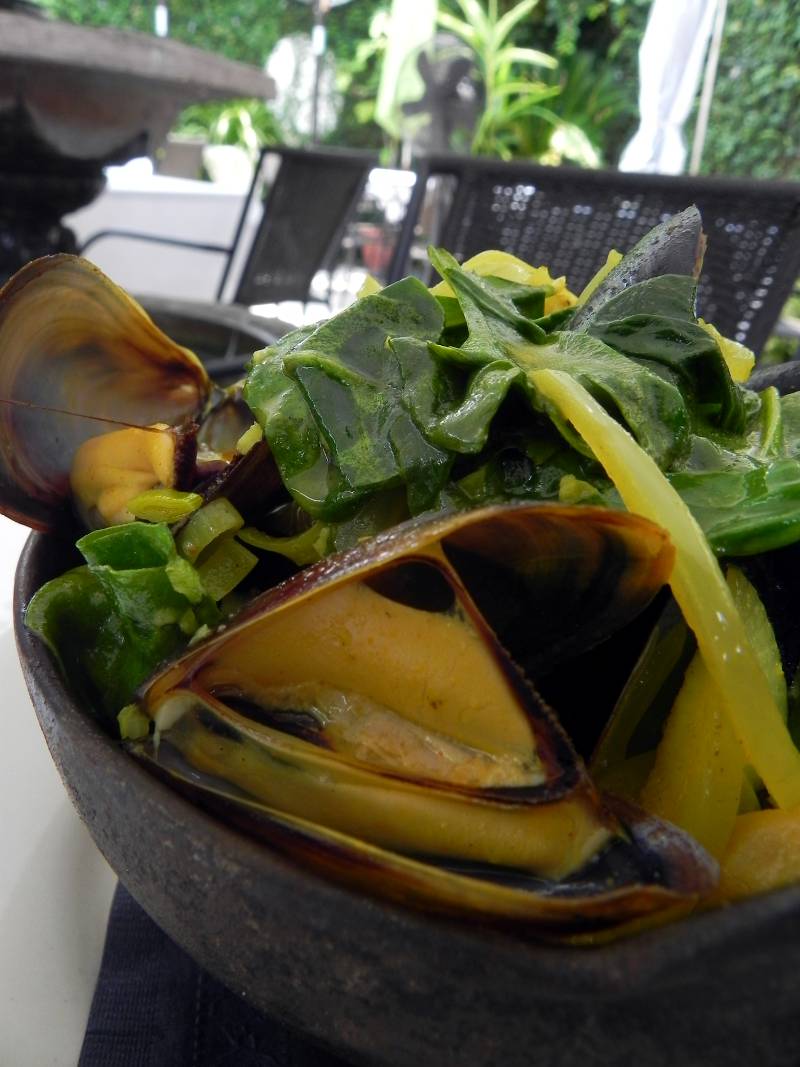 Though most people might think I’m a bit batty, I always love enjoying the warmth and sunshine while dining during the summer months in New Orleans. Yes, I realize it’s in the mid-90’s (feels like 100) and yes, I will probably be perspiring on my plate, but I just can’t help it. I’m a summer girl. I love the sun and the heat and if I can get out into it, I will. So naturally, when I requested to sit outside at Martinique Bistro last week for lunch, the server looked at me askance, but graciously complied with my wishes. It was my 89th cheat and I am still down 80 pounds.

There was a huge awning over the courtyard providing plenty of shade and we were seated next to the quaint, burbling fountain that also provided a sense of “cool.” There were also two fans aimed towards our table, but I thought one was plenty since I didn’t want to get blown away while I ate. We had the entire courtyard to ourselves and we sipped on huge glasses of ice water while deciding what to order. 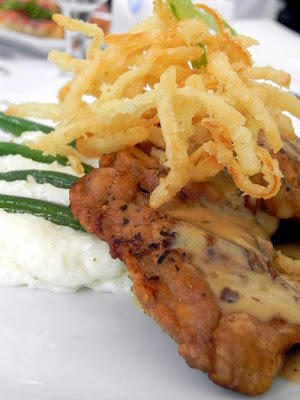 Feeling a bit hungrier this time around, John and I each ordered our own appetizers instead of choosing one to share. My salad with pistachio-crusted goat cheese, fresh greens from Hollygrove Market and apricot-raspberry vinaigrette was quite tasty. The only complaint I had was that there was just a bit too much dressing, making the greens soggy and wilted in texture, but the flavor was delightful and the goat cheese rich and creamy in a decadent. crusty shell.

John chose the Prince Edward Island Mussels steamed in a rich curry sauce. The mussels were perfectly cooked, plump, large and briny in flavor that went oh-so-well with the delicious curry. After he’d emptied all the shells, John and I both dipped hunks of buttered ciabatta (from La Boulangerie just down the road) into the leftover broth until the entire bread bowl was gone.

It wasn’t long after they whisked away our plates, that our entrees arrived. John had the Scottish Smoked Salmon Club with thick slices of bacon, fresh tomatoes, and peppery arugula on a buttery croissant lovingly spread with house-made remoulade. It was yet another delicious interpretation of a “BLT” and we both loved it, along with the crusty, herbed red potatoes that were served alongside. 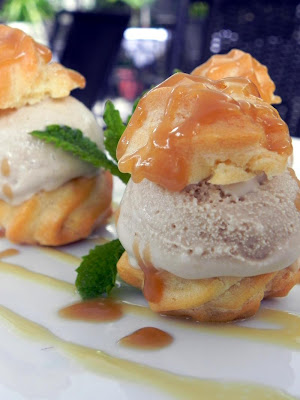 I picked a plate of  pan fried pork medallions served atop a thick pile of buttery grits and haricot verts and topped with a rich, white gravy and crispy fried onions. The pork loin medallions were tender and flavorful and I absolutely loved the gravy that I mixed up with the grits and wolfed down with great gusto.

At last, it was time again for dessert. The server regaled us with a long list of ambrosial-sounding sweets, but I couldn’t help choosing what the server described as “Irish Car Bomb” profiteroles. John looked at me after the server left and asked “What the hell is a profiterole?” We both found out when the server arrived with three dainty cream puffs filled with Guinness ice cream and drizzled with Jameson Irish Whiskey caramel and Baileys crème anglaise. Easily the best Irish Car Bomb I’ve ever experienced and all that without the nasty hangover.