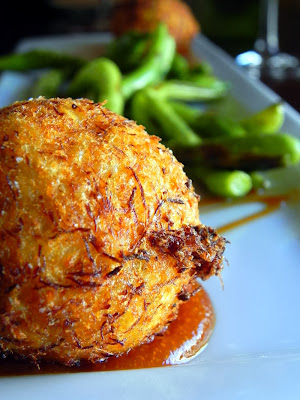 Other than swimming, exercise and I really don’t get along. My knees and lower back are a complete mess, making any strenuous activity an effort in sheer masochism. Like Buddha, I must embrace the pain simply to tolerate a walk to the bookstore around the corner. I do adore swimming, though. It is great exercise with an absolutely no pain involved, unless you count the warm, tingling soreness I experience after an hour or so in the pool. The only problem is that unlike sweating on the elliptical, doing a weight-lifting routine or even 90 minutes of yoga, swimming makes me ravenous. Seriously…I could eat the whole gym.

Instead of crunching down on stationary bikes, Anne and I decided to have lunch at Maurepas Foods. Keep in mind, this luncheon occurred a few months ago seeing as Maurepas has recently changed their hours to include brunch and dinner and lunch no longer exists. No big deal really, it’s not like they closed (heaven forbid). 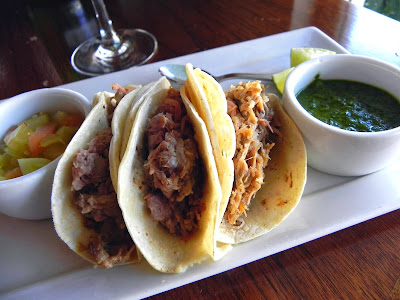 We arrived at an odd hour (around 2 pm) and the restaurant was pretty empty, but as we sat next to the window overlooking Burgundy Street, people gradually filed in for afternoon drinks, snacks and early dinners. Anne and I decided to share a couple of appetizers and the first to arrive was the Crab meat Calas with papaya and Hoisin syrup and a pile of crisp, grilled snap beans. Although the calas were savory, delicious fried balls of happiness, the snap beans really blew me away with their “fresh-from-the-garden” look and bright green flavor.

The other appetizer arrived as we were still scarfing down the first, Crowder Pea Pupusas with crowder tapenade and crowder hull syrup. This dish was so cool in that it displayed three different ways to use crowder peas, not to mention it was awfully tasty and incredibly filling. Anne and I were both a bit worried about managing our entrees after wolfing down the pupusas. 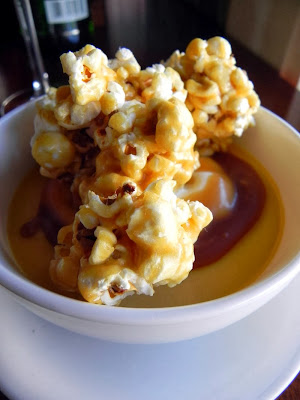 For my main dish, I chose the ever-popular Goat Tacos with pickled green tomatoes and cilantro harissa. Three piles of shredded and well-seasoned goat meat were heaped inside of house made corn tortillas and I enjoyed the rich flavor both with and without the garnishes. Anne, who was new to goat, decided to play it safe with a Roasted Pork Shoulder served with pickled squid, romesco and a mustard green vinaigrette. It seemed so strange to pair squid and pork together, but Anne thoroughly enjoyed the dish and I certainly wasn’t complaining after sampling a few bites.

In an effort to completely negate our earlier workout, we also ordered dessert. Anne desperately wanted the Pumpkin Pot de Creme with caramel, creme fraiche and popcorn ball pieces, and I wanted the Cookie Sandwiches with mint chocolate ice cream, ranger bites and chocolate syrup so instead of coming to a compromise, we each had our own dessert. I have to say, neither of us regretted our decision because both desserts were fabulous (we shared anyhow), but we probably should have headed straight back to the gym after lunch. 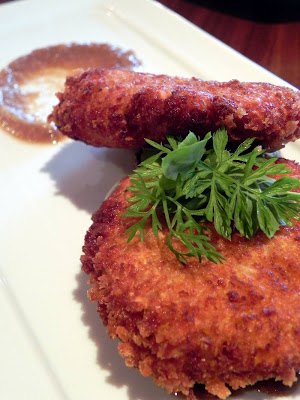 Last week, I invited my friend Dani to have lunch with John and I at the recently-opened Maurepas Foods in the Bywater. Now, when I invite Dani, I am also inviting her 2-year-old daughter Posie and seeing as how everything must revolve around nap time and the kid’s ever-variant mood swings, we didn’t exactly make it for lunch. That being said, when we finally wandered into the restaurant it was almost 4PM and I was starving. We could tell that even Posie was hungry, seeing as she waited patiently for something to munch on. Needless to say, we went a little crazy and ordered a lot of food.

A cheese plate came out first with a hard Vermont cheddar, creamy morbier and thick Landaff  served with sugared pecans and sliced ciabatta. There was a kind of chutney on the plate, but after Posie stuck her whole hand in it, I kind of lost interest. At the same time, we also shared a plate of house made pickled root vegetables like carrots, turnips, ginger and even “Romanesco” broccoli (similar to cauliflower) and lima beans. 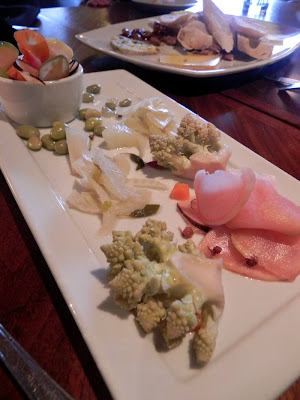 Maybe we went a teensy-bit overboard on the apps, because I also ordered their Sweet Potato Croquettes and Brussels sprouts. The Croquettes were just wonderful — crunchy and crisp on the outside, sweet and creamy on the inside — and served with a smear of a salted plum jam. There were unmistakable accents of Indian cuisine like coriander, fenugreek and cumin, which turned out to be sort of a theme for several of the dishes. The other plate of Brussels sprouts were browned with thick bacon and tossed in a “winter vegetable puree.” I chose the sprouts because I thought Posie would dig them (and she did), but the rest of us weren’t complaining either.

Believe it or not, we also got entrees and had no difficulty polishing all of them off. Dani got the Fish & Chips “Moira”  (Wendy Darling?) with crispy Lyonaise potatoes and malt vinaigrette. I am uncertain what kind of fish it was (being distracted by my own plate), but the taste I had was delightful and Dani could not stop raving about a curry sauce that came with it that brought to mind her favorite Indian dish, Butter Chicken. I think she showed admirable restraint by not swabbing up all of the heady sauce with her fingers. 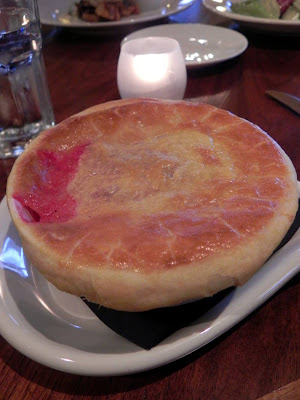 John ordered the Pork & Bacon Terrine that was served with thin slices of pickled pears, honey and mizuna or Japanese mustard. Yep, I had to look that one up. Though I did enjoy a large bite of his luscious terrine, I was really hypnotized by my own dish, the P&J Oyster Stew. Served in an oven-hot crock and topped by buttery pastry, I was a bit unnerved when I first broke through the crust. A blood-red broth oozed onto the pastry and the steam released a scent of yet more Indian seasoning. My spoon dove straight to the bottom of the hot stew only to discover humongous, plump, juicy oysters and lots of minutely-diced beets. I slurped down every last drop and scraped down the pastry from the edge of the crock until anymore foraging would have looked helplessly desperate. I would so order this dish again…in a heartbeat.

Keeping with the gluttonous theme of the entire afternoon, we ordered two desserts to share with no regrets.  My favorite was the Roasted Pumpkin Ice Cream Sundae with candied pecans and hot fudge, but I think Dani definitely preferred the fluffy King Cake/cream puff overflowing with a goat cheese filling and topped with a chocolate ganache and bright gold & green sugar crystals.

After that gorging session, it was time for my nap…