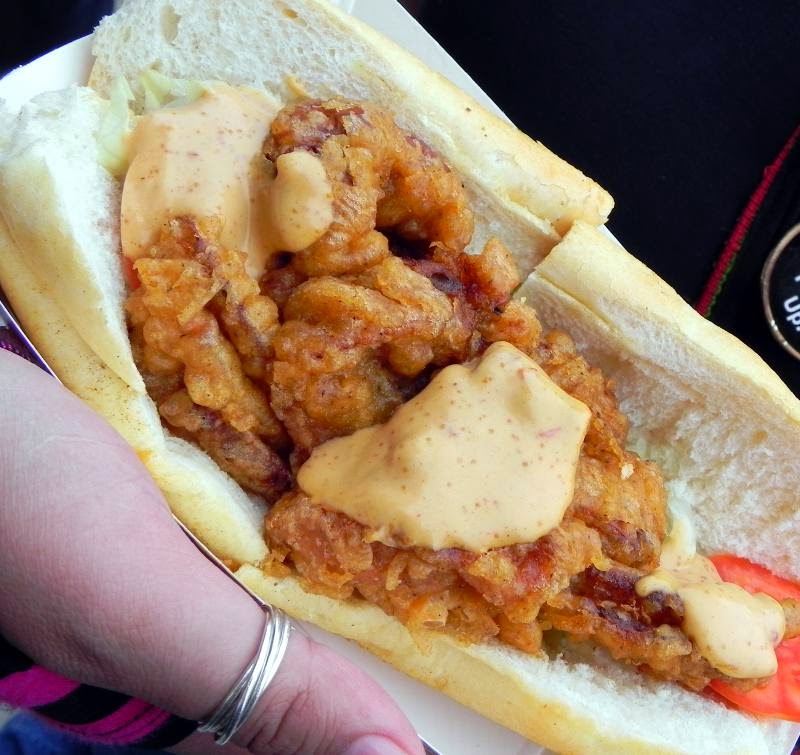 Something, or someone, doesn’t want me to go to the Oak Street Po-Boy Festival. It seems that over the past several years, fate has conspired to make me miss one of the most popular festivals of the year and it’s literally, right around the corner. Severe illness, atrocious hangovers, unexpected family get-togethers, heinous women’s issues and an overwhelming distaste for being packed in, teeth-by-jowl, like Bourbon Street on Mardi Gras Day, have come in between me and several hours of pure po-boy bliss. Not this year, I say (perhaps with too much confidence). This year, I have a plan.

After perusing the offerings at this year’s fest, I have devised a strategy that will allow me to hit the highlights within a short period of time and make it back to my apartment to share my spoils with John who (surprise, surprise) has caught the flu. Now keep in mind, I love all of the vendors and music that will be rockin’ Oak Street this year, but in the interest of sanity, I’ve had to keep the list short, avoiding experiences I could have any other day of the year. Additionally, I need to get back home to tend to John, after all, he would do it for me.
The Po-Boy Plan:
Stuffed and loaded with spares for John, I’ll likely find the quickest route back to Zimpel and head home. Will I make it this year? We shall certainly see … that is, if I don’t catch John’s flu.
Posted on November 21, 2014 by admin 0 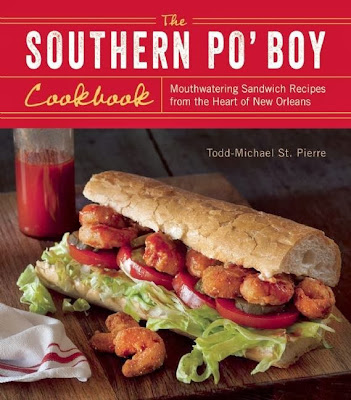 Before I moved to New Orleans, I had never even heard of a po’ boy. There were sandwiches, hoagies, subs, clubs and heroes…but no po’ boy. My first po’ boy was devoured at a restaurant on Bourbon Street whose name I unfortunately cannot recall. It was my first day in New Orleans and we had been strolling around the French Quarter for a while when we passed an open restaurant on Bourbon and the heady aroma of fried seafood made us realize how hungry we were.

I don’t remember what anyone else ordered, but I got a 12 inch Fried Oyster Po’ Boy fully dressed and a huge plate of French fries. I devoured almost all of it before I couldn’t breathe anymore and went back to our hotel room to change for the night, but I passed out from a severe case of “food coma” because I had never eaten so much fried food in my entire life. For those of you who have never enjoyed the plethora of fried pleasures that can be had in our town, believe me when I tell you to take it slow your first time out. Not even a bucket of fried chicken from KFC will prepare you for the hurt you can experience from a ton of fried oysters on French bread with mayo…not that I’m complaining. I’ve had many a po’ boy since.

Anyhow, all that reminiscing brings me to Todd Micheal St. Pierre’s latest, The Southern Po’ Boy Cookbook: Mouthwatering Sandwich Recipes from the Heart of New Orleans. This cookbook is filled with a multitude of po’ boy recipes, along with gorgeous photos, colorful artwork by local painter Dianne Parks, and of course, Todd’s well-written stories and poems. I adore the creative chapter titles like “International Affairs,” “The Unusual Boys” and “Boy Oh Boy: If It Swims, Cook It!”. Even the fun names for individual po’ boys are a hoot like “The Gert Town” which is a pork tenderloin po’ boy with Remoulade sauce and “The Who Dat” (Geaux Saints!) which has New Orleans-style BBQ Shrimp. My favorite part, though, was that Todd starts the whole book off with the key ingredient of any po’ boy worth its salt, a recipe for “Baby, I Knead You! Homemade Po’ Boy Bread.”

Considering I am a food writer, I’ve eaten a majority of the po’ boys featured in this book, from “The Kenner,” a ham and Swiss to “The Snug Harbor” with fried green tomatoes and shrimp remoulade. But there were a few I’d never seen before that set my mouth to watering as I read on. For example, I’d love to sink my teeth into “The Pacific Northwest” with baked salmon and wasabi mayo or “The French Canadian,” a poutine po’ boy with French fries and cheese curds.

I think The Southern Po’ Boy Cookbook is easily the sexiest, most visually stunning of all Todd Micheal St. Pierre’s cookbooks. But, there was just one thing about it that didn’t make sense to me. For people who don’t live in the Greater New Orleans Area, this cookbook is a valuable jewel, one that can transport you to my beloved city with some fresh, juicy shrimp and a ton of butter. But me? I am lucky enough to live here in this wonderfully unique town and if I want a po’ boy, I can walk around the corner and get one anytime I want. Sorry Todd! You know I love ya, but you also know anyone who lives in this town is already spoiled rotten when it comes to po’ boy access.

Speaking of around the corner, this Sunday, November 24th, Oak Street will be hosting its annual Po-Boy Festival where restaurants all over the city will offer some of the most unique, tongue-tingling, stomach-satisfying po’ boys ever and I couldn’t be more excited. Plus, Todd Micheal St. Pierre will be signing copies of The Southern Po’ Boy Cookbook from 2-3pm in front of Blue Cypress Books at the fest! See ya there! 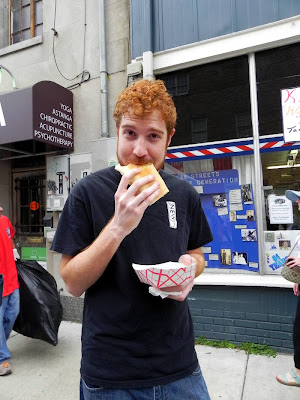 If you weren’t at the New Orleans Po-Boy Preservation Festival yesterday, you were sorely missed because it sure seemed like the rest of the city was there! From the start at 11 a.m. to the finish at 7:30 p.m., folks were lined up at every available food booth on the entire length of Oak Street, that is when they weren’t dancing or devouring their latest purchase.

I had already decided to gorge myself silly at the Po-Boy Festival this week to celebrate my 60th cheat. I am now down 77 pounds.

My friends and I began our day dancing to Clockwork Elvis while we scoped out the booths nearby, considering our choices carefully. John, not willing to wait, bought his first…a Spanish Style Pork Loin and Gouda po-boy from Barcelona Tapas Cafe which proved to be as delicious as it sounds. I’m still surprised I managed to get a bite in before John hastily scarfed the rest.

After that one taste, the race had begun. I quickly got a Sloppy Roast Beef Po-Boy from Gattuso’s and after one bite, immediately knew why they had won last year’s competition. The gravy was thick, savory and practically the only thing holding the tender meat together. It seems there’s a contender for my favorite roast beef spot now. 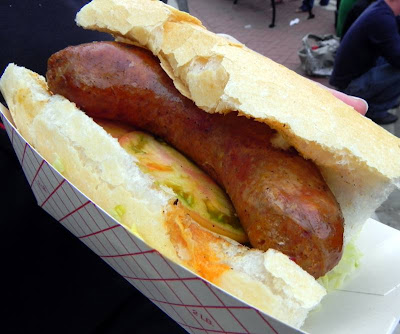 I stood in line for a Hot Sausage po-boy from Vaucresson as I inhaled the Sloppy Roast Beef, ordering just as I threw away the wrappings. Rarely disappointed by their sausage, I took a large bite and relished the popping sensation as my teeth broke the casing. Spicy, greasy and wonderful, the sausage was only lacking a bit of heat as it wasn’t nearly as hot as I had hoped.

We shambled along a bit slower, enjoying our food until we came to more booths.  Dante’s Kitchen was serving a Confit pork Cuban po-boy with black pepper bourbon mustard that sounded awesome, but the line stretched back an entire block! I heard that they sold out before the fest ended because everyone knows how awesome the cuisine at Dante’s can be. It was one experience I unfortunately missed…oh well, maybe next year. 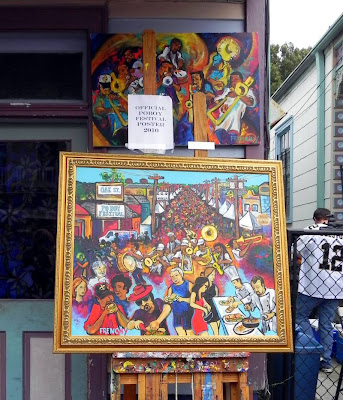 As we inched our way further down Oak Street, we discovered a bottleneck of festival-goers smashed up next to Blue Frog Chocolates who were serving, among other heavenly items, a bag full of Chocolate Dipped Zapp’s Cajun Crawtator potato chips. I stood in line yet again, determined not to miss out on this decadent treat.

While doling out some of the Chocolate-dipped chips to my friends, I noticed Frenchy’s original painting for the Po-Boy Fest poster displayed in front of his gallery. Like all of his work, it was a riot of movement and color, effectively capturing the eager crowds eating their way down Oak Street. There was a box full of festival posters for sale and although I desperately wanted one, $60 was just a little too rich for my blood and I had to force myself to move on.

Although the flavor of spicy chocolate still lingered on my tongue, but I couldn’t resist buying a Double Chocolate Whiskey Caramel Brownie from a stand that was also selling Bacon-Fried Hot Dogs. I ate the brownie later that evening and it was easily one of the best I’d enjoyed in a long time. Who were those vendors? I may never know… 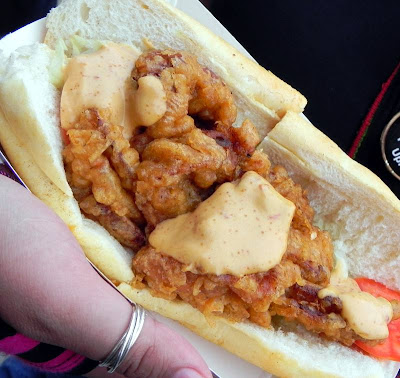 John and I were pretty full by this time, but when we saw Ninja serving sashimi po-boys, I simply couldn’t resist. Anne and I jumped into a line that seemed endless, but moved astonishingly fast and before we knew it, Anne was cradling a Deep Fried Soft-Shell Crab po-boy while I had already taken a bite of my Salmon Sashimi po-boy featuring sliced cucumber and wasabi mayonnaise. Both were fantastic!

Completely sated and a bit drowsy, we wandered back to my apartment in a zombie-like daze after eating and waiting in line non-stop for more than half a day. My friends eventually went home and John left for work. When the house was quiet (aside from the muffled noises from the fest still going on outside) I collapsed on my bed and finally succumbing to a richly deserved food coma, passed out for several hours.

Only 364 more days till next year’s fest!

Seeing as the Po-Boy Preservation Festival is almost upon us, I thought now would be a good time to remember all of the po-boys I’ve enjoyed since beginning my weekly cheats. Below I have prepared a sort of “photo-journey” capturing the po-boys from my past.

By the way, you will definitely see me at the festival Sunday, November 14th on Oak Street, one of the coolest festivals in my ‘hood!

This first picture from July 20, 2009 is of an Ultimate Roast Beef Po-Boy from Joe Sepies on Jefferson Highway. 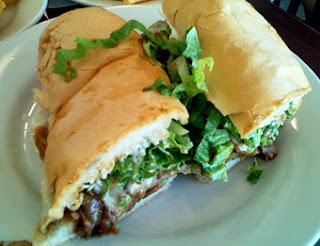 This was obviously before I acquired my bad-ass camera, but know that this is one of my absolute favorites.  If you have not enjoyed one of these babies yet, you are severely missing out.

This next bastion of deliciousness is a foot long Oyster Po-Boy with Havarti Cheese and Bacon from Ye Olde College Inn on Carrollton Avenue. I wrote this review in October of last year. 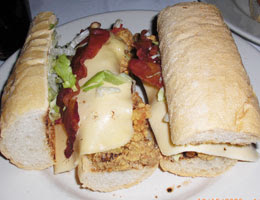 I believe it took me two days to finish this excellent sandwich…talk about an extended cheat.

Although this next one was awfully expensive, it was nonetheless delicious! Sink your teeth into this Fried Shrimp Po-Boy from The Famous Gumbo Pot. 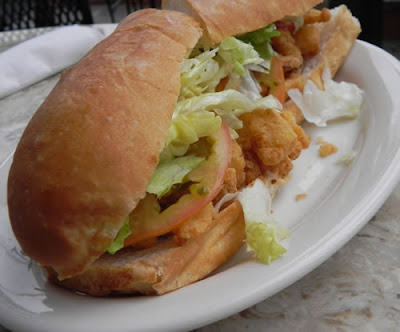 Obviously, I had my awesome camera by this point.

Among the many fine dishes we had at Boucherie, I will never forget this mouth-watering 12-Hour Roast Beef Po-Boy dressed with Horseradish cream and pickled red onions. 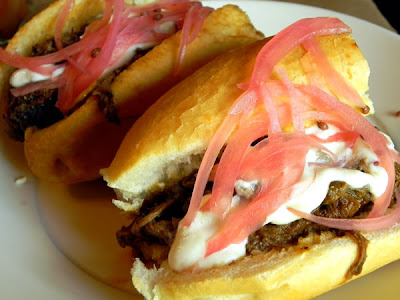 Here’s a shot of the two tasty po-boys John and I enjoyed from Frankie & Johnny’s…let ’em have it! 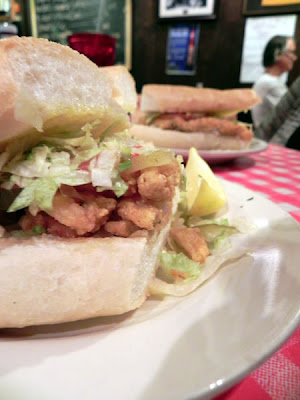 Fried shrimp and catfish side by side…oh what a wonderful sight!

Last, but most certainly not least, is this fabulous, 11 inch Fried Catfish Po-Boy (for only $8!) at Hobnobber Cafe. 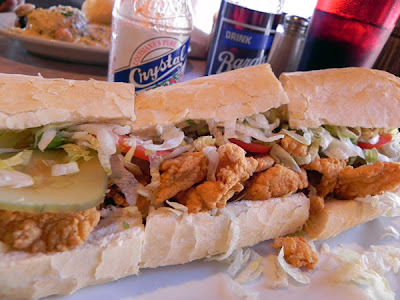 By no means are these all of the po-boys I’ve ever enjoyed, but they certainly are some of the best! I can’t wait to try out some more at the festival next weekend…hope to see you there!