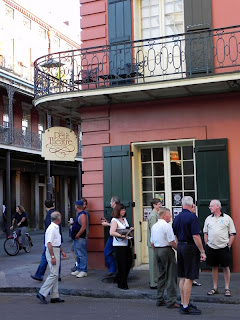 After indulging in delicious food and decadent cocktails at Muriel’s Jackson Square, we (Casey, Stephanie and I) strolled over to Le Petit Theatre, excited to finally see the local production of Hairspray. We arrived in just enough time to purchase a few more drinks and find our seats in the balcony before the music began.

Though I have never seen the Broadway musical performed live, I’ll never forget John Waters’ 1988 film version of Hairspray featuring Riki Lake in the starring role of Tracy Turnblad. The story is an underdog’s dream come true! How could I not fall in love with a hilarious musical that not only promotes racial unity and dancing to your own dreams, but where the fat girl actually gets the guy?

Directed by Ricky Graham, Le Petit’s local production of Hairspray was as grand as any other big city theater performance I’ve seen, yet managed beautifully on the small, historic French Quarter stage. It’s been ages since my last theatrical experience and I found myself running the emotional gamut throughout the performance. Through tears and laughter, I praised the powers that be for the company of women, as both Casey and Stephanie shared the teary eyes and bursts of unabated laughter with me…without humiliation.

The entire cast was amazing, performing with strong voices and practically flawless transitions from one scene to the next. Dianna Duffy was wonderful in the lead role of Tracy Turnblad, radiating so much energy and enthusiasm that it seemed to infect every other performer on stage…not to mention the audience. 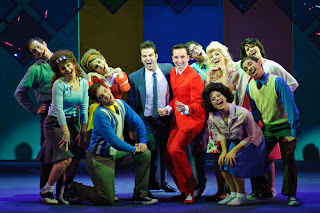 So many of the musical numbers rocked the house, but my favorites were “Welcome to the 60’s” with Dianna Duffy (Tracy) and Sean Patterson (Edna) and “I Know Where I’ve Been” exquisitely sung by Kesha McKey (Motormouth Maybelle). Plus, everyone in the audience (including me) went crazy for Sean Patterson (Edna) and Roland “Butch” Caire, Jr.’s (Wilbur Turnblad) sweetly romantic and gut-wrenchingly funny performance of “You’re Timeless to Me.”

After the show was over, we hung out in the (newly renovated) lobby and talked about our favorite scenes. The courtyard seemed all-a-buzz about the wonderfully energetic performance and it seemed obvious that no one was ready to go home…including the three of us. We sauntered over to the Pirate’s Alley Cafe and rounded off a perfect night with a few drinks and a lot of laughs, rehashing the evening’s highlights. I had almost forgotten how fun hanging out with the girls can be.