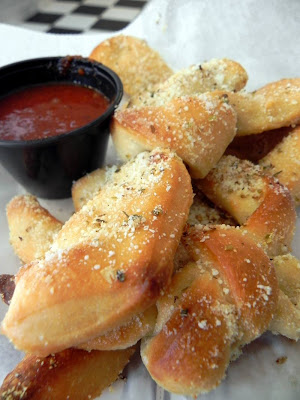 The Metry-Lady driving the cab screwed up her face and said “Where?” forcing me to tell her, for the second time, that we wanted to go to 3001 Tulane Avenue. She shook her head and turned back towards the steering wheel.

“It’s a pizza joint on Tulane Avenue?”
“Yep.”
“Do they have good pizza?”
“We’ve heard good things, but this will be our first time.”
“Pizza Care?”
“Pizza-car-ay”
“Okay, whatever you say!”

John and I arrived late in the lunch hour to the brand new, black & white tiled, very clean and even shiny Pizzicare. Only two other customers were dining in that day. We browsed the menu for extras, even though we knew exactly what we wanted due to a delicious-sounding Twitter post touting the Charcuterie Pie. 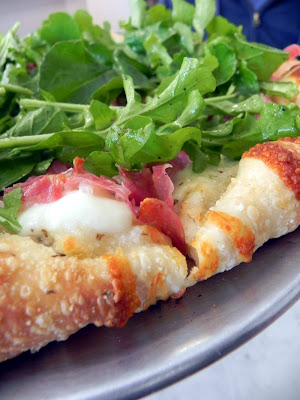 We started with some Garlic Knots and a Pizzicare Salad made with baby spinach, pancetta, red onion, mushrooms and artichokes with blue cheese dressing. We really enjoyed the dough, nice and crusty, but the knots seemed decidedly un-garlicky and mostly Parmesan. I was disappointed with the salad mainly because instead of offering me some thick, house-made blue cheese dressing (that you can get in almost ANY other restaurant in New Orleans), I was handed a packet of Paul Newman’s. Plus, there was no pancetta to be found, but there was a hefty addition of grated mozzarella.

Though we were both feeling a bit full by this time, we had no difficulty digging into the Charcuterie Pie with Genoa salami, pancetta, sopressata, fresh arugula, fresh mozzarella and garlic oil.  It was simply delicious and I made sure to include some of the peppery, bright arugula in every bite…which is no easy feat, let me tell you. By the time we left, there were only two slices left and half a salad. I guess you know now what I had for dinner!