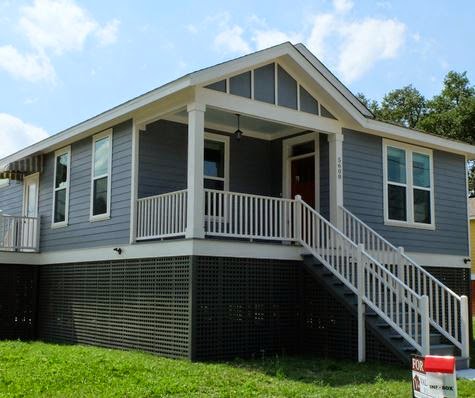 Last week, John and I were informed by our lender that the city of New Orleans had denied our application for the Soft Second Mortgage Program. We feel rubbed quite raw due to the reorganization of our financials, and similar to that sensation after losing your virginity, we’re sort of exposed and vulnerable, not to mention extremely disappointed. Most troubling of all, I can’t help feeling like that “flighty mistress” fate (or is it luck?) somehow had a hand in all of this.

Although I’m a dreamer and a fantasy buff through and through (you can’t shake the Mallorn leaves out of my hair), I’ve never subscribed to the idea of faith, any faith, except that which I still believe can be found in people. Regardless, I still don’t think I was meant to have this house.

For example, two days after John and I finished our home buying classes on June 23rd (which oddly reminded me of traffic school), we were told that the city wouldn’t be accepting any more applications for the Soft Second Program after July 30th. All of a sudden we were frantic. Though we’d searched the real estate listings online constantly, we never went to go look at houses because until the classes were over and we were pre-approved by the lender, we couldn’t make a bid. I don’t know if y’all have been watching the New Orleans real estate market, but it’s hot. Houses I adored online were disappearing overnight and there seemed no use in going to look if we couldn’t act almost immediately.

In less two days, I had a real estate agent, received the pre-approval and was assured we could make it before the deadline “no problem.” The only catch was, we had less than three days to pick a house. It all felt so damned rushed. We had a list of over 15 different properties and we quickly narrowed it down to 3.

Two of the houses were totally me, you know, what I blab about every single time I do one of these posts. They were both older homes, at least 80 or 90 years, one in the Lower Ninth Ward and one in the Carrollton/Hollygrove neighborhood. The Preservation Resource Center of New Orleans had restored the one in the Lower Ninth Ward, a shotgun-style, two bedroom/one bath, that still sported the high ceilings, transoms, gorgeous hardwood floors, a cute front porch and an awesome master bedroom.

The other house, over in the Carrollton/Hollygrove area, was once a small, one bedroom shotgun that had an addition built on in front. Though from the outside, the house shape seems quite odd, on the inside, it’s a whole other story with a unique, octagonal (hexagonal?) front room/dining room that leads up a couple of steps to a nice, updated kitchen with an island/bar and there were awesome, dark hardwood floors throughout. Two bedrooms led off of the kitchen and were pretty much the same size and there was only one, albeit largish, bathroom. Aside from the unusual front room, the best feature of this house was the big backyard. Three gorgeous trees grew in the yard and the owner had salvaged bricks from somewhere (they were really old bricks!) and had begun a patio. As with the rest of the house’s renovations, the fence was brand new and offered more privacy than I ever expected find in the city.

Finally, there is the third house, the house on Arts Street. This house is nothing like any of the houses I have been talking about. This house is brand new construction with hardy plank siding and windows made to withstand 120 m.p.h. winds. This house was built above the “base flood line,” filled with Energy Star appliances, security system, washer & dryer, central air & hear and closed cell spray foam insulation. This house had three bedrooms, two bathrooms and was built on a double-sized, corner lot. This was a Project Home Again house in Gentilly that had all the allure a new house brings.

A good friend of mine argued that I was helping to reinvigorate a devastated community by moving to an area where others feared to tread. Her viewpoint made me more confident in my decision and an area that felt oh-so suburban (a.k.a. Gentilly) began to take on new life as I researched the history of the neighborhood and began plotting out driving routes to and from the gym, downtown, John’s work, etc. Still, something just felt… off.

In the end, we lost the house on Arts Street due to an accounting snafu. Although I know it’s not my fault, I partially blame myself for the blip that bounced us out of reach. We fell short $90 of being in the right bracket for the amount of grant money we’d been counting on, and though we still qualified for some money, it wasn’t enough for the house we bid on and it was too late to restart the process. We were finished and the Soft Second money was completely out of our reach.

Was it fate? Should I have selected one of the other houses I liked so much instead of being “reasonable?” Instead of selling out? Is my house still yet to come or perhaps, was I never meant to have a house at all? Who knows? One thing’s for sure, it hasn’t stopped me from dreaming, but I think I might need to take a break for a little while.