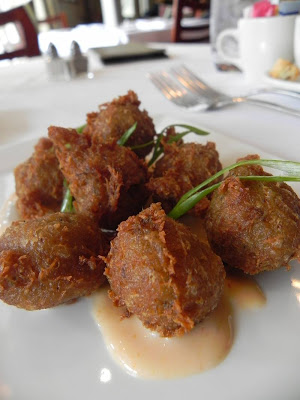 It was one of those “wild hair” moments when John and I woke up Sunday morning hungry and decided to go have brunch at Ralph’s on the Park. I’d frequently visited their website and driven past the restaurant, admired it’s gorgeous location and fantasized about a romantic springtime lunch on the balcony overlooking the moss-laden oaks and calm lagoons of City Park.

With the temperatures hovering somewhere around the low 50’s this past weekend, an alfresco meal was quite out of the question, but as we realized when we walked into the warm dining room, the inside was just as beautiful. We were led to a window-side table across gleaming hardwood floors and through iron-wrapped columns and as we sat down, we couldn’t help but admire the gorgeous, Degas-like murals adorning the back wall.
Excited and hungry, we placed our order, even choosing the special of the day as side and (strangely enough) it was the first dish to arrive. Though the idea of Goat Cheese and Herbs de Provence biscuits sounded delightful, the result was kind of dry and cold. We gobbled them because we were hungry, but we loaded it up with almost all of the butter provided. Let me tell you, that was a lot of butter… 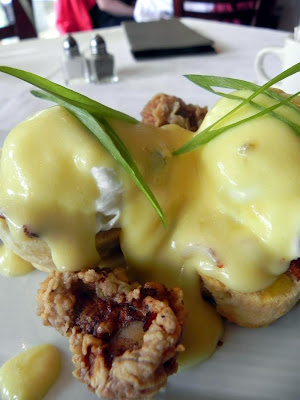 Before we finished, our appetizer came out, Blue Crab Beignets with a pepper jelly cream sauce. In my mind’s eye I saw large, fluffy beignets filled with the savory-sweet flavor of crab, so I felt a bit bemused at the result. They were basically small, crab cake-like balls that were deep fried and (sadly) quite greasy sitting in a small pool of the pepper jelly cream. We ended up eating them, though because the wait time between our appetizer and entree was inordinately long and, like I said, we were still quite ravenous.
The entrees finally arrived and we set our forks to dig in. I ordered the Tasso Eggs Benedict with fried P&J oysters, house-made tasso and jalapeno hollandaise atop buttermilk biscuits. The eggs were poached perfectly and the sauce and yolk softened the biscuit, but unfortunately the oysters were over-fried making them extra-tough and chewy. John chose their Louisiana Seafood Crepes with crab meat, shrimp and fish lying in a pool of smoked tomato sauce and garnished with fried shrimp curls. Both John and I only ate one bite before we declared the bland dish essentially inedible. We even opened up one up only to find a pile of mush with no discernible shrimp or fish, that is unless it had been thrown in a blender and pureed before slopping it into the delicate crepes.
John had pretty much lost his appetite and sent the dish back with no interest in ordering something to replace it. Striving to be optimistic, I ordered dessert – the Egg Nog Crème Brûlée with chocolate rum candy. Also, our server felt bad about John’s entree and gave us a free Banana Pudding. I was pleased with the crème brûlée as it had a perfectly crisp, burnt sugar top and a creamy custard beneath and the Banana Pudding was pretty good too until we tried the garnish of brûléed banana that tasted very green.
Oh well, what can I say. At least it was pretty?