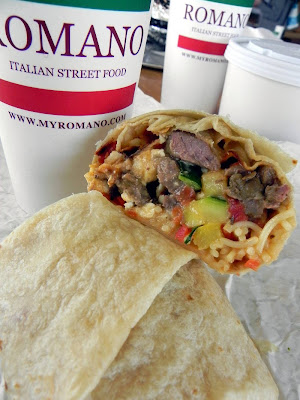 If there’s one thing you know about me, it’s that I don’t tend to eat healthy when I go out. Since I can’t afford to dine out everyday, my weekly jaunts to the outside world are indulgences, mini-events where I can spoil myself rotten and, unfortunately or fortunately, depending on how you look at it, lean chicken or veggie-laden salads are not what I consider “living large.” It’s not that I think proper nutrition and diet are unimportant, it’s just can be rather dull, especially when you try to eat right the rest of the week.

Another thing I don’t do is travel out into Metairie often. Not only do I lack a vehicle, but I tend to avoid the suburbs. I spent the first 33 years of my life trapped in a suburb of San Francisco, never really letting myself experience the diversity and culture of the city and I missed out on so very much. Needless to say, all suburbs, whether they be in Southern Louisiana or Northern California, are the same. “Little boxes on the hillside, little boxes made of ticky tacky…” Did you know that song was written about a city in the same county where I grew up? I digress… 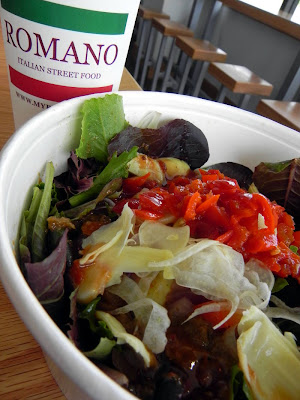 So with both of these factors already working against it, when I went to lunch with Casey at Romano Italian Street Food, I wasn’t expecting much, aside from the opportunity to hang out with a friend I rarely get to see.

Located on Veterans Avenue, “Romano’s” as its fondly been dubbed, is a cafeteria style restaurant, much like Felipe’s that I just wrote about, except Italian-style. Also similar to Felipe’s, Romano takes pride in keeping it fresh with salads, wraps, or “Piadinas,” and pasta bowls made to your specifications from a long list of ingredients, some of which are sourced from local distributors, bakers and fishermen. For example, the shrimp are caught in the Bayou Segnette and brought in regularly from a Westwego fishery.
My friend Casey got one of their rather popular Piadinas which is essentially a wrap filled with (in her case) grilled steak, angel hair pasta, feta cheese, peppadew peppers, thin slices of pancetta, artichoke hearts and a spicy tomato cream sauce. It looked and smelled wonderful, and I found out, as Italian as this dish may sound, the wraps are actually tortillas (piadinas are quite similar, made with flour and lard) made locally at Hola Nola in Gonzales. I had no idea a tortillaria existed in Louisiana! 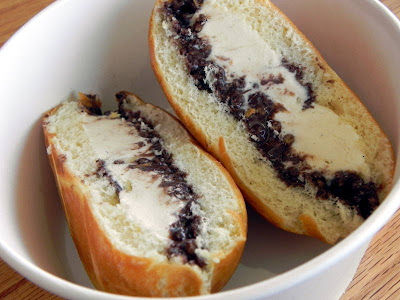 From all the different salad options, I ordered a one of their “Chef Selections,” a Spicy Tuscan Shrimp Salad (only 320 calories!), letting the experts make it for me. Aside from fresh, boiled shrimp, the salad had mixed greens, eggplant caponata (a cooked-eggplant salad), peppers, onions, roasted garlic, artichoke and shaved Parmesan in a sun-dried tomato vinaigrette…and you know what? I liked it! Not only did I like it…it was really filling. Romano does not skimp on the vegetable, cheese or shrimp and I still was struggling to finish at least half when Casey told me about their new dessert.

My ears pricked up at the thought of something sinful and they didn’t disappoint when I tasted their Gelato Panini. The chef took scoops of Angelo Brocato Vanilla Bean Gelato, topped it with a crunchy, chocolate topping (like a crumbled Nestle Crunch bar) and sandwiched it between a split King’s Hawaiian Sweet Roll. It was an Italian, Hawaiian and American sweet fest in my mouth and seriously, I am drooling about it right now. Excuse me, I need a napkin…