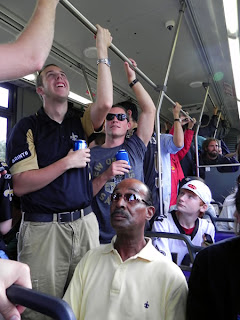 When I think about football, which is a rare occurrence in itself, there is only one positive association. It’s early Thanksgiving morning, the scent of Italian sausage and boiling giblets is in the air as my mom prepared the stuffing for the evening feast. Otherwise, football for me was always a real bummer.

First off, watching sports with my father sucked…. a lot.  Not only did he deem me too young (I heard stupid) to understand the rules, he wanted no noise aside from the not-so-funny announcers cracking inside jokes and the loud buzz of the crowd cheering in the background.

Don’t you dare play too loud or laugh too loud or (God forbid) cry while my dad was watching “the game.”

What made it even worse is that he would watch ANY game.  Baseball, football, golf, basketball, the freaking Olympics, endless hours of soccer (GOOOOAAALLL), bowling, horse races, boxing and even poker were all a part of my father’s television-watching repertoire.  Often, I would opt to read in my room and it took years to learn how to block out the constant humming noise…the sports noise. 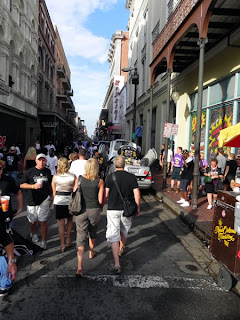 Much to everyone’s shock (including my own), I agreed to brave the Quarter on Thursday and hang out with my friend Ryan who acquired tickets to a Saints kickoff party at the Bienville House Hotel.  Admittedly, there would be free beer and food, a reserved area on Decatur to watch the parade roll by and all of this would occur while surrounded by the splendor of a gorgeous, historic hotel, but all this to watch football?

What would I do when the game started? Pretend?

It certainly seemed like the fates didn’t want me to go either.

John had to work that night at the gallery and we knew parking would be impossible and expensive, so we thought the streetcar would be the cheapest and most effective way to beat the traffic  Not 10 minutes before we stepped out of our apartment, the heavy, New Orleans skies let loose. 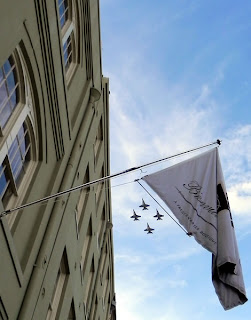 We huddled under a huge umbrella and dodged most of the massive puddles (will my Birkenstocks ever recover?), as we walked to the stop on Carrollton & Oak. We stood in the rain for about a half an hour before we started to get anxious. A few minutes later, we were informed that the electricity had gone out on the streetcar lines and buses were en route to rescue us.

Over the next 15 minutes we debated our options. Do we take a cab? Should I just drive John into the city and drop him off at work…a convenient escape route from this strange sports adventure I was taking myself on? Do I really want to walk around with wet pants for the rest of the evening?

The bus arrived and made our decision for us.

One and a half hours later, after riding on a bus that was bursting at the seams with vivacious sports fans decked in black & gold and irritably inconvenienced people who just wanted to go home, we finally arrived on Canal and Carondolet. We couldn’t help pausing, watching in awe as thousands of fans streamed past us towards the Superdome. 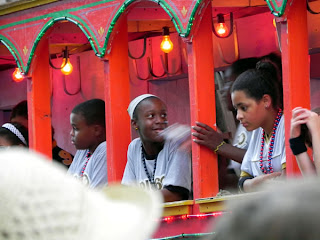 Walking against the flow of foot traffic on Bourbon Street, we said goodbye to Derek, our new-found friend who recently moved here from San Francisco, and made our way to the the gallery on the corner of Royal and Toulouse.

Ryan and I left John in a flurry of goodbyes and made our way to the hotel. Many Saints fans (and a number of Vikings fans too) were still scattered inside the Quarter, but most of the crowds were jam-packed around the parade route that skirted the outside, following Elysian Fields, N. Peters, Decatur and Canal. We arrived at the Bienville House just in time to get some noisemaker beads/party passes and a cold beer before heading out through the garage to catch the parade. 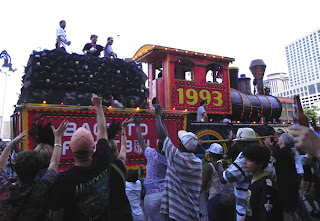 Even though the roll stopped in front of us for almost an hour, the overwhelming sense of excitement for what was about to come was palpable.  The floats and the beads and the incredible brass bands were wonderful, but the fun had barely started because this night was all about the game and the friends there, both new and old, watching it with you.

So when everyone picked their seats in the main lobby, seeking advantageous positioning between the huge spread (Muffuletta’s and sliders and po-boys, oh my!) and the big screen t.v., I sat there nervous, watching the devoted fans around us settle in to enjoy something I’d never, ever cared about. 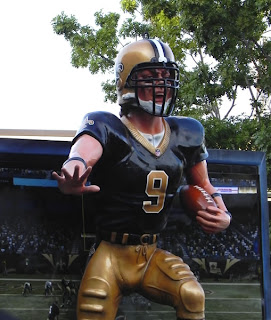 The whistle was blown and the first kickoff of the season…well…kicked off and the avid enthusiasts around me were all riled up and I listened as guys explained plays to their girlfriends, women debating calls by the referees as hotly as the men and an overall sense of togetherness and camaraderie that I had never experienced before, especially in relation to a sporting event.

As I watched the fans watch the game, I realized that I was happy for them. These adherents, devotees, followers, admirers, groupies, zealots and yes, even freaks had this shared passion that broke social barriers and even embraced rivals (there were two brave Vikings fans in the room).  I realized, at last, that while I may not be a “card-carrying” sports aficionado, I am truly a nut for its disciples.

Who knows?  Maybe one day I’ll actually watch the game…