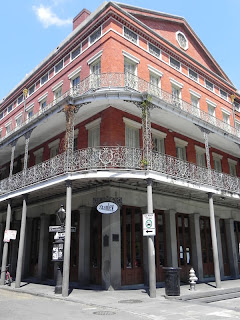 Could you imagine knowing the luxury of dining in a restaurant where you are served seven courses of culinary art, each dish an original masterpiece? Have you ever dared to dream of epicurean nirvana, where a chef’s heavenly creations enable sensory bliss? Do you have the financial wherewithal to make this dream a reality by visiting Chef Scott Boswell’s famous Stella! Restaurant?

I don’t. But I can afford to visit Boswell’s Stanley Restaurant in Jackson Square.

My weight was going down pretty steadily for a while, but this last week I have had more difficulty sticking to the “plan.” Surprisingly, my willpower has held out in regards to quitting smoking (going on 4 1/2 months now!), but I’m one of those people who eat when they get anxious or depressed and it seems like life has really been sticking it to me lately. I realize this isn’t a good excuse for a lapse, it’s just an explanation. At any rate, I gained four pounds this week and probably don’t deserve to cheat at all…but I did anyway. 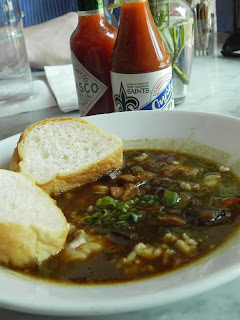 John had to go into to work on Thursday, so we decided to drive downtown a few hours beforehand and enjoy lunch in the French Quarter. It was a hot, sunny day and a simple stroll from the car through Jackson Square became a sweaty affair. I couldn’t help heaving a sigh of relief when we finally stepped inside the cool restaurant. The fans were spinning lazily and blessed air conditioning slapped us full in the face as we selected a table near the window looking out towards the square.

After trying to decide between breakfast and lunch (Eggs Benedict Po-Boy anyone?), we placed our order and watched the people-parade from the window. Our server brought out our drinks and my senses slowly returned as I sipped on the deliciously cool beverage. We couldn’t help but select a couple of Italian Sodas and John chose blood-orange while I opted for watermelon. Both were perfect, not too sweet and ice cold.

Although it was hot outside, I had to order a small bowl of gumbo and I am so glad I did. Flavored with a dark roux, Stanley’s gumbo included P&J oysters, chicken, Gulf shrimp and andouille sausage. Now, I don’t usually like seafood in gumbo, it has a tendency to be overcooked and chewy. This time I was not disappointed. The shrimp was the perfect texture and yet they still managed to soak up the rich, nutty flavor of the roux. John and I made quick work of the gumbo, soaking up the last drops with fresh sliced French bread. 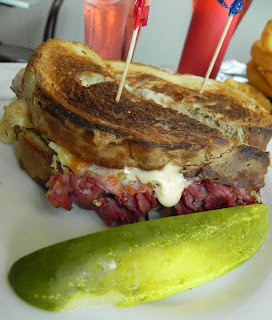 Soon after we finished, our entrees arrived and it was difficult to restrain ourselves as we snapped photos for this blog. We both had opted for lunch items; John chose the Big Stanley Burger, I ordered New Orleans’ Best Reuben and we also got a side of onion rings to share.

As it turns out, New Orleans’ Best Reuben could very easily live up to its name. I used to make Reubens frequently in my own home, but they never tasted quite like this. Corned beef and pastrami draped with both Provolone and Swiss cheeses, grilled sauerkraut and Russian dressing on toasted rye bread. The Reuben at Stein’s Deli is the only version to come close to what I devoured at Stanley. I would have to compare them side-by-side to select a winner…what a lunch that would be!

John’s burger was also very tasty, although I though it odd that the server didn’t ask how he wanted it cooked. 10 ounces of Angus beef topped with two slices of American cheese, three strips of bacon and Stanley’s “Special Sauce” made for a quite memorable and juicy burger. Both of our sandwiches were so large, we were only able to finish half, but the fresh, crispy onion rings were unable to escape our ardor. 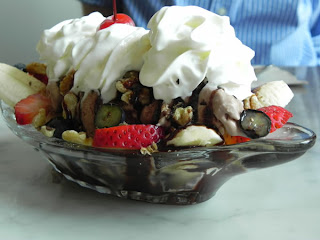 We saved half of our sandwiches for later on purpose. You see, although Stanley serves some pretty excellent meals, in essence the restaurant styles itself as an old fashioned malt shop.  So you can understand why we desperately wanted to save some room for dessert…especially the house made ice cream.

We agreed on the Stanley Split, which is basically a banana split featuring fresh berries (strawberries and blueberries), chocolate sauce and three scoops of Stanley’s own Chunky Chartres ice cream.  The house made scoops were full of chocolate chips and walnuts making a spoonful of ice cream feel like so much more than a mouthful, but we still finished the dessert with ease.

Even though I am financially unable to enjoy dining at a stellar restaurant like Stella!, I am glad that I possess enough cash to sample Boswell’s cuisine at Stanley and that’s good enough for me.