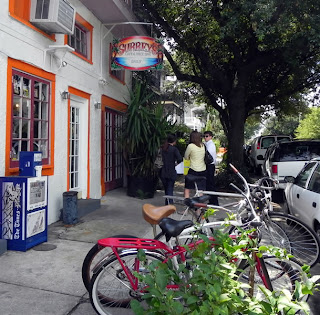 During my drunken days at the Circle Bar, I often saw Greg Surrey come in for a pint and anyone who could, would tell me about his incredible restaurant.  “You simply have to go for breakfast,” people would tell me. “It’s one of the best kept local secrets in New Orleans.”

Lately, Surrey’s Juice Bar has not been a secret at all. You can find reviews all over Yelp, Chowhound and a multitude of other online publications. Only a couple of weeks ago, Blackened Out visited Surrey’s second location that recently opened where Fuel Cafe used to be, right next to Le Bon Temps.

After years of hearing glowing reviews, I finally decided to go see for myself what the hullabaloo was all about. This is my 52nd cheat and I am down 72 pounds.

The new location is closer to home, but John and I decided to visit the original on Magazine between Euterpe and Terpsichore (music and dance) in the Lower Garden District. Since it was Friday at lunch time, we were not surprised to see a line stretching out from the front door, but after we put our name on the list, our wait amounted to all of five minutes. 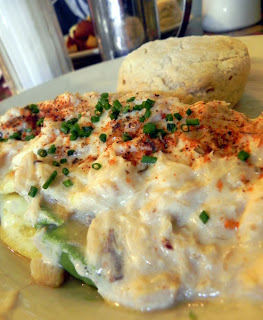 There were a lot of tasty items to choose from (I almost got the Caribbean French Toast stuffed with Pineapple Cream Cheese), but we finally made our selections and absorbed the bright, yet cozy environment. Tons of local art adorned the walls and I even recognized some cool plaques designed by my friend Will Smith, Jr., who is yet another Circle Bar denizen. Also, I couldn’t help grinning at the bikini-clad mannequin lounging in a hammock that was suspended  from the ceiling.

Before we got our second cup of coffee, our breakfast arrived. When going out for breakfast, I am not usually an omelette kind of gal, but I couldn’t resist Surrey’s Crab Meat Omelette stuffed with brie and fresh avocado and topped with a creamy, lump crab meat sauce. The eggs were fluffy and the avocados were perfect. Plus, I was ecstatic at the generous amount of crab meat that contained no shells whatsoever. I couldn’t resist getting a side of Boudin patties which were delicious with the perfect amount of heat. 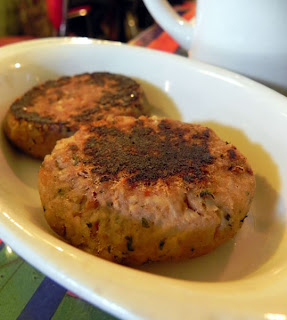 John ordered the scrambled eggs with smoked salmon, cream cheese, capers and green onions. His plate also came with what they call “hash browns,” but the thick wedges of seasoned red potatoes looked more like what would I call “country potatoes.”  Potato, potato; tomato, tomato…it doesn’t matter what you call it, they still tasted great to me. It’s just that John had a hankering for traditional hash browns, so he was a bit disappointed. His scramble was tasty, but with the capers and the salmon, I think a nice dill sauce would have really rounded out the dish.

John and I both selected a home made biscuit to accompany our entrees and it was crumbly on the outside and tender on the inside, just like my Aunt Edie used to make. Unfortunately, whomever was rolling them out used too much flour. I think a quick brush of melted butter before baking would have wiped away the excess flour and made for optimal browning and better flavor.

I was glad to see Greg’s quaint cafe was thriving. I am going to have to come back and try more of the menu because certain items like the Stuffed French Toast or the Migas with chorizo were calling my name.  Alas, there is only so much I can eat in one cheat!