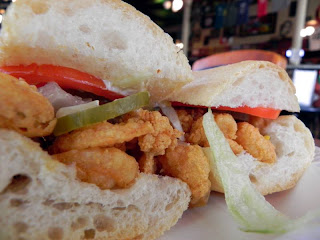 Overcome with laziness due to a deluge of work and a twice-a-week jury duty grind, I wanted nothing more than to enjoy my cheat in a place where I could let my hair down (so to speak) and be comfortable in flip-flops and shorts. This seemed like the perfect opportunity to hit up Tracey’s for some no-nonsense bar food. I hadn’t been into Tracey’s since their notorious move about a year ago and I was curious to see the new space for myself. This was my 90th cheat and I am down 81 pounds.

It was late in the lunch hour when John and I stepped into the cool interior of Tracey’s from the sizzling hot pavement on the corner of Magazine and Third. We knew exactly what we wanted, swiftly placed our orders at the counter and went to find a table. The bar was fairly empty at the time and I saw a few employees enjoying their own lunches in booths nearby. 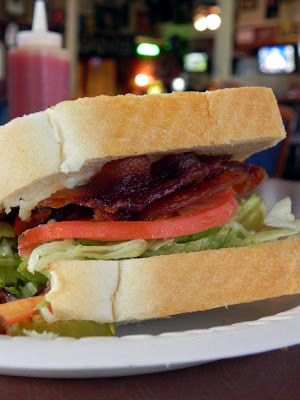 Our order came out fairly quickly. I chose an 8-inch fried shrimp po-boy on Leidenheimer bread (of course) fully dressed with an order of French fries. I know, I know… everyone usually goes to Tracey’s for the roast beef, but what can I say? I wanted shrimp. They were deliciously fried golden brown, large, juicy shrimp and I enjoyed every bite. I might be getting a bit spoiled though, because the fries were obviously frozen and what with hand-cut French fries becoming a dime a dozen these days, it was hard to go back to the old standby.

Being really hungry, I also ordered a Graffagnini (a.k.a. WOP Salad), because I had a yen for the tang of olive salad, muffaletta-style and because the non-PC name of the dish made me laugh. The salad was tasty, but unfortunately it seemed to be missing one of the key ingredients to a WOP Salad – the sardines! I was sort of disappointed, but at least the vegetables were fresh and the olive salad sated my craving.

John seems to be on a B.L.T. kick this month, not that I’m knockin’ it! At Tracey’s, his B.L.T. was served on thickly sliced and toasted white bread with several pieces of bacon, crisp lettuce and bright tomatoes. Simply, straightforward and good, he gobbled it down before I was even halfway through my po-boy. 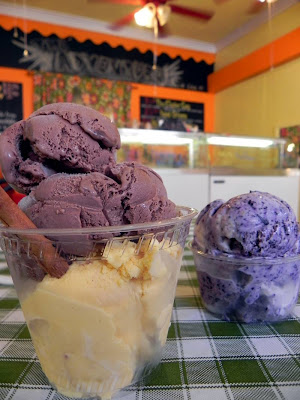 As we left the bar and were headed home, I jumped up, smacked myself in the head and exclaimed “We need dessert!” Luckily, there is a new ice cream shop on Oak Street I’d been wanting to try, so we just stopped by on the way home. Only open a couple of weeks, The Adventure is in what was formerly known as the only snowball stand on Oak, Queen of the Ball. Apparently, Brad Wilkins (owner of the Oak Street Cafe just down the street) jumped at the opportunity to open an ice cream shop with his daughter, who can be found behind the counter everyday hustling scoops.

I got a scoop of Chocolate and another scoop of Banana’s Foster while John settled for one scoop of Blueberry Cheesecake. The Adventure uses Kleinpeter Dairy ice cream which they tout as “hormone-free,” plus the shop emphasizes that their cups are made from corn, rendering them “compostable.” While I totally dig the environmentalist, healthful attitude towards ice cream and the scoops were creamy, delicious and reasonably priced, I left the shop a little dismayed. After all, where was the adventure?