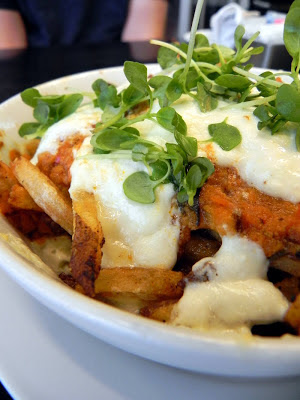 “…remember that what has once been done may be done again.”
-Alexandre Dumas, The Count of Monte Cristo

Childish though it might be, my first exposure to anything New Orleans-esque was at Disneyland. Family road trips to Disneyland in Anaheim are steeped in the memory of my favorite “land” in the park, New Orleans Square. What with the Mark Twain Riverboat, Haunted Mansion (Grim grinning ghosts come out to socialize!) and small, twisting streets lined with wrought iron and curiosity shops, it was easily the best part of the park. I munched on beignets while tapping my foot to a Dixieland jazz band or shopping for beads and masks. The finest moment in my vast, 8-year-old experience in dining occurred when I enjoyed my first lunch at the Blue Bayou.

As New Orleans Square was the finest area of Disneyland, Pirates of the Caribbean was the best ride in the world. What could possibly be better than being trapped in a jolly boat while witnessing a band of singing pirates as they loot, plunder and set fire to a hapless village in the dead of night? Cannonballs bursting in the water, drunken sailors almost falling on your head weighted by an excess of loot…I mean c’mon! It’s a childhood dream! Now imagine being able to sit under that same, imaginary nighttime sky in the middle of a swamp with the sounds of crickets and frogs, fireflies flitting in the distance while you dine on jambalaya, gumbo and sweet potato biscuits. Me? I’ll have the Monte Cristo. 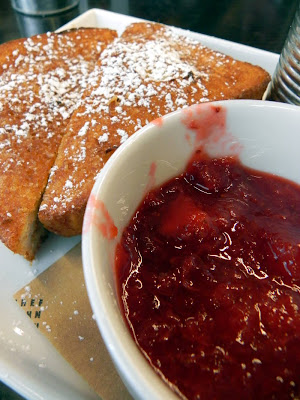 I’ve since had other Monte Cristos at a few not-so-memorable restaurants and until recently, they were pretty tough to find in New Orleans…the real one, not Walt’s incarnation. So, when John, Anne and I went to The American Sector at the World War II Museum, I knew I what I wanted as soon as I spotted it on the menu. If you’ve never had one, you’ve got to understand, Monte Cristo Sandwiches are this fat girl’s dreams dipped, fried and sprinkled with powdered sugar.

The restaurant was incredibly busy for a Wednesday afternoon and we had to wait around 20 minutes just for a table to open up. Once inside, I felt like I was on an aircraft carrier (actually toured the U.S.S. Constellation once), everything is very metallic and sleek. The hostesses were sporting 1940’s clothing and hairstyles, I almost expected them to bust a bit of “Boogie Woogie Bugle Boy” instead of smiling and showing us to our table. Strangely enough, it felt like I was back in Disneyland again. The restaurant seemed to smack of “theme-park quality” but perhaps that was only because of all the tourists. 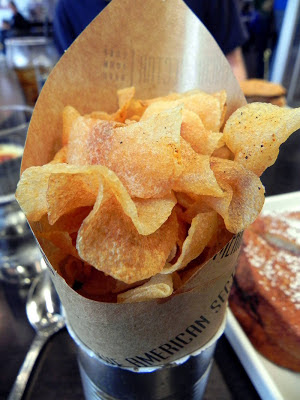 Although our server seemed rather indifferent as to whether we ate there or not, we placed our order and eyed the dishes coming out to other tables with envy. First up, a big bowl of Italian Cheese Fries with burrata cheese and (so the menu said) homemade Italian sausage. Unfortunately, our bowl seemed to be lacking sausage, but the crispy French fries with rich tomato sauce and salty, gooey burrata made up for it’s lack.

John ordered another old-time favorite of mine, a classic French Dip with buttery Thomasville Tomme cheese, shaved rib eye and Creole jus. I managed to get a bite only because I agreed to offer a bite of mine. Anne opted for the Perfect Pig Po-Boy with pork shoulder, ham, belly and crisp pickled vegetables. She thought it was a bit dry, but still flavorful and hearty.

Of course, I had the Monte Cristo. Basically a version of the French croque monsieur, this ham and cheese dream is often dipped, in it’s entirety, into a thick batter and served with preserves. Instead, this version had Chisesi ham, house-cured turkey pastrami and melted Gruyere cheese between two thick slices of crispy French toast. The whole sandwich was sprinkled with powdered sugar and served with their house strawberry marmalade. I enjoyed it immensely. All of our sandwiches also came with thick, crispy potato chip that were made at the restaurant. 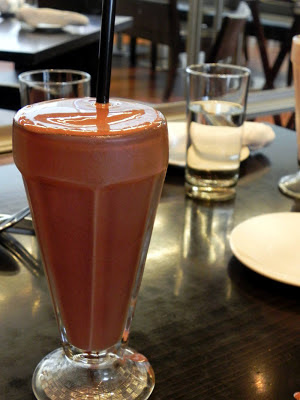 Our server became quite suddenly cheery and polite when offering to bring us the check and we were undecided about dessert. Since we knew there was a wider variety of shakes at the Jeri Nims Soda Shop a block away, we paid the tab and went for a walk. But when we arrived, we were treated quite rudely and told that none of the ice cream flavors we wanted were available anymore that day. We found this strange since we could see the flavor we wanted in the tubs lying open in the chilled case.

Not to be deterred from our quest for a good shake, we returned to the American Sector. This time we were seated immediately and we ordered three shakes; chocolate, strawberry malt and bananas “foster.” The chocolate was made using Valrhona and was therefore fabulous, not to mention perfect texture and temperature. John’s banana’s foster, however, was kind of runny, thin and generally disappointing. Anne’s was strawberry-licious but again, not the right texture for a milkshake.  Overall, I must say that I thought everything was quite tasty, but I would hope so considering the quality of ingredients. Unfortunately, it was also rather sloppy, from the missing sausage to the overflowing milkshakes, there needed to be a bit more polish, especially for what I would expect at a John Besh establishment inside the National World War II Museum.

Biggest regret? The restaurant was seriously lacking pirates, buried treasure and the sounds of the swamp…