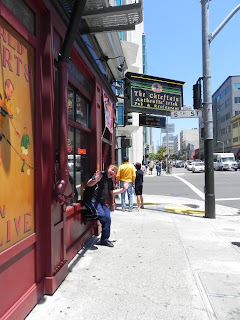 When Shalom and I get together, a brief lunch stop can unravel into a day-long binge and that’s exactly what happened when we stopped into The Chieftain.  We had planned to stop by her office in San Francisco and then head to the grocery store so I could make dinner when Shalom suggested we pop in at the corner bar for some lunch.  A couple of drinks turned into a couple more and before we could say “five o’clock rush hour,” both lunch and dinner passed us by in the darkened bar on the corner of 5th…but I don’t regret a single moment.

Opened shortly after the Prohibition repeal in 1934, The Chieftain (formerly known as the M&M Tavern) is a San Francisco landmark that became a journalistic hub due to its prime location near both the Chronicle and Examiner newspaper offices. It is the epitome of a great Irish pub with a long mahogany bar, excellent beer on tap and delicious, yet simple cuisine.  The Chieftain is also the quintessential sports bar that hosts events around all sports, especially rugby, football and soccer. When we arrived, anxious soccer fanatics crowded the small corner pub, yet they were almost silent in their reverent attention to the FIFA World Cup Finals. 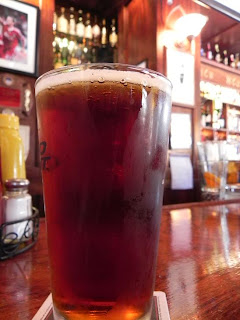 We squeezed our way through the avid sports fans whose eyes were glued to one of the many large screens and managed to find two empty stools at the bar.  Shalom ordered a margarita while I selected a Stella Artois, one of the many great brews they had on tap.  I placed our first and what I mistakenly believed would be our only food order while watching the fanatics watch soccer.

We decided to share their Corned Beef & Swiss Sandwich featuring thinly sliced corned beef slathered with their own house mustard on a soft bun served with thick-cut steak fries.  It was not difficult to polish off the meal since we were sharing it, but it was clearly not enough to last us all day at the rate we were imbibing,  We had already polished off another round before the last fry left the plate.

The third beer I ordered (can you see the drunken direction we were headed in?) was called Prohibition Speakeasy Ale created by a local brewery in San Francisco. It was extremely “hoppy” with a smooth, caramel finish and it was not difficult to slurp my way through several pints. 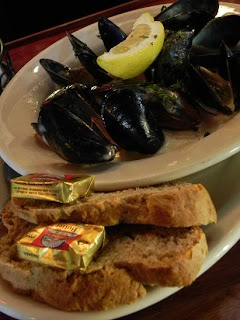 Shalom was feeling extra adventurous and decided that we should try one of the pub’s signature cocktails,  After debating between several options including “The Panty Dropper” (Square One Vodka, Midori, pineapple juice and a Grenadine sinker), we decided to go with the “Coconut Shamrock.”  This particular concoction is creamy and sweet with Baily’s, Kahlua and Malibu Rum.

After several hours of drinking, it was mandatory we eat again before we even considered stumbling out of the bar.  We ordered two more plates to share: the BBQ Pulled Pork Stuffed Mushrooms and the Prince Edward Island Mussels.  Although I enjoyed both appetizers, I couldn’t help being partial to the mussels, which were steamed in Bushmills Irish Whiskey and swimming in a garlic cream sauce with some house-made brown bread served on the side.  The mussels were perfectly cooked and bursting with flavor and I couldn’t stop myself from soaking up the cream sauce with a thick slice of buttered bread.

After nearly seven hours in the pub, and several cups of coffee, it was time for us to head home.  Although I didn’t get to make the dinner we had planned, I still had an excellent time at The Chieftain spending time with Shalom, making new friends and partaking of the pub’s fantastic menu. As I am writing this blog, I am reminded of the many journalists who used to frequent this very pub, stopping in for a quick ale while they scribbled away, elaborating a story on their latest lead.  How cool is it that my latest lead would originate from The Chieftain itself?  Very cool indeed…