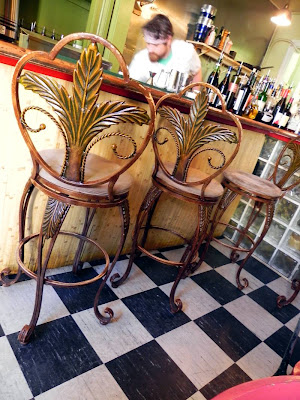 Ever since Casey and I lunched at The Green Goddess back in the beginning of August, John has had to endure endless descriptions of our oh-so stellar meal, time and time again. It got to the point where I began to feel truly guilty that I had experienced the Goddess in all her glory, but John had not. Since we had other errands in the French Quarter on Friday, I thought the time had finally come. This was my 69th cheat and I am down 78 pounds.

Parking at the cheap lot on Rampart, we trudged our way through the biting cold (yes, 48 is too damn cold for me!) and made it to the restaurant at 307 Exchange Alley right before my earlobes fell off. Luckily, we scored one of the four tables in the itsy-bitsy dining room even though it was smack-dab in the middle of the lunch hour. We ordered a couple of cocktails while we poured over the menu, trying to decide between all of the fabulous items offered.

Loving the local mythology, I couldn’t help ordering the Loup-Garou, a sweetly spicy concoction made from Mae de Ouro cachaça, Krogstad Aquavit, Taylor’s Falernum and allspice dram. Admittedly, that list had my head spinning too, but I knew that basically it was two different kinds of rum and vodka. There were so many spices it made my head spin (not to mention the level of alcohol). I tasted anise, cardamom, ginger, cumin, cloves and lime. Though delicious, I felt like a lightweight because it had me giggling after a few sips. 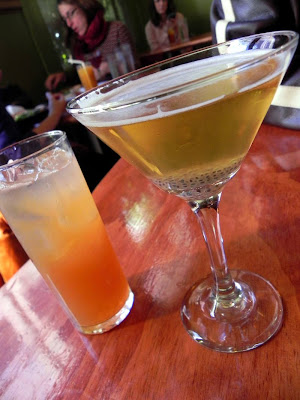 John ordered the Golden Eye which had us both gawking with what appeared to be a pile of tiny eyes at the bottom of his drink. They turned out to be basil seeds resting at the bottom of a martini glass filled with Tru’s Organic Jasmine Liqueur. Yep, I had to look that one up. Tru’s is made with jasmine flowers, green and black teas, fresh citrus and sweetened with organic sugar cane. It was wonderful! Who knew there were so many kinds of booze? Certainly not I…

We were both buzzing about nicely by the time our appetizers arrived, a dish of Truffled Manchego Cheese Grits and a steaming bowl of their soup of the day, Duck & Dumplings. You could see the curled shavings of truffle in the creamy, delicious grits and it was hard not to hoard it all to myself. With a bit of a fork fight, we managed to split it evenly, though we debated whether or not to lick the plate. The soup was wonderful with thick slices of juicy duck and pillowy dumplings floating in the rich, sherry-infused broth. If the drinks hadn’t already warmed me up, the soup would’ve done so with ease. 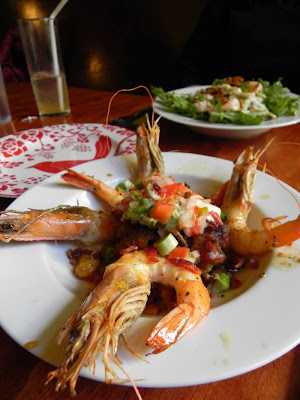 While we waited on our entrees, I couldn’t help peeking at what other diners were eating, what John dubs as being “nosy,” but I’m just curious! One table to the left had a huge cheese board and another diner was cutting into what looked like their Apple Cheddar French Toast. Our dishes came out as a few customers were leaving and one woman “oohed” and laughed, teasing herself for admiring other dishes though she had just finished a full meal. See! I wasn’t the only one!

What had her goggling was “Little Mummy’s” absinthe shrimp and avocado salad. A creamy pile of absinthe-poached, juicy Louisiana shrimp mixed with coleslaw overflowed from a large half of ripe avocado onto a leafy pile of arugula drizzled with olive oil and sprinkled with spicy, sliced almonds. As you probably have realized, I am not normally a salad-eater, but when I saw it on the menu, it reminded me of Shrimp Louie salad that I used to eat with my mom, only on crack!

John also had shrimp, a dish called “Mofongo de Camarones.” A grilled plantain cake served as the base for five huge, head-on shrimp that were sauteed in a honey-lime mixture and topped with guacamole, pico de gallo, bacon and a tequila crema (similar to crème fraiche). John was extra-careful to pry out every last bit of meat from the heads and the tails. I only took a small bite of the shrimp and cake, reluctant to deny him even a little of this fabulous dish. 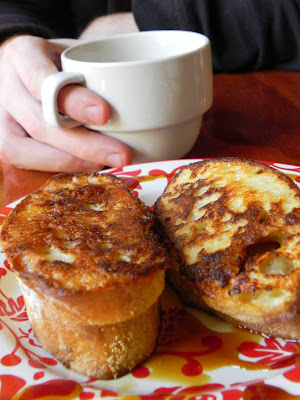 For dessert (you know there was dessert) there was much debate, but we finally decided on the Chocolate-Norwegian French Toast and a cup of Union Chicory & Coffee served hot with condensed milk. The French toast was made with buttery slices of ciabatta stuffed with chocolate, caramelized Norwegian goat cheese (gjetost) and drizzled with Steen’s cane syrup. I could have eaten the whole plate to myself, but, with difficulty, I shared it with John. Next time I’m getting my own plate or perhaps the Bacon Sundae? Regardless, I’ll definitely go back again….and again…and again.